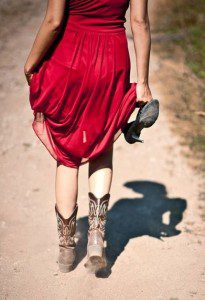 I was raised as a “modern” Evangelical Christian. But the more I read the more subtle the distinction I find between how I was raised and Fundamentalist beliefs (such as Quiverfull).

I didn’t wear long dresses/or skirts like the women and girls of the Duggar family, however I still had fashion specifications I was required to follow. I was still in many ways made to be lady like and modest, even if it was in pants. I rebelled and pushed this boundary as best I could and with dramatic flair. I even won my battles with mini skirts eventually. Probably due to my parents crumbling relationship; there was something else to distract them from my fashion rebellion. Similar to more fundamentalist beliefs I had little or no ownership over my body. What I did with it including cutting my hair was controlled or hindered by Vaarsuvius and Other Parent. I had to beg for permission to get my ears pierced when Other Parent did not want me piercing any part of my body, even for age appropriate earrings. Some of these things seem small or normal to parent child relationships; but the subtleties and the battles fought daily to be my own person were not small even if they were lumped in with what people considered “normal”.

There was nothing good or normal about how in our Evangelical patriarchal household Other Parent owned us, including our bodies. This was evidenced by their treatment of Vaarsuvius and the fact that they told them once they had made a commitment to on another that Vaarsuvius’s body was now theirs and it was founded in Biblical principals. The structure we lived with supported these ideas and passed them off as normal, it hid the insidious dark underside. Body ownership also meant that I was Other Parent’s object to do with as they willed; they did. I was sexually abused and I am strongly suspicious that Other Child was as well. But even at times this horrific act can be and has been defended by wielding the umbrella of the Bible. If Vaarsuvius was not sexually satisfying and upholding their spousal duty to Other Parent, child sexual abuse could be seen as a natural consequence. In some cases it has. Please reference Christina Enevoldsen and her blog Confessions of a Child Molesters Wife.

Quiverfull is based on the idea of having many children and raising them Godly to be released into the world like a quiver full of arrows to proselytize and convert others to following Christ. Modern Evangelical Christians similarly believe in raising Godly children to be a light in the world, and both sets of ideologies focus on training children to be soldiers of Christ. My family held those beliefs (close to that of Quiverfull) and this was evidenced by their association with the Christian Organization known as the Navigators. This organization focuses on recruitment, training and deployment. They have bases of operation in Colleges to seek out young people who are in the midst of identity upheaval. They preach salvation, identity and purpose. They are are also focused on our Military and have ministries on base. Ideally they recruit and then deploy missionaries across the nation and all over the world. Meet the Missionary Marines Corps. Hoorah.

The only reason that my family was not large had less to do with my parents beliefs and more with circumstances. Other Parent wanted more children and liked the idea of a traditional large family. Vaarsuvius was pushed by Other Parent to follow this more traditional path, but ended up being saved from it due to Other Parents health issues. Somehow they convinced Other Parent that there physical health meant that they could not be a fully supportive parent to a large family and that Vaarsuvius could not do it alone if something happened to them.

The lack of extended numbers of siblings did not stop Vaarsuvius from making me responsible for Other child or throwing me into the role of a caretaker at an early age. Vaarsuvius was a member of a Christian parent preschool group, but I was too old to do any of the programs. So instead of finding someone to watch me they enlisted me to help serve all the children groups their snacks, as well as being additional help as a caretaker for the toddler class or any other class that needed help. I have been taking care of babies and children since I was seven. It didn’t help that I had a natural affinity for connecting with toddlers and infants, this also meant I had to help Vaarsuvius and Other Parent during their Nursery duty at church and when they taught Sunday school to younger children. I didn’t have to be in a family of nineteen and counting to be roped into being a little mother.

This led to the assumption that I would grow up to be a mother. I remember being around the age of ten when Vaarsuvius finally sorted through all of our baby clothes, and had Other Child and I pick out which ones we wanted to keep for our future children. We also picked things that they wanted to pass onto us, and it was neatly packed away in boxes, our stand in hope chests. Eventually we had our own hope chests as well as these boxes stored away for us, beautiful hand crafted family air looms that smelled of cedar and future dreams. Vaarsuvius always assumed that without a doubt I would be married and pregnant someday, and that it is something I would want. I did get married, and the cedar chest is in my home. But it’s a different kind of hope chest now. It stores my favorite personal things, and is my office filing cabinet. And I won’t be passing it down to any children with a wedding trousseau stuffed into it.

I was always fairly quiet, due to nature and the expectation that I be a dutiful child. I cannot remember if I ever saw a copy of To Train Up a Child in our home, but like other christian families we knew that type of philosophy was pervasive. These too were supposedly modern Christians who would probably tell you that they believe themselves to be very different from Fundamentalists. But like my parents they were firm subscribers to Dobson and Focus on the Family. The ideals and philosophies from that ministry are not very different from  fundamentalist ones. The idea that a child should be bent to the will of the parent and to God is not different from that of the Pearls.

Other child and I were to be seen and not heard. We were expected to obey, and do it with a smile. Any hint of an attitude on our part was seen as defiance and resulted in consequences. This was true if you did not behave as expected and embarrassed our parents. I was once punished because Vaarsuvius wanted to introduce me to someone, but I was shy and hid behind them. This was seen as being unruly and embarrassing them and I was duly punished. We were fairly well behaved due to the fear of what would happen to us if we weren’t. This power dynamic did not change much even when we were teens, I was very nearly punished for being ten minutes late for curfew, and almost spanked by Vaarsuvius at sixteen for having an attitude. In fact this power dynamic did not change until recently. As an adult planning my wedding I snipped at Vaarsuvius who was being stubborn and unhelpful and was told “don’t you take the tone with me”.

Vaarsuvius has always called me their compliant child, as Other Child began to show their stripes and distaste for the way we were raised earlier on and in a more vocal fashion. I wasn’t though, I did what I need to do to survive and if that meant playing at being the compliant child so I did not get my butt beat, so be it. But inside I was constantly rebelling, I acutely felt a sense of injustice and was well aware that the way I was raised was often wrong.  Being a good little country girl saved me, it was a face I wore to protect the “Nora” part of me. This blog, and my pen name is named for that part of me. The compliant country girl saved me until I turned eighteen and could walk away.

Nora is a member of the SASBN

I am a former country girl and abuse survivor. I enjoy blogging because I find it personally therapeutic. It also allows me to share my experiences with others, and bring to light issues of abuse. I am a stay at home writer with a husband and house full of furry critters. I write under a pseudonym for my personal safety as well as to negate any potential legal trouble over sharing my story.