Preparing To Be A Help Meet: Part Three – Antsy Babies 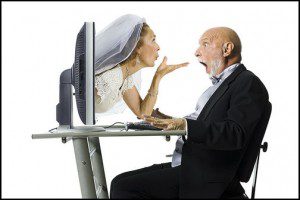 This next made-up story case is a hoot. Debi bites off more than she can chew when she tries to mix “online matchmaking” with a morality tale.

Case #2: An Old Antsy Babe
A mature, older woman had been single for a number of years. She decided to try an online matchmaking site to find a match.

I went online in my late twenties to get more experience dating and eventually find a partner.

She was offered a match and talked online with a very nice older gentleman with whom she enjoyed corresponding. They were cautious, only writing once a week, and then keeping their correspondance strictly non-personal.

Worst dating advice ever, Debs! If you write someone once a week and share nothing of interest, you will not get any responses. EVER.

He began to call occasionally. Oh, it was bliss hearing his voice. The friendship seemed to be progressing just fine, but weeks passed into months and still Old Joe showed no signs of talking the friendship up a level.

Oh, heck no. In real life, if the relationship isn’t moving, the woman (or man) should be checking other profiles out.

Then he missed a few weeks of calling and didn’t write for a while. The sweet, gentle Miss Oldie fretted, “Why doesn’t Old Joe write or call? Has something happened?” She impatiently waited a few more weeks before she wrote, asking if everything was all right. “I hope you are not ill or anything? I was concerned.”

That’s nice of her. Debi left out how Miss Oldie was getting to know two other guys while Old Joe went silent. Miss Oldie sets up a date with the guy in the next town; the other guy who lives in the next state will have to wait until she’s got her vacation time.

Old Joe wrote that everything was just dandy; he had just been down a little. So Miss Oldie felt better about waiting for another couple of weeks.

Old Joe stops writing and calling when he feels a bit down. That’s either severe mood disorder or personality disorder. Either way, tread with caution – or leave.

In terms of online anything, NO ONE waits a couple of weeks for someone to start communicating again after an extended silence. It’s not worth the lost time and opportunities.

Then she got very antsy. Whoa – hold your horses, Miss Oldie! Nothing has been promised; there is no understanding. He owes you nothing. Don’t demand that he state his intentions.

I agree: Old Joe owes nothing to Miss Oldie. On the flip side, Miss Oldie has no reason to wait around for Old Joe. And in real life, she’d be LONG gone…

After another week, Miss Oldie had had enough. She thought, “I would rather know that he is not interested, so I can get on with my (EMPTY) life. So she wrote Old Joe a very polite, dignified letter.

Why bother? He’s gone silent. Just move on, dearie. Go out with those other guys.

It was easy for the old guy to read between the lines. He had been married before and knew when a woman was telling him what to do and when to do it. He grinned and waited another month before responding. He wrote a polite, kind, thanks, but no thanks reply.

WTF? Old Joe’s a nutcase. Good thing that sweet, kind Miss Oldie took off. With any luck, another guy online is her sweetheart now.

The moral of the story is:
Patience is critical. Even when a push is kind, polite and thoughtful, it still exerts pressure that the man instantly perceives as asserting control. One last story will show you that there is more than one way to scare off a man.

So, Debi views Miss Oldie’s story as a failure. Huh. I view it as a success. After all, Miss Oldie got away from Mike Pearl…..i mean….Old Joe.

AntiPearl: Save a boyfriend for a rainy day – and another, in case it doesn’t rain.
Mae West

When Quiverfull and Celebrity Worship Collide
Yesterday was the public memorial service for basketball great Kobe Bryant and...
view all Nonreligious blogs
What Are Your Thoughts?leave a comment
Copyright 2008-2020, Patheos. All rights reserved.