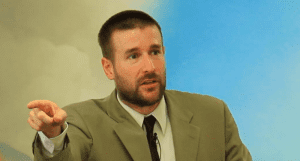 Turns out that a number of people showed up to protest Steven L. Anderson’s hate speech calling for the deaths of gay Americans by Christmas to wipe out AIDS. They came from all denominations and no denominates. One pastor held communion for the crowd while a rabbi was also on hand. Anderson himself came out and spoke to the crowd.

“A lot of businesses pay to have sign-wavers. I’m just glad people know we’re here,” Anderson said. “I’m not ashamed of what I believe, I’ll preach it from the house tops. And anybody who wants to read it can go to the Dollar Tree and pick up a Bible.”

Anderson said that he does not advocate violence.

“I’m not saying people should take the law into their own hands,” he said. “I do think it should be against the law (to be gay).”

On another hateful note: Anderson has put up a sermon on his website where he is claiming that President Barack Obama is illegitimate, like it actually matters instead of being a picky irrelevant point. He’s still the president of the nation. Barack Obama is Literally a Bastard! Trigger Warning! – only for those with a strong stomach!

December 9, 2014 Duggar Drama: Fighting For a Place in the Front Row?
Recent Comments
22 Comments | Leave a Comment
Browse Our Archives
Related posts from No Longer Quivering