The Smoke and Ash of Melting Memories

The Smoke and Ash of Melting Memories December 7, 2014 Suzanne Titkemeyer 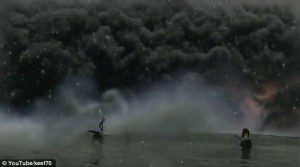 What are your earliest memories like?
I remember some events as what seem like still photographs from when I was very young – like the yellow diaper service pail on the front porch with an embossed stork on it, though the pigment in the pattern had faded. I remember my mother sitting beside my white crib, reading different books to me. Though I could not have had a visit with him after I was three years old, I remember my orthopedist. He had jet black hair and wore a smock like doctors wore in black and white movies. I remember really liking him, but I don’t remember talking to him or why I saw him. I remember my grand geek fascination with the magiciadias when Brood X made their seventeen year appearance, just before my fourth birthday. They are pictures in the album of my mind, accompanied only by the sense of joy, excitement, or curiosity that I feel when they’re called back into my consciousness. I have to rely on the history that I learned from my family to put those pictures into perspective.
The Scandal of Undeserved Shame
I would love to say that my first continuous memory of a whole chain of events follows some moment of joy. Most of the elements of the scene move like clips in a movie without sound. I’ve written about it before as “the thought seeds of the heart’s scandal,” I was terrified when I posted it online, as it felt painfully revealing.

Suffice it to say that this continuous memory was a trauma that taught to me a host of horrible messages, basically that in addition to not being able to trust my own experience and memory, I was damned to punishment no matter what I did. A child stole pennies from me, and I was punished for carelessness with money, believing that I’d misplaced it. When the child’s mother called my mother when the money turned up, I was punished for somehow provoking the child to steal. When I learned later that the child had not returned all of the money, I was punished and shamed again. The sweeping, continuous events seem like movie clips, teaching me some rather sick ideas about about who I was, how I fit into the world, and what I should expect from others.

I can vividly remember only a few audible memories of those events. I would hear my mother echo many of the statements many times again throughout my childhood. I clearly remember the taunting voice and laughter of that other child in that characteristic “nah, nah, nah” cadence that can be heard on every school playground. Though I have desensitized to this memory of confusion and shame, the scar can still be weak and tender, if the conditions are right (or wrong, depending on your perspective). I’m very human, and my “early wiring” was far from ideal.

If the gaslighter doesn’t realize that this is what they’re doing, the “gaslightee” may be able to negotiate with them to stop. If the behavior is intentional, then the manipulator doesn’t have much incentive to change. If the gaslightee wishes it to stop, they must be the one to initiate the change. They have to shift the balance of power in the relationship so that they are no longer ruled by the gaslighter.   In my relationship with my parents and despite forty years of trying, they would only accept being “right,” thus assigning me with the role of “100% wrong.” I worked at coming to an agreement with them – a plan of what we might do when they gaslighted me because my reactions to it were powerful and too painful for me to manage. After years of trying, I finally realized that if I hadn’t gained their favor by playing along for most of my life, it likely wouldn’t happen in the future. I changed the gaslighting dynamic by withdrawing from the relationship which was really just one of fantasy that I wished could be true.

They really don’t have anything that I want anymore, now that I’ve abandoned that fantasy.

~~~~~
I hope that Cynthia and Lydia Jeub will learn this wisdom far more quickly than I did. I’m glad that they both have a whole community of surviving and thriving SGAs for support and validation. And I’m grateful to Cynthia for her post which helped me remember where I’ve come from and how far I’ve traveled. She reminded me that though my own deep wounds have largely healed, I still need to honor my scars – and I need to listen to them. Though I wish that it all was far behind me, I still find myself cleaning up the soot left by the remnants of those ashen memories.  And that’s okay.
Proverbs says that truth comes at a price. Those who were gaslighted as young children must pay a high price in adulthood to claim their own perspective — a rite that most people take for granted. It’s been my experience that the truth and the price one pays to speak it doesn’t come cheap. May they be wealthy!

www.UnderMuchGrace.com (Discussing the phenomenon of Spiritual Abuse in Evangelical Churches)

December 7, 2014 Day 10 of 21 Days of Healing: WWJS?
Recent Comments
1 Comment | Leave a Comment
Browse Our Archives
get the latest from
Nonreligious
Sign up for our newsletter
POPULAR AT PATHEOS Nonreligious
1