Preparing To Be A Help Meet – Blog – Touching Before Marriage 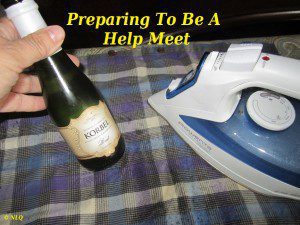 Due to a crazy-busy schedule, I’ve fallen off my pace of blogging Preparing to be a Help Meet because typing in the quotes from the book is surprisingly time-consuming. In lieu, I offer my most choice selections from the blog with the same name.

What levels of hell have Mike and Debi wrought? Apparently they’ve moved beyond beating the shit out of children and started messing with an entire generation’s sexual life….

Q: So I’m just wondering exactly how much touching a Christian couple can do before marriage. What is appropriate? Is it okay to hold hands? Kiss? Or should you not even touch at all? And if possible, could you give me Bible verses that talk about this subject? Thank you!

Back when I was a teenager in the 1990’s, we had discussions about premarital sexuality between peers. Bluntly, our discussions focused on how far beyond passionate kissing you could go before hitting forbidden sexual territory before marriage.

I’m feeling wistful that I had the freedom to assume passionate kissing was definitely allowed before marriage because I’m finding a group of girls/women who are arguing about holding hands as sexual activity.

A:
I know people who have touched while engaged and before. But for me I know I’m very vulnerable (and I would be a mess with all those doubled emotions that come with touching) so I’ve only allowed myself holding hands, but while engaged. I think its different for certain people but I never did really like how kissing is ‘okay’ while engaged. And yet I don’t have verses to prove this. But I know it will be special and that God made a man and woman to be intimate once married.
I mean think about it do you think Rebecca and Issac were aloud to hold hands or kiss before the wedding night? God knows your heart too, pray about it and discuss it with him.

The message is a little muddled, but boils down to “I have too many feelings if a guy touches me, so only hand-holding before marriage.”

Do I think Rebecca and Issac were allowed to hold hands or kiss before the wedding night? I doubt they knew each other for more than about 2 days between the moment the marriage was arranged and when they were legally married. That relationship was more like the marriages of royalty during the Middle Ages when a bride and groom would be married by proxy before she left her home country to so no one could kidnap and rape the bride as a way to prevent the marriage. (Charming, isn’t it?)

A: I have come to the conclusion of being completely “hands off” until at least I am engaged. No holding hands, kissing, snuggling, etc. I would be okay with touching if it is completely of a non-romantic practical bent. For example if he was helping me up a steep incline while hiking or during family prayer. I allow a few select men to give me side hugs but they are all men I have come to trust and are more like uncles or grandfathers to me. Until recently I held that I would keep this standard until the marriage ceremony, but I have began to wonder about holding hands after I am engaged. I guess that is when I would most be prone to stumbling, so I should hold my ground even then.

Something that I read was that we should see how many “firsts” we can save for our husbands. Our first kiss, our first candlelight dinner, our first “I love you”, etc. I thought it was a really fun idea.

Twice I have regretted the level of contact that I have allowed. One was when I was 14 and in a square dance with a group of young people. One of the fellows began to hold me really close and it really bothered me. I wish I had never gotten into the dance (I was pressured into it) and now hold to only dancing with my brothers or other girls. The other time was when I was 19 and a guy friend whom I new was interested in me caught me off guard with a side hug. Now, I wish I had slipped out of his grasp instead of allowing the hug. I think part of the reason I regret these things is because I later found out in both cases the guys were not of the noblest of character in how they treated women.

For me, touch is something I am very sensitive too and I know it would be very easy for me to stumble, or have incorrect thoughts, if I allowed physical touch into a relationship. Even if it is hard, and sometimes awkward now, I am sure I and my husband will be glad I have made these choice.

First, separating all physical touch out between “romantic” and “non-romantic practical bent” is going to lead to lots of hiking trips up steep inclines and hours of daydreaming about how wonderful family prayer time is. Just saying.
Second, I don’t think the “save everything” for your husband was supposed to devolve into a numbered list. Did “first time I petted a shark*” or “first time I crashed an entomology department open house” make it on your list? And yet, those are two of Nico and I’s favorite memories.

(*Actually, it was Nico’s first time petting a shark. I had petted sharks before. Nico promises my previous shark petting experience in no way decreased his pleasure in shark petting. Bet that’s a load off of everyone’s mind.)

Third, I wish the last paragraph was a satire of a The Big Bang Theory episode….but I don’t think it is. I’ve done a lot of square dancing. I’m struggling to see how a guy could hold a girl in an overly sexual way while square dancing. In teaching, we joke about the non-sexuality of a “side hug”. In fact, we often share stories of our best techniques to smoothly move a student who tries to get a full-frontal hug into a side hug before any accidental touching happens.

Editor’s note: They say great minds think alike. Yesterday NLQ Founder Vyckie Garrison and I talked about doing a new series here at NLQ involving the questions from the message board at the Preparing To Be A Help Meet site and ask our readers to answer those questions in a healthy way that would never occur to Debi Pearl and her followers. The new series will be called ‘Answering Preparing To Be A Help Meet’. Mel is certainly someone with a ‘great mind’ even if I cannot make that same claim, but we’re both on the same track with the questions from PTBAHM. Mel’s new article is right along that same line. How would you answer the questions above?

March 4, 2015
Quoting Quiverfull: The Sexiest Thing You Can Say To Your Man?
Next Post