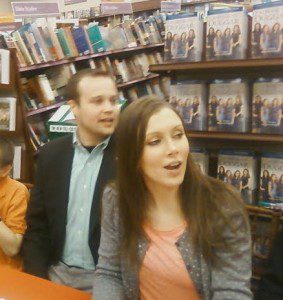 A round up of thought provoking articles on the situation with the Duggar family and son Josh after the revelations of his serial sexual abuse of young women.

From The Washington Post –  The Duggar’s dangerous cult of purity

The Post doesn’t tell the disgusting licked unwrapped candy bar story that is often used to illustrate purity, but they have one straight from Michelle Duggar that is equally bad. They are right, we do need to push back against this dangerous type of thinking.

Explanations of how gross sexual misconduct is handled in fundamentalist and evangelical churches along with her own cautionary tale. Also explains how women and children are devalued and harmed by the cheap grace and pseudo-repentance in those types of churches.

From Cosmopolitan Magazine – Josh Duggar Didn’t Make a Mistake, He Committed a Crime

Reasons why treating Josh Duggar’s actions as a ‘teenage mistake’ instead of a sex crime are wrong.

An article on how calling for the suppression of rights for the gay community in America while hiding a sexual predator is the worst kind of hypocrisy.

From Gawker – The Web Has Known About Josh Duggar For Years. When Did TLC Find Out?

Gawker asks an important question. When did TLC know? It seems disingenuous for them to claim they just found out when for the last eight or nine years if you Googled “Josh Duggar” the second search result was the molestation rumor. Did they knowingly put a criminal on television while pretending they didn’t know?

From Jezebel – Josh Duggar’s Police Records Have Been Destroyed

Confirmation that the record destruction has taken place. But it’s too late now because that police report is all over the internet. No taking that back now.

This story is about vile Evangelical blogger Matt Walsh blaming everyone but Josh, Jim Bob and Michelle for what happened. He especially blames liberals. Since I do not ever wish to increase the web traffic and hit counter at either Walsh’s blog or where this is posted at – Glenn Beck’s The Blaze, we’ve linked instead to Raw Story’s coverage of his words.

About time someone did considering how their own parents pimp them out and exploit them.

From TMZ – Josh Duggar — I’m Backing Out of Sandusky

Mic. Com has interviewed NLQ Founder Vyckie Garrison – Inside the Christian Cult That Told the Duggars to Blame Their Daughters for Their Abuse

Raw Story has republished Vyckie Garrison’s explanation on what Quiverfull actually is from here at NLQ – What Is Quiverfull?

Be sure to tune into CNN on Tuesday, May 26th at 10:00 pm est. Vyckie Garrison will be one of the guests discussing Quiverfull and the Duggars on the CNN news discussion program CNN Today. Check your local listings for times in your area.

May 24, 2015
Quoting Quiverfull: Part 5 Michael Pearl Answers Critics of "To Train Up A Child"
Next Post

May 24, 2015 Answering "Preparing To Be A Help Meet" - Why Am I Having These Feelings?
Recent Comments
30 Comments | Leave a Comment
"This is why we're doomed."
WMDKitty -- Survivor Christians Finally Speaking Out Against Sean ..."
"Not sure what your point is. "Don't vote because your vote won't make any difference ..."
argyranthemum Jill Rodrigues Does Not Want You ..."
"That's because they were so polite about it that nobody really minded."
Brian Shanahan Debi Pearl and the Seed Corn
"Any cola. But Barqs could mean rootbeer, Barqs cola or any of their flavored line ..."
Suzanne Harper Titkemeyer Debi Pearl and the Seed Corn
Browse Our Archives
get the latest from
No Longer Quivering
Sign up for our newsletter
POPULAR AT PATHEOS Nonreligious
1

Christians Finally Speaking Out Against Sean Feucht Shoeless...
Remember last week when I wrote about Bethel Redding's Sean Feucht and...

North Carolina pastor yells 'white power!' at a...
WHEN Baptist preacher Jesse Hursey told a crowd of Trumpites that, 'first...
view all Nonreligious blogs
What Are Your Thoughts?leave a comment
Copyright 2008-2020, Patheos. All rights reserved.