What do these ideas look like in real life? It varies, but not something I want for my daughter in any shade of gray, you?

“I guess when you are the center of your family (prophet, king, and priest) where all the women serve you (wife and unmarried daughters), it must go to your head. On top of that add homeschooling expert, president of a company/ministry, and leader in a church, sought after speaker, author, and not to mention one’s own sin nature, and what do you have?” http://surphside.blogspot.com/2013/11/questions-and-thoughts-about-vision.html

“Patriarchy, sounds like a word from the middle ages where feudal lords ruled supreme on their estates, doesn’t it? It’s not. Christian Patriarchy is a small, but vocal, minority among Christian fundamentalists . . .

Christian Patriarchy, apart from garnering Christians a lot of bad press, is blatantly anti-Biblical. How do I know? I grew up as a homeschooler in Christian Patriarchy. Well, grew up is probably an overly strong term as it implies Patriarchy happened in my home. And while my parents were exposed to Patriarchy, they never practiced it. But I was friends with a lot of Patriarchy families. I went to a college where I saw the products of Patriarchy in the flesh. The premise of Patriarchy is that males should make all the decisions. All. If your husband doesn’t like the type of toilet bowl cleaner you bought, you make a midnight Walmart run to fix it.

Because the husband, father, sometimes even brother is such a lofty figure, if anything goes wrong in the household, it is invariably the woman’s fault. Your husband criticizes your cooking and the dirty house all evening while putting his feet up and refusing to lift a finger for your three wailing children under three? (Patriarchy is notoriously anti-contraception.) It’s your fault for not vacuuming before he got home. Your husband starts viewing porn on the side? It’s your fault for “ballooning out” to a size 10 after giving birth to his six children. If you were “meeting his needs” at home, he wouldn’t be doing it . . .” ~ Anne Garboczi Evans, http://thoughtcatalog.com/anne-garboczi-evans/2014/04/doug-philips-sex-scandal-and-the-heresy-of-the-patriarchy/

I was told to suppress my own desires and feelings . . .

I was only allowed to be the way others wanted me to be . . .

The survivors will is systematically suppressed, curtailed . . .

Each woman says that she has lost her identity, and her personality, and her femaleness.”

Some of the attitudes about women and children in these groups perpetuate this sort of environment. Look at how so many of these victims were counseled to deal with pedophiles. Keep it in-house. Wives side with husbands, etc. What one thinks he owns he also thinks he can do with whatever he likes. How’s that prophet, priest, and king thing workin’ out for ya? Evil, truly evil, people can play the part of good holy people and fly under the radar for a long time if they are clever. Peck’s book People of the Lie quotes several people who committed heinous crimes and who describe how they were able to get access to innocent victims by pretending to be godly church members. Chilling. Modern Christians are being trained to not be Bereans. In fact, how often are they told NOT to be Bereans, just to obey their leaders, elders, etc. A few weeks ago I posted a quote from Mark Driscoll where he said rebels are those who “do word studies.” This mindset is crazy. The celebrity status both within homeschooling circles and evangelicalism in general invites this sort of behavior. People are far too trusting of the “who’s who” crowd. And those who are part of it become much lest circumspect. A false theology of “blanket forgiveness” is being taught in church after church. This article is one of the best discussions on what true and righteous forgiveness looks like I have ever read. Is this what you have been taught? It sure hasn’t been my experience and, in fact, I have been admonished more than once to simply “forgive” false teachers rather than examine and expose false teachings! Ludicrous!!! The nutty makes it way into the mainstream of the church and becomes acceptable first and then embraced. There are so many of these examples but here is one I ran across yesterday. Scott Brown from the Family Integrated Church network, you know, they guy who claims that Sunday School is unbiblical and the end of Western Civilization as we know it fame is a guest speaker at, of all things, a DISCERNMENT conference! This gives credibility to so many of the things we all know have been so dangerous and destructive to homeschooling families. The mind reels!!!http://www.thatmom.com/2013/05/24/hows-that-prophet-priestand-king-thing-workin-out-for-ya/

“Abuse is fundamentally a mentality. It is a mindset of entitlement. The abuser sees himself as entitled. He is the center of the world, and he demands that his victim make him the center of her world. His goal is power and control over others. For him, power and control are his natural right, and he feels quite justified in using whatever means are necessary to obtain that power and control. The abuser is not hampered in these efforts by the pangs of a healthy conscience and indeed often lacks a conscience.” from A Cry for Justice blog.

By removing the wife from a joint priesthood with her husband and making only the husband responsible for seeking God’s will in all family decisions, those who espouse the unbiblical position of the man as the sole priest in the home, relegate the wife’s participation to a secondary and subordinate position in the home. This dismantles the woman’s equality as joint-heir with her husband and threatens to limit her spiritual growth. (Cheryl Schatz) You are so right on with this post. One of the HUGEST things we have to grapple with is the fact that setting up the Husband As Priest means we are setting up a mediatorship… Patriarchists/complementarians are essentially saying that women need a mediator between them and God–first, daughters under their fathers and then wives under their husbands. http://strivetoenter.com/wim/2006/11/11/husband-as-the-priest-of-the-home/

On the one hand, there’s no way to write about the issues I care about without spending a significant amount of time writing about privilege and power. The abuses that this blog focuses on are a direct product of inequitable distribution of power in the church, and abuse of religious authority and influence to promote teachings that oppress and harm people. So I need to talk about power, and powerful people – and when it comes to talking about Christianity in the U.S. or American society in general, that means spending a good amount of time talking about privileged white men. http://arewomenhuman.me/category/church-cultures-of-abuse/sovereign-grace-ministries/

Is this the world we want for our daughters and our sons? Is this what we want for their future relationships? For the organizations they will serve in, the churches they will worship in?

Along with the highly patriarchal “messages” of pornography being absorbed into our cultural consciousness, the whole continuum of these more “holy” attitudes of male preeminence (I am king, I am your priest, I speak for God, defer your will to me) are on the rise in many organizations and churches and exaggerate the vulnerability factors in our world that already make girls and women disempowered and vulnerable—body, mind and soul—to their full personhood being violated, degraded, diminished, and in varying degrees enslaved, under the will of another human being with a God complex. Picture these religious ideas in highly patriarchal cultures around the world where human rights are not as fully established as here and where girls are treated as lesser than humans who, from a young, age serve their households like cinderellas. Picture how these ideas would sound to a girl or woman who has been abused sexually or to a girl like my own who still believes in her own equality and that the world is fair.

Watch out for any hints of these harmful “holy” ideas being exported or imported (i.e. right here in New England, hoards of patriarchal “missionaries” coming to plant churches . . .) which advocate a gender-tiered social structure where our girls are not free to thrive and flourish as full human beings in the world. WWJD? What would Jesus teach? How would Jesus treat our girls? Use your own smell test and be on guard for anything less. Take a second look. Find the deeper truth in your Bible. Be the change you want to see, for our girls, for our boys, for our own human dignity, for the winsome witness of Christ in our world, for love of humankind. 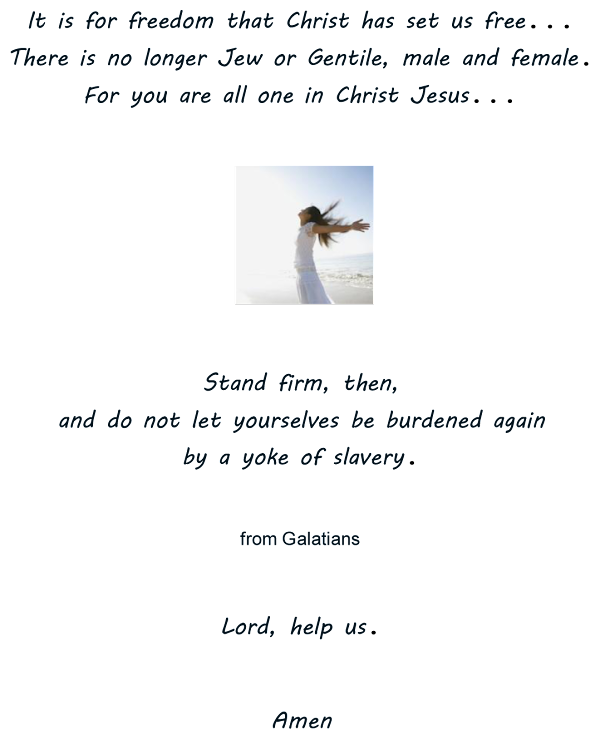 June 23, 2015 Quoting Quiverfull: Part 1 Homeschoolers Embracing The World?
Recent Comments
2 Comments | Leave a Comment
Browse Our Archives
get the latest from
Nonreligious
Sign up for our newsletter
POPULAR AT PATHEOS Nonreligious
1