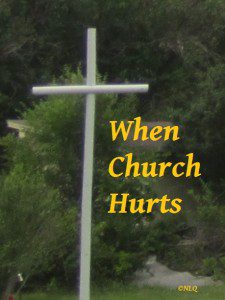 by Ellen cross posted from When Church Hurts

My friend, Rebekah Gilbert, has written a great blog post about Fear.  Her thoughts turned on a light bulb in my head because I realized just how true her words are.  You see, the spiritual abuse that was meted out to me had one purpose only:  to create fear in my heart and in my life.

Perhaps the perpetrators’ ultimate goal was to get me to leave, but they did this in such a way that over the decade-plus years of spiritual abuse, I became terrorized.  And, just as my friend, Rebekah, realized, once I began to stand up to my abusers, the fear that they had placed on me returned to them.  Such great fear that their only recourse was to ban me from the church.  Their original intent of using fear to cause me to leave didn’t work.  And when they realized that I was a person to fear because I was telling on them through my blog, again, their solution was that I needed to be forced out – to leave.  Finally, they accomplished their original goal.

It really comes down to how we choose to react when faced with fear:  Fight or Flight.

When faced with the fear that they forced upon me, my response was to fight.  I stayed the course and did all that I could to rectify the situation.  For more than a decade I tried.

But when the church leadership was faced with fear, their response was flight.  Because they couldn’t defend what they had done, nor did they have the wherewithal to work toward rectification.  They demonstrated fear, panic, lack of character and integrity, lack of faith.  And they proved their disregard and disrespect for me, for the church, for Christ, by their unwillingness to stay the course and try to reach that very pinacle of what Jesus died for:  grace, reconcilliation, restoration.

Of course, they can spin the story to suit their needs.  They can tell those whom we considered friends and associates at the church anything they want to make us look like the bad guys – especially me.  They can use all of the power of scripture to shore up their argument that I am the problem and I deserved to be ostracized, judged, persecuted, shunned, and ultimately banned from the church.  And I have no recourse or ability to respond or defend myself because they have convinced people that they are right and even if they didn’t say it out loud, the people know that their response is to no longer associate with me.

Once again, there is that fear factor.  Because people know that if they are caught having any kind of relationship with us, they may very well pay the penalty of not being part of the “in” crowd, the “inner circle,” or simply  whose worthy of pastoral care in times of crisis. This was blatantly demonstrated only a few days after we were tossed out of the church when one woman took the courageous step of meeting with me.  One of the pastors’ daughters was in the coffee shop where we met and this woman was incredibly fearful that the daughter would report to her father that she was with me that day.  She even told me that she was considering stopping by the church on her way home to explain to this pastor why she had decided to meet with me.  She was desperate in her need to attempt damage control.

So today I am in wonderment that, as Rebekah points out, the bible repeatedly says “Do not fear, do not be afraid.”  And yet, our churches function almost entirely on fear.  Is this really what God intended?  Is this really what the angels meant when they said they were bringing good tidings of great joy? For ALL people?

I want to encourage you that if your church or your pastor or your leadership is instilling fear in you or in anyone, rather than joy, you might want to reconsider whether or not that church is where you should be.  God did not give us a spirit of fear, but of power and love and a sound mind.  If you feel like your church is doing some crazy-making in you – that is not a sound mind.  And I know from experience that crazy-making is a direct result of fear.

Several years ago I was the victim of a most heinous form of abuse unlike anything I had ever thought possible. Not having been raised in a Christian home, my first experience with Christians and pastors had been one of joy, grace, fellowship, love, and delight. When faced with the horrors of having the very essence of who I was as a woman of faith stripped from me in what I can only describe as spiritual rape, I couldn’t comprehend what was happening. This was church, after all, and I believed that everything works together for good for those who love God. Somehow, it didn’t make sense that everything was not working together for good. When I was finally able to resign myself to the fact that God was not going to “work this out,” I made my escape and sought a safe haven.
Little did I realize that I was going from the proverbial frying pan into the fire. Oh, how I tried to beat back the flames! Oh, how I prayed and pleaded for mercy, for grace, for a chance. “But hate is strong and mocks the song of peace on earth, good will toward” Ellen.
He who began a good work . . . had forsaken me . . . and the silence was more than deafening . . . it was defeating. So intertwined were we, that as God went missing, so did Ellen. But I am nothing, if not tenacious.
~~~~~~~~~~~

October 26, 2015
Quoting Quiverfull: Your Entire Identity Is As A Mother?
Next Post

October 26, 2015 Not Quoting Quiverfull: Hanging Onto Your Faith After Leaving
Recent Comments
1 Comment | Leave a Comment
Browse Our Archives
get the latest from
No Longer Quivering
Sign up for our newsletter
POPULAR AT PATHEOS Nonreligious
1