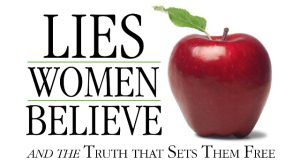 I think it’s possible that we might be over the hump as far as how terrible the chapters can get. The only sections left for the Lies Women Believe review cover children, circumstances, emotions, and the concluding segment. The “Emotions” chapter might be a bit rough, but today’s, compared to last week’s chapter, is a cake walk. Of course, almost anything compared to a doctrine that could kill women seems like a breeze.

This week’s chapter covers what Nancy thinks about children, which means an extensive discussion on, you guessed it, family planning.

She roots her argument in setting up what I view as a false dichotomy: God is the “Creator, Author, and Giver of life” while Satan is “a destroyer of life” (169). According to her, this means that only people who agree with Satan (shiver) would ever consider not having as many children as God sees fit to give them.

I think there are two problems with this, and I’ll start with the most obvious: according to the typical evangelical position on the Bible, God is very much in the business of “destroying life.” He orders mass genocide and infanticide repeatedly throughout the Old Testament, and depending on which view Nancy takes of Revelation, the incomprehensible death toll represented in the Old Testament will be dwarfed by the End Times. There are plenty of defenses of this “genocidal, infanticidal, pestilential god” (as Richard Dawkins put it in The God Delusion), but regardless of how you go about justifying this, if you believe that God ordered those mass killings, you don’t really have a whole lot of room for this “God is about Life, Satan is about Death” argument.

The second problem is that deciding not to get pregnant in the first place isn’t a conversation about “destroying life.” It’s a leap to say “Satan wants to destroy life and therefore you should not practice any family planning!” Nancy’s not just talking about hormonal contraception, too, but any form of sterilization or NFP, so this isn’t about whether or not the Pill is an abortifacient (which it most definitely isn’t). She’s trying to get us to believe that preventing life and destroying life are the same thing, but fails.

She also tries to argue that “A generation had to be indoctrinated in the ideal of planning children around personal convenience before abortion could become popular” (170). Factually, she’s just wrong. The abortion rate didn’t change significantly after Roe, and any change could be attributed to the reporting differences. What we do know for a fact is that even though reported abortions climbed after Roe, they have been steadily declining ever since.

Also, abortion is old. Like dawn-of-ancient-civilization old. From pennyroyal to quinine mercury to crocodile dung, people have been near desperate not to be pregnant for basically as long as we’ve been getting pregnant. We didn’t need to be “indoctrinated into family planning” to want abortion.

Two more problems with this, and then we’re done.

The process by which most people– even “believers” determine the size of their family is often driven by fear, selfishness, and natural, human reason :

She lists others, but those two really shine a bright light on how out-of-touch Nancy is. Many people who are having abortions aren’t worried about college tuition, they’re worried about food. Babies are extremely expensive, and unless you’re also willing to subsidize childcare and massively expand WIC and SNAP, you need to sit down and shut up.

As for the second one, pregnancy is dangerous, especially in the US. Many women should not become pregnant because it could kill them; if it doesn’t kill them, it could radically and permanently affect their health. In my case, it is entirely possible that pregnancy could wreck my body pretty bad. With my fibromyalgia and endometriosis, keeping up with multiple children could be more than merely “exhausting”– it could be impossible.

Last problem: she quotes Paul from I Timothy, telling younger widows to “marry,” (171), but somehow oh-so-conveniently forgets I Corinthians 7:8, where Paul also says that young widows should “remain unmarried, as I am.”

CHILDREN NEED TO GET EXPOSED TO THE REAL WORLD

She uses the “greenhouse” argument in this section (175). If you’ve never heard it before, it’s basically saying that children are too delicate and exposing them to “the elements” of “The World” will destroy them. She uses her own life as an anecdotal proof: she was almost totally unaware of major world events and pop culture, and this is why she’s such a godly woman now. In her words:

I did know what few other young people knew. I knew the difference between right and wrong. (174)

Just … the sheer hubris of this is boggling. Also, the idea that children should grow up inside a “greenhouse” that locks out any possible negative influence is a driving force behind conservative religious homeschooling, and if Nancy can use her own life as a “proof” of just how wonderful this “greenhouse” is, I should be able to use my life as a “proof” of how disastrous it can turn out. I can point to my “sheltering” as one of the biggest reasons why I ended up in an abusive relationship and raped.

ALL CHILDREN GO THROUGH A REBELLIOUS STAGE

When I was a teenager, I was solidly convinced that a “rebellious stage” was completely unnecessary, and my lack of experience with one made me better than other teenagers. I knew my place. I knew to respect my elders. I knew that “throwing a tantrum” (read: expressing a healthy emotion, like disappointment or anger) was completely and utterly uncalled for.

I never had a teenage rebellious stage, but what happened instead was I directed all the pent-up frustration, anger, rage, disappointment, fury, sadness, and melancholy inward, and it became an extremely toxic bath that I stewed in for over a decade. Being cut off from the experience of a “teenage rebellion” ensured that I wouldn’t have a healthy way to handle, express, and process strong emotions– and after watching many of my adult friends who grew up like I did try to figure this out, I’m confident asserting that nothing good comes of this anti-teenage-rebellion attitude.

The second disagreement I have with Nancy about this is that while experimenting with drugs and related paraphernalia isn’t a necessary component of growing up in America, individuation absolutely is. One day we realize that we are not our parents, and that’s actually a good thing. I was able to assert my own identity as separate from my parents when I started graduate school, and it was rough having to go through that process so late, as a living-by-myself adult.

While Nancy is right about one thing– just because one “prays the sinner’s prayer” at four, five, six years old doesn’t necessarily mean anything. As a universalist, obviously I put a lot more stock into “actually bothers to act like Jesus” as my definition for Christian, but I watched other children growing up pray the sinner’s prayer half a dozen times over the course of their childhoods, so it seems obvious that the “sinner’s prayer” when you’re really young doesn’t mean as much as staying committed to the religion as you age.

However, Nancy goes on to give women a meter for determining whether or not their child actually is a Christian, and it bothers me because it’s based on an extremely narrow interpretation of Scripture. She uses various selections from I John, and includes things like “this is how we know we are in him: whoever claims to live in him must walk as Jesus did” and “if anyone loves the world, the love of the Father is not in him.”

In a way, I agree with this: if “Christian” means to “be like Christ,” than being like Christ is sort of, I dunno, important. I do my best every day to live as Jesus did– to embrace the marginalized, the oppressed, the poor, to take care of those in need, to live a radical life committed to equality and love. I try not to “love the world”– to accept oppressive power structures, to ignore systemic and institutionalized racism and classism, to live by the motto that “greed is good,” to base my definition of success on power and wealth.

Pretty sure that’s not at all what Nancy thinks, though, not with all her bits about how “homosexuality is an example of a life-destroying practice” (169).

Nancy does what basically every other conservative evangelical does: she take her interpretation of certain passages and holds them up as things every “believer” agrees with, and that not agreeing with her interpretation means that one doesn’t have the “necessary fruit.” It’s a convenient way to dismiss anyone who doesn’t think exactly the way you do.

Samantha blogs at SamanthaPField.com and is a member of The Spiritual Abuse Survivor Blogs Network

October 6, 2015
Quoting Quiverfull: Why All the Hormone-Blaming?
Next Post

October 7, 2015 Quoting Quiverfull: Being a Stay-At-Home Mom is Unsafe Too?
Recent Comments
7 Comments | Leave a Comment
Browse Our Archives
get the latest from
Nonreligious
Sign up for our newsletter
POPULAR AT PATHEOS Nonreligious
1