Got up this morning to two sets of surprising news. First, there is now a site up that defends Bill Gothard. It’s name, ‘Discovering Grace’, is a play on words on the website ‘Recovering Grace’. Recovering Grace is the website where Bill Gothard was outed as a serial fondler and sexual creep by many of his teenage victims. Curious that this is going up a mere ten days after the lawsuit against Bill’s IBLP Board of Directors. Very Bill Cosby-like.  The ICANN registry is unrevealing, showing only that the site owner purchased it through Tucows in Toronto and that they paid for a Privacy registry service so that no one can know who actually owns the site.  But it is almost certain that Gothard owns the site after comparing it side by side with his own site Bill Gothard.com Linking via Do Not Link – Discovering Grace

We have watched Bill and the ministry for over 40 years, some of us have lived at Headquarters for years, traveled the world with him, spent countless counseling hours with him, including many late night hours, watched him as he interacted with and counseled others, got to field questions from investigators who were sure he was abusing us.  None of us are being paid for what we are doing.  We came to Bill’s defense because we still appreciate all he has done for us, we know who he really is, and knew that most of what was being alleged had to be false.

It’s pretty horrifying in light of the many victims of Gothard that have come forward. Just like Bill’s unfortunate site that he put up mere months after stepping down from the ministry this one is filled with testimonials from women. This is the curious thing about the testimonials at Discovering Grace – they are the same woman sharing the same identical testimonies that Bill Gothard posted at Bill Gothard.Com. 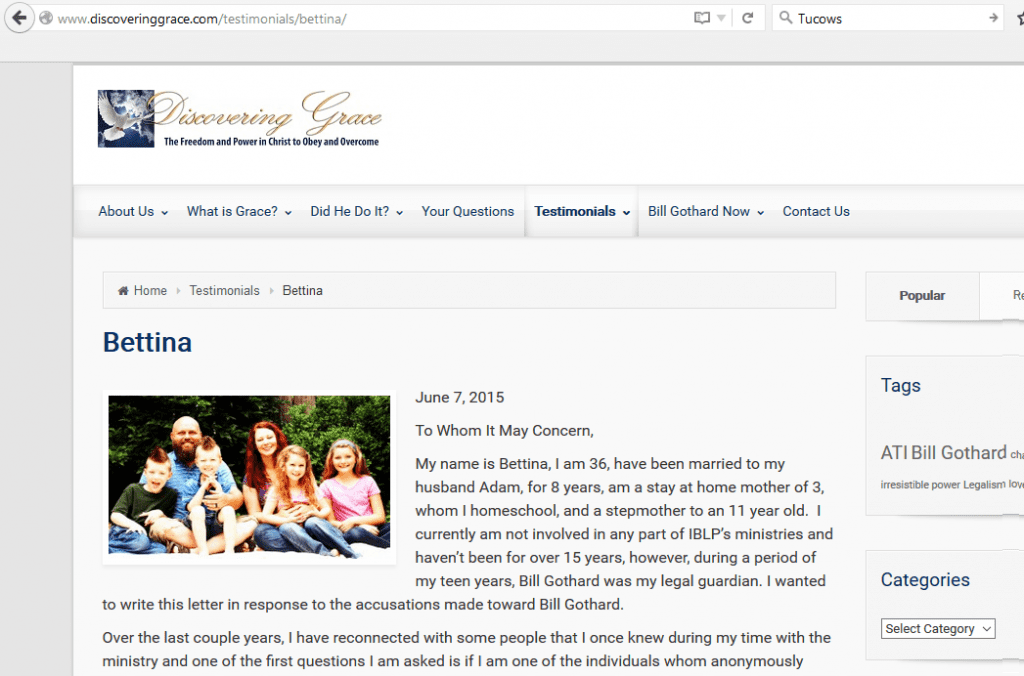 From here it’s looking like another disingenuous trick by Bill Gothard to claim yet again how he didn’t do it. Spiritual Sounding Board said that this new site and Bill’s attempts to pave over his possible transgressions has a lot in common with the Bill Cosby scandal. What do you think? I think Bill’s not fooling anyone. He owns the site and has mounted his own defense while pretending to be random people who love him.

October 30, 2015 Is Biblical Gender Roles a Big Hoax?
Recent Comments
8 Comments | Leave a Comment
"This is late, partly bc of my preoccupation and partly bc I'd been slowly reading ..."
Jennifer Serena’s Serenity – Luxury Hotel, Birthing ..."
"Thank you for your commitment to truth and love, Suzanne. Best wishes to you and ..."
Meredith Anne Not a Goodbye, More of a ..."
"For what it's worth, I've learned a lot from you about a Very Creepy movement ..."
Gwen Pryce Not a Goodbye, More of a ..."
"Unfortunately, this kind of satire (if it even is satire) is what gives Christianity the ..."
Emily Is Biblical Gender Roles a Big ..."
Browse Our Archives
get the latest from
Nonreligious
Sign up for our newsletter
POPULAR AT PATHEOS Nonreligious
1