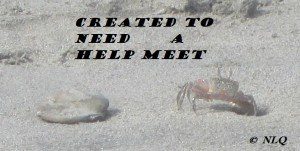 Make Her or Break Her

If a girl has been raised by a bossy mama and a silent Steady father and has not been taught the Word of God concerning her role as a wife, she will not understand or appreciate her Command husband’s great need for respect and reverence. When a wife sees her husband as overly critical or demanding, she is going to have an opinion-and an attitude. Of course, she has a right to an opinion. Only a brainless, broken woman would be without opinion. She might keep quiet but she will flare her nostrils in disdain. When a self-centered Command Man sees his wife “disrespect” his command, he takes it as complete revolt.

Well, we are starting off wonderfully today, aren’t we? I noticed that Michael equates knowing the Word of God concerning her womanly roles with doing what the husband says when he says. I’m fairly certain the Bible did not mean jump when your man says jump. Also, nowhere in this book has there been any talk about Mr C’s EARNING the respect they want. (And frankly, demanding reverence is unhealthy and wrong) It just seems like the argument is: Mr. Command feels he deserves respect. Mrs. Command better give it-or else!

It’s amusing that Michael “allows” women to have an opinion. As long as they don’t share it, or show it in any way, it’s fine. What, then, is the point of an opinion? It is really bugging me how he calls women “brainless and broken”. I would contend that Mr. Command’s way of dealing with his wife would probably lead to brokenness and apparent brainlessness. I mean, if Mr. Command is so sensitive that he feels nostril flaring is a revolt of his “God-given” male authority, then that poor wife is on-guard constantly, to make sure she isn’t screwing up somehow.

I’ve grown up in a house like this, and it’s not called “reverence” or “respect”. It’s flat-out abuse and dysfunction-regardless of how often the abuser calls on his God-given right.

The unwise Command Man gets that much more demanding and self-centered. When the Visionary might holler and openly fight, and the Steady Man will be silent and hurt, the King will withdraw and starve her out emotionally. He communicates the idea that his kingdom can get along with out her. It’s her move. The family either engages in a protracted cold war or the wife who doesn’t believe in divorce breaks and becomes a pitiful shell.

Does Michael call out this unwise Command Man? Verbally humiliate him like he’s done with women, Visionaries, and Steadies? Nope. Honestly, it sounds like he justifies what’s going on. “It’s the wife’s move! She started it, she should finish it!” It is completely unreal to me that Michael compares yelling/fighting, silence/hurting, and starving one’s spouse emotionally, like they are all valid options. Let me be perfectly clear: If, every time your SO does something you disapprove of, you choose to emotionally starve them out, you need therapy.

And yet, it’s the woman’s fault-and her options are either admit she screwed up, and wait until the next “episode”, start a cold war which will probably end in divorce, or not divorce and live as a pitiful shell. The most horrifying thing about this section, is that Michael doesn’t seem to think it’s wrong to do this to one’s wife. Nowhere does he say “This is unhealthy, and unfair to your wife. Don’t do it. This is an abuse of spousal power and will cause her tons of hurt.” He just calls those who do this “unwise”.

Early in marriage most wives will try to bring peace. She slaves, she tries to please you, and then she slowly begins to give up hope of you ever seeing her side of the matter. Many divorces happen at that point. Sometimes it takes 20 years. Some of the ladies that hang in there, suffering a perpetual lack of fulfillment, shrink as human beings, withdrawing into the shadows with their aprons on and a broom in their hands, faithfully doing all that he demands, and keeping the peace. SICKO! You do not want a slave. You want a lover, a friend, and equal partner in life. You need a spirited, opinionated help meet. You want a woman who reflects who and what you are-a leader.

Oh, there we go. Some reproach. Finally. I’m not even going to talk about the first half of this paragraph, because it triggers me so much. Feel free to pick it apart in the comments.

What I don’t understand about this, is the Michael sets up this chapter by saying how Mr. Command is a natural leader, that people automatically flock to and want to serve. A few sections ago, Michael told us that Command Men see all sides-that’s why they’re so great as leaders. But, apparently, all sides doesn’t include the wife’s side.

And while I agree a person with these characteristics is a sicko, Michael telling these Command Men what they should want is laughable. Because he has spent 4 previous sections telling Command Men that they are awesome, and that they don’t take advice from anybody (or apologise). Also, there is no case made why these “unwise” Command Men should even want “spirited and opinionated” helpmeets. It’s probably really the last thing they would want, actually.

This may be just me, but my first thought of someone who “reflects” a leader is a follower. Because isn’t that how you can tell somebody leads-is that somebody else follows? Because 2 leaders doesn’t seem to work out very well.

Michael, please stop with the name calling. There are better ways to make your point.

Some Command Men are so insecure that they do not want anyone knowing them well, so they shut out the one person that is most likely to gain access to their inner sanctum. They cannot rebound from criticism and are totally uncomfortable with a woman that has an opinion. As they shove her into the shadows they grow smaller until one day they are less than what they have made her become. They get no criticism, but they will never earn any praise or admiration either. They learn the art of hypocrisy and try to win the approval of those who do not know them.

I see now! It’s OK for women to be opinionated-as long as they agree with their man. That makes totally more sense. Because, you see, Command Men NEED respect and reverence. They need a sycophant who dotes on them. So, by all means, let her have opinions-as long as they are all “Why, I do believe you are right, dear!”

I don’t understand the rest of this paragraph. I’m having a hard time reconciling the King-type, pushy, bossy, uncompromising man as “getting smaller”. Truly, this makes no sense to me at all. If Michael is trying to explain why treating one’s wife like a human is necessary, he is doing a terrible job of it.

This is a really good point. It unfortunately makes no sense without having a definition of “broken”. Because I’m sure there are lots of Commands that would say “My wife’s not broken-she loves serving me!” or “Broken? No, she’s just tired.” And, for a woman brought up in the culture of “show joyful submission or else you’re rebelling against God”, especially if she was raised with Michael’s child-rearing training-she has no outlet or experience showing (or knowing) her true emotions.

To put that more succinctly-how can a husband tell if his wife is “broken” (and I’m really starting to hate that word-it sounds like a toy that needs replaced), if his wife is not allowed to show her true feelings? Most Mr. C’s (even those that treat their wives like this) would look at their wife and say “Nope. No trouble here.” and move on.

The problem that I’m noticing with the Command Man is that Michael gives few reasons to stop behaving unhealthily, fewer condemnations of unhealthy behaviour, and even fewer examples of proper actions! I was taught that to replace a bad habit, one must pick up a good habit. But Michael seems to think that just saying “Stop it, old boy…things will be better if you don’t do that.” will fix everything.
Michael seems to have no idea that abuse can be anything other than physically hitting one’s wife, or raping one’s children. Emotional and verbal abuse seem to fly under his radar. Oh sure, he’ll admit they’re not good, but he still throws it back on the wife. “If only she’d give him the respect and reverence he needs!” That’s called victim-blaming, Michael.

I was going to keep going in this section, but I’m squicked out. Expect more of the same next time.

December 12, 2015 Quoting Quiverfull: Part 3 - Selfish Momma Dooms Children?
Recent Comments
2 Comments | Leave a Comment
"This is late, partly bc of my preoccupation and partly bc I'd been slowly reading ..."
Jennifer Serena’s Serenity – Luxury Hotel, Birthing ..."
"Thank you for your commitment to truth and love, Suzanne. Best wishes to you and ..."
Meredith Anne Not a Goodbye, More of a ..."
"For your sake, I am so glad you will no longer be editing and managing ..."
Lana Not a Goodbye, More of a ..."
"For what it's worth, I've learned a lot from you about a Very Creepy movement ..."
Griff Pryce Not a Goodbye, More of a ..."
Browse Our Archives
get the latest from
Nonreligious
Sign up for our newsletter
POPULAR AT PATHEOS Nonreligious
1