Patheos Explore the world's faith through different perspectives on religion and spirituality! Patheos has the views of the prevalent religions and spiritualities of the world.
by Cindy Foster cross posted from her blog Finding Fundamental
I was strolling down the aisles at Sam’s Wholesale Club one day about a year or so after leaving the church, and in the book aisle I noticed a book written by a woman from Afghanistan. It was obvious from the cover that she was a Muslim living under Taliban rule.

I picked it up and began looking it over as I do with any book that piques my curiosity. I turned it over to read the back cover and was instantly captivated by what I saw. There written, was a list of rules imposed and strictly enforced on women under Taliban rule. 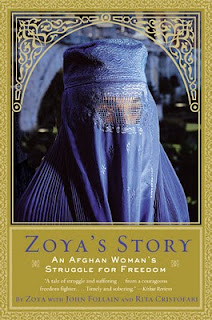 It was Post- 911 and all eyes were on the Muslim world and the religious radicalization that spawns and sustains terrorism, so the firsthand telling of a woman’s experiences living in the Taliban world would capture anyone’s interest.

But my interest was more of one who could in a tiny, suggestive way….identify.

Perplexed somewhat by the thought that I could so readily identify with this woman who suffered such extreme oppression, I pondered the idea of writing as an outlet for my own disillusionment.

Though the pain and betrayal I felt at the bidding of church family and co-laborers can in no way compare to the brutality of the Taliban, I began to recognize the extent religious radicalism could oppress in any culture and how ours is no exception.

History teaches us this.

Still stinging from the rejection and the reality of all I had lost  I was just beginning to accept that life as I knew it was forever changed. I was still trying to filter what I truly believed from what I just “accepted” as truth and was aching–even to feeling I would explode–with the need to purge it all.

Writing about the feelings and the endless debates going on in my head between those dogmatic, preaching voices and the inconsistencies I observed but never allowed to surface, could give me some peace and solace.

So I decided to write.

And I began to explore–to take a treacherous trip backward to investigate what circumstances, what state of need, what frame of mind and heart had lured us to this place.

Both my husband and I were literally born into the Independent Fundamental Baptist belief system of Christianity so the foundation was already laid, but our early history in this group was nowhere near extreme by comparison to other  Christian denominations, though often more conservative.

We gravitated to the extreme gradually as we were influenced by preachers and evangelists of the literal, KJV only persuasion.

There are IFB preachers who I have heard state and even preach that the Old Testament capital punishment sentences should still be imposed to this day on atheists, adulterers, homosexuals, rebellious sons and other offenders of OT death penalty laws!

These sentences include stoning and burning–acts as barbaric as those of the Taliban. So given the sanction of the US judicial system, there are radical sects of Christianity who could rival the Taliban.

The Taliban literally “lops off the heads” of the infidels—the ones who do not embrace their rabid beliefs and those who break their laws. There are Independent Fundamental Baptist churches who, in essence “lops off the spiritual heads” of their tender young by offending them with contaminated doctrines of men.

From what I have been able to find, the term “Taliban” originally was defined as- to seek, or seeker of knowledge, but it has more recently come to mean-a seeker of religious truth. There are extreme religious, cult-like churches in America that similarly “seek religious truth” but though very “religious” are very far from the Truth.

Here is an article I copied from the internet reporting how women are treated under the Taliban and some of the many Taliban rules.

It is important to note how many of these rules apply only to women:

The following list offers only an abbreviated glimpse of the hellish lives Afghan women are forced to lead under the Taliban, and can not begin to reflect the depth of female deprivations and sufferings. Taliban treat women worse than they treat animals. In fact, even as Taliban declare the keeping of caged birds and animals illegal, they imprison Afghan women within the four walls of their own houses. Women have no importance in Taliban eyes unless they are occupied producing children, satisfying male sexual needs or attending to the drudgery of daily housework. Jehadi fundamentalists such as Gulbaddin, Rabbani, Masood, Sayyaf, Khalili, Akbari, Mazari and their co-criminal Dostum have committed the most treacherous and filthy crimes against Afghan women. And as more areas come under Taliban control, even if the number of rapes and murders perpetrated against women falls, Taliban restrictions –comparable to those from the middle ages– will continue to kill the spirit of our people while depriving them of a humane existence. We consider Taliban more treacherous and ignorant than Jehadis. According to our people, “Jehadis were killing us with guns and swords but Taliban are killing us with cotton.”

Taliban restrictions and mistreatment of women include the:

There is only a few degrees separation between the legalistic Baptist and the Taliban.  There is none so blind as ones who will not see.  We must open our eyes…

January 12, 2016 Quoting Quiverfull: Don't Hate Men That Only Like 'Perfect' Women?
Recent Comments
22 Comments | Leave a Comment
Browse Our Archives
get the latest from
Nonreligious
Sign up for our newsletter
POPULAR AT PATHEOS Nonreligious
1