by Suzanne Titkemeyer cross posted from her blog Every Breaking Wave

Editor’s note: Since I knew that Vyckie Garrison was writing a piece for Raw Story about Vaughn Ohlman’s apple parable and she’d be focusing on the patriarchy and dehumanizing aspects of it I thought I’d look at why his analogy is seriously flawed and misinformed. I grow apples as a hobby in my garden and it is not at all like Vaughn likes to think it is. Glorious clean romanticizing of something he knows nothing of. Treating your girls like apples isn’t a good idea..This was also written before it was pointed out to me that the meme was actually created by Von Ohlman’s writing partner Jeff Woodward. No clue who he is other than Vaughn’s partner at the site. He explains his ‘Apple Girl Theory‘ in detail at the site. So to make this accurate it’s Jeff that doesn’t understand apple farming with this simplistic bit.

I’ve been sort of down in the dumps the last few days. It’s not from anything negative going on in my life, things are going well In fact, I finally got a buyer for my father’s large farm in Louisiana. They have ready cash and want to go to settlement in three weeks. So I think it’s hormonal, or maybe I’m fighting off an infection. It’s something physical, not emotionally. Maybe it’s the stress of the house remodel? Who knows? Phases of the moon? Reaction to the meds I’m going to be on for a long time because of the MRSA? Itchiness of my wool sweater combined with the extreme cold?

But that ended this evening when someone sent me a link to a site titled ‘Let Them Marry’. It’s a site by Von Ohlman, the guy NLQ quotes sometimes that has a rather unusual view of a father’s role in his grown adult children’s lives. He even believes in the no courtship model where the fathers pick out the spouses, not the actual people getting married.

Today this really outdid any other ridiculous so not based in fact thing he’s said before. Jesus could do some awesome parables. Vaughn Ohlman, hmmm, not so much.. 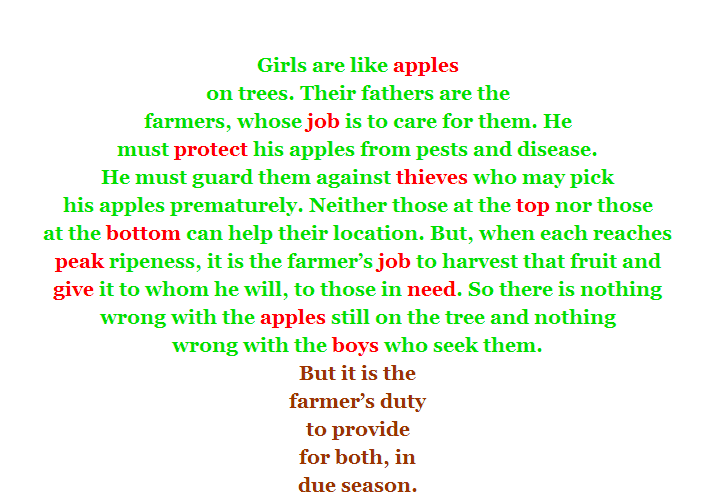 I am laughing here and I was laughing the first time I read through this. It’s pretty obvious that Von doesn’t know thing one about growing apples. Or women.

I’m not an apple farmer, but I happen to have a mini apple orchard in my backyard. I grow them. I pick them. I make jelly and cider. I understand the basics. I also happen to live in one of the parts of the country where apple production is a huge industry, in the Piedmont area of Virginia, not too far from the apple product maker White House Apples. White House of Winchester has employed singer Patsy Cline and her various relatives through the years – a little crazy trivia.

Apples are big big business in this part of the world. Serious business. I’ve known a number of apple farmers in this area, guys that make their living doing what Vaughn is suggesting, just with real apples, not daughters as an apple substitute in his poor illustration of the duties of a father.

Let’s look at his claims of what the farmer does to ‘protect’ those precious apples to get them to market unblemished.

Apple growing is a dirty business on so many levels. In the spring when the tree is blooming you have to spray it with noxious chemicals, or risk worms and fungus. The most careful farmer in the world cannot stop determined birds and squirrels, who are always going to taste more than a few apples. When you pick there are always those apples with bird pecks and squirrel teeth marks on them. That is normal!

The thing that is the absolutely funniest bit that Von is so wrong about involves who touches those ‘apples’, keeping them pure for the farmer to pick. I don’t know a soul in this area that picks their own apples, except for the folks with one or two apple trees in the back yard. In the reality of the farmer a crew of itinerant migrant farm workers arrive, most Mexican or Haitian, and they strip that orchard’s trees of apples by hand. Feeling all those apples for ripeness with their dirty dirty not-the-farmer hands.

When I had my country store in the shadow of the Shenandoah National Park we’d get the apple pickers coming in to buy international money orders to sent home, or to pick up a few supplies. Most of them seemed like decent hard working guys that were just unfortunate and uneducated. This is what they knew how to do. But I know that in the world of fundamentalist Christianity these guys would be considered ‘unsuitable’ to have any interactions with those precious daughter-apples up in the tree.

But those aren’t even the only men that the Von’s of this world wouldn’t let near their daughters that handle those apples from the tree. There are men that go through the bushels from the pickers, sorting and grading, separating out those that go for the cider press or vinegar making, from those that would end up at the local market sold fresh.  Even in produce there is judging and categorizing, class ism even.

Another step the apples all go through is a good washing. You would be surprised by the dirt that comes off the apples, all the bird shit, pollution, good old fashioned dirt, soot from nearby wood burning stoves.  After that the best ones are waxed and polished, subjected to even more chemicals before being packed.

Then the apples get packed, some going to be processed, some being wrapped in paper to be packed in a box for market while others get packed away into cold storage. That’s a lot of different strange men touching all those innocent apples. Sort of a apple hand gang bang by the standards of Von. The farmer doesn’t touch them, much less pick them. All those people that Evangelicals frown upon from other countries do.

Apples are a delicate thing too. You have to hand pick them to keep them from bruising. Not everyone can do it well. My poor husband found that out the hard way this summer while helping me pick our mini orchard so I could make jelly, pie filling, applesauce and a plethora of other preserved apple goodies. You just cannot have any fumbling idiot grasping and groping them.

Jim also learned that not every apple is as good as it looks, that sometimes an apple can be gorgeous rosy red and you can slice into only to find a rotten core. Reminds me of a lot of public loudly-braying Evangelical Christians I know, all shiny on the outside but nasty inside.

Von also seems to think that if you are vigilant enough not only can you avoid pests, molesters, birds, bird crap and apple thieves and all his steps will ensure a bumper crop of perfect apples. Oh no, sometimes apples are at the mercy of the weather. An ‘act of God’ per se. Let it snow or freeze during the blooming and you will lose most if not all of your future apple crop. It’s a critical time. Also some of the intense storms that came crop up over the Blue Ridge and be down in your orchard with hurricane force winds in late summer just before the apples are ripe can rip through an orchard, scattering the ground beneath the trees with almost ripe apples, useless for market. It’s not the apples fault and there’s not a damn thing the farmer could have done to prevent the apple slaughter.

Mostly I know that his illustration of girl-apples would judge those that naturally fall from ripeness before and during the picking as worthless. Which they are not. The fallen apples make the best apple cider and apple juice if you’re careful not to use the ones starting to rot.

But here’s the thing, the main point of all this apple discussion. People aren’t apples. They are not consumable objects, or a ‘crop’. By reducing unmarried girls to apples Von is doing the same thing that the guys that produce and use pornography do, dehumanizing the women to use them.

Again, women are not apples! Not even close.

Suzanne Titkemeyer is the admin at No Longer Quivering. She’s been out of the Quiverfull Evangelical world for nine years now and lives in the beautiful Piedmont section of Virginia with her retired husband and assorted creatures. She blogs at Every Breaking Wave

February 16, 2016 More on the Creepy Apple Analogy
Recent Comments
20 Comments | Leave a Comment
Browse Our Archives
get the latest from
Nonreligious
Sign up for our newsletter
POPULAR AT PATHEOS Nonreligious
1