A few weeks ago, Dwayne Walker graciously allowed me to post his views on what he calls the “survivor wars” among those who protest the abuses of the Independent Fundamental Baptists. Sadly, I see the same kind of vying for the alpha survivor status among many bloggers who write about spiritual abuse within the Patriarchy/Homeschooling/Quiverfull Movement. (Dwayne addresses the conflicts among former Independent Fundamental Baptists, abbreviated IFB.)
Dwayne writes:
What is a ‘Survivor War’?  First, it has nothing to do with the television show, Survivor.  When I write ‘Survivor War’, I am speaking about the skirmishes that happen between adult survivors of child abuse within fundamentalist churches or IFB children’s homes which manifest themselves through internet flame wars, banning someone from a message board either because of bad behavior or the poster mentions something that flies in the face of the current orthodoxy of the board.  If we’re talking about Facebook, then we’re dealing with ‘unfriending’ or ‘blocking’ because of either rudeness or the moderator does not want the competition.
Though everyone has their bad days, I believe that many people end up falling into the trap of the survivor wars, becoming much like Tommy in The Who’s rock opera. I fear that some jump into taking action against the problem before they’ve managed their own problems related to their own spiritual abuse experience. We learn and heal as we move forward in a healthy way when we engage in social action against injustice, as research has shown that women who get involved with social action after recovery from their own rape experience tend to have the most successful healing.
However, I believe that many people move forward into these social activism activities prematurely without exit counseling and education about how cults and high demand systems operate. They rely on the the only dynamics they know – the bad dynamics used by their former group – to bring about idealistic change. Basically many go on to demonstrate that “hurt people hurt people” until they learn a better way of coping. 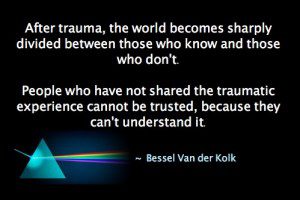 Not One Of Us!
We’ve already looked into the trap of “If you don’t limp…” which excludes people who haven’t shared the same kind of trauma. Unfortunately, this happens among people who survive high demand groups. While there is nothing quite as healing as commiserating and empathizing with others who share specific experiences, with many who suffer from PTSD, it becomes a cause for exclusion, just as is seen in biker gang rivalry. I believe that it accounts for the rivalry depicted in Monty Python’s Four Yorkshireman sketch.
Many of these “survivor wars” involve factions between survivors that have so many factors in common with one another, but they cannot connect with each other. It’s as if they do become so tribal about having it worse than the other guy – as if it’s a competition to see who had a worse experience. There’s also an element of the idea that “They really didn’t break me like they did the others” at work, because it is a most unpleasant and threatening realization. They were somehow smarter and better than the other guys who “just don’t get it.”
I’ve also witnessed the same kind of rivalry among the survivors of other non-Bible based cultic groups who seem to fear that one survivor group and effort might outdo their own efforts – even though they share the same cause and experience.
Locus of Control in the Trauma Trap
A good deal of the rivalry and conflict seen in the survivor wars owes to the fact that those who aren’t working on their own recovery still draw their sense of personal worth from the validation and laud that they derive from others. They couldn’t or weren’t willing to continue to win the affection of their group’s leadership, but if they leave and don’t work on those core issues of worth which cultic groups erode and destroy, they continue to look for that validation elsewhere. They look to the community of their fellow survivors to give it to them. And so the survivor wars are born.
Rather than affirming, connecting, and working with other survivors, too many end up stuck in the sense of rivalry as if there is only a finite amount of affirmation and warm fuzzies to go around. If someone else gets attention for some good work or writes the first post about the latest crisis in their former group, somehow, it seems that their own contributions and efforts lose value and impact. Dwayne notes also notes owning the discussion (“I was there first!”) as a theme. 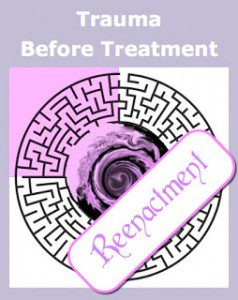 Activism as Trauma Reenactment
And so we have an example of yet another trauma trap that can keep people from moving forward into healing from trauma. Activism addressing the abuse suffered becomes a distraction for many people, For too many, I fear that it becomes yet another compulsion to reenact their original trauma.
It is not that people who engage in blogging or social change efforts do no good, but without help moving into healthy recovery by grieving and healing on a personal level, it becomes a compulsion giving way to the same outcomes that the original group fostered. Activism can create an illusion that growth and healthy progress takes place because it does address the larger problem in a more general sense. But without attending to personal healing that illusion only serves to intensify and perpetuate the rhythm of the original trauma.
Sadly, the collateral damage of the survivor wars results in more abuse, as the movie Tommy depicts and as Dwayne Walker explains so well for us. It’s truly sad, for the wounded end up revictimized in the process of reaching out to find healing. And too often, both survivor activist and aspiring survivor end up stuck in Tommy’s trauma trap.
Hope in Healing
But there is a better way and a better path to healing. That’s hard to comprehend for those who resist finding help and counsel after spiritual abuse, as there is much busy distraction that can be found in that trauma trap before treatment. Trauma makes us inflexible and stressed and pulled to our limits. We must rally our own strength to be patient with ourselves, so there is less energy left over to offer patience and understanding to others. But hang on. There is hope and healing ahead for those who choose to get out of the trap.
I’ll leave you with the advice Dwayne offers to help overcome the survivor battle:
I could give explicit examples of various ‘Tommys’ (or Tommies? Grammar nazis, please advise) in our midst, but really the problem is with us.
[. . .]
If you keep that in perspective, you realize it’s just individuals. Imperfect individuals and our desire to see them as anything but imperfect individuals sets us up for betrayal. Now, chill out and start learning from those who came before you!
For further reading until the next post:
And here are the original and a more modern version of
Monty Python’s Yorkshireman sketch,
in the event that you’ve never seen it before.
THE SECOND ONE COMES WITH A LANGUAGE ALERT!
From the film ‘Monty Python at the Hollywood Bowl’
From the Comedy Master Class
Editor’s note: If you’ve not had a chance to see the movie ‘Tommy’ the entire theme is one of a child’s trauma being played out in the family. Once Tommy is supposedly healed of his trauma he keeps reenacting it until the final bit where he does break free. Here’s a clip of the ending. Great film~
~~~~~~~~~~
Cindy is a member of the Spiritual Abuse Survivor Blogs Network.

March 7, 2016 Quoting Quiverfull: Giving Gifts Dulls Appreciation For 'Everlasting Gifts'?
Recent Comments
1 Comment | Leave a Comment
Browse Our Archives
get the latest from
No Longer Quivering
Sign up for our newsletter
POPULAR AT PATHEOS Nonreligious
1

Businesses run by a UK cult get a...
PROMOTIONAL YouTube videos created by the Exclusive Brethren – a wealthy subset...
view all Nonreligious blogs
What Are Your Thoughts?leave a comment
Copyright 2008-2020, Patheos. All rights reserved.