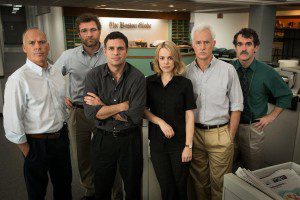 Editor’s note: The film ‘Spotlight’ is now out on DVD and Pay Per View. It involves spiritual abuse and is a great watch for anyone who has dealt with the issues of spiritual abuse. Both Cindy Kunsman and myself have written reviews of this excellent film. I personally love the film’s tag line ‘Break the story. Break the silence’

There is a scene in the film Spotlight where Mark Ruffalo’s character discovers incontrovertible proof that the head of the Catholic church in Boston not only knew about the child sexual abuse scandal in the church, but was complicit in its cover-up. He urges immediate publication of the story, and ends up storming out of the office when his editor (played by Michael Keaton) refuses, choosing to wait until they can expose the entire, corrupt system rather than target a single man.

After some self-reflection, Ruffalo confesses to a fellow journalist that his anger and frustration at his editor was driven largely by the loss of an unacknowledged hope he’s carried for years. Having been brought up in the church and subsequently walked away, Ruffalo shares that he’d always assumed that one day he’d be able to return – go back to the familiar ritual and comfort of his childhood.

But he’s had to face the harsh reality that this he’s swallowed the red pill and there’s no going back. The institution which has symbolised for him the security of his childhood has demonstrated just how ready it is to sacrifice innocent children in its determination to retain power. He’s found proof of a system which cares little about the devastation it has inflicted on the wounded and vulnerable, and, as William Wilberforce said, “[he] can never say again that [he] did not know”.

I’ve been thinking about that scene all day (I watched the film last night). It caught my attention because I know what it’s like to wake up and realise you can never ‘unknow’ what you’ve discovered. That the institution you once believed was safe and friendly is actually incredibly toxic and will lash out at you if you start to question it. That the people you thought would love and care for you no matter what, willingly turn on you when you no longer support their agenda. That too many religious leaders would rather leave you bloodied by the side of the road than get involved.

The truth, when it hits you, is both shocking and painful. And there is a price to pay for that truth.

But, just as the Boston Globe journalists discovered, when you let the truth out, and you hear the sheer relief in the voices of other victims as they learn they are not alone, you know you couldn’t have done anything else.

May 24, 2016
Quoting Quiverfull: Your Mothering Effects Eternity!?
Next Post