What are you Doing? Chapter 8 Part 3 – Sakal Still Just Wants to be Right 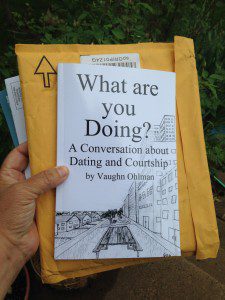 Preparing to read the rest of this chapter again makes me feel like I need to run away to a place of lollipops, lemon drop martinis and lagoons, peaceful and calm. There’s nothing more disturbing than a ‘Good Christian Patriarch’ that thinks he’s the only one who is right. Except maybe that ongoing televised goat rodeo that is the Republican National Convention. I think Vaughn Ohlman and Donald Trump might have some crazy ideas in common.

So where were we last week? Back at the park with youth pastor Charles Williamson and pontificating know it all blabber mouth Sakal Davidson arguing the definition of courtship versus dating.

Thankfully we are finishing up this chapter. The bad news is that chapter 9 is a continuation of the same themes with the same verbal combatants at the same Picnic Table of Confession.

We start with the ‘giving away pieces of your heart’ trope and pre-licked candy bar.

How can she avoid it? How can she possibly look at a young man and say, ‘I wonder if I might want to marry him,’ without having part of her heart, at least, sigh and say ‘yes’ and begin forming an attachment?

As for the young man, well, I don’t want to be crude, but what insanity is it to tell a young man, ‘I want you to consider whether this young woman would make a good wife, but I don’t, ever, want you to think about her being a wife, in the physical sense. I want you only to consider her sterling spiritual qualities and never her marvelous physical form’?

Avoidance of sex, thinking about sex, saying the actual word ‘sex’ while pearl clutching about ‘soul attachments’ because you might consider the deliciously intriguing curl of his or her lips or contemplate what holding their hand might be like is one of the hallmarks of the most dangerous types of Christian Fundamentalism. People are hardwired by biology to do just that. It’s natural and as long as you are not obsessing or acting on those momentary impulses there’s no ‘sin’. No one is harmed, defrauded or defiled by these things.

But really, everything that happens or is said in Fundytown always, always, ALWAYS boils down to sex. Without mentioning the word for sex.

All of this is followed by discussions of the rape of Dinah, King David’s lust and love, Amnon raping his sister and Samson lusting over a Philistine girl.

What Sakal and stupid weak Charles miss about all of these stories is that in each one none of the women did anything on purpose to attract the men involved, they didn’t give the men permission to rape them. They were in no way responsible for what happened to them that left them according to Von-logic ‘Pre-licked candy bars’. Very toxic tales from a Bronze age book that has little bearing on modern day life.

SD: So, all of the examples we have from Scripture of pre-marital relationships are negative. They demonstrate the importance of being bound in covenant before thinking of someone as your wife or husband, or having any kind of romantic involvement.

Whoa! There was not one hint of ‘romance’ anywhere in those Bible stories. They were mostly a pile of hostile against the lady’s will straight up rapes! Crimes against the women involved. It’s quite doubtful that any man raping a woman is thinking about her being his wife while he’s committing the act of violence, control and power.

Rape is not about sex or romance ever! Statistics prove this out time and again.

Charles tells Sakal that he’s landed on a harsh and wrong conclusion, that courtship is the only way. But Sakal comes back with another pile of toxic ideas. Mostly Charles functions in this chapter only as a foil for Sakal to shout out his ideas.

SD: No, courtship is all about being ‘patient’. It replaces difficult obedience with frustrated patience.

Sakal seems to be completely unable to understand that in real life outside of the Christian high demand cultish groups that practicing restraint, not molesting others, not raping, not breaking the laws isn’t that difficult. Most folks manage to behave without the threat of a vengeful angry deity threatening to burn them for eternity in a lake of fire hanging over their heads. They behave in a way to benefits society because they see the value in not being a selfish prick.

He returns to the same point once again about how fathers should be arranging marriages very young for their children.

SD: Well then, that is what I mean by ‘obedience’. We are clearly commanded not to ‘wait’ on marriages, but to act toward them: to take wives for our sons, give our daughters in marriage; and to ‘let them marry’. Instead we ‘wait upon the Lord’ in clear disobedience to His commands!

Next week we’ll delve into chapter 9, which looks like a repetition and continuation of Sakal scripturally schooling the youth pastor.

Ugh, now I’m queasy. Time for ginger ale and laying down to recovery from this horror.

Join me this Sunday night for a Facebook Live reading of the remaining bits of this chapter. We start at 7 pm est.