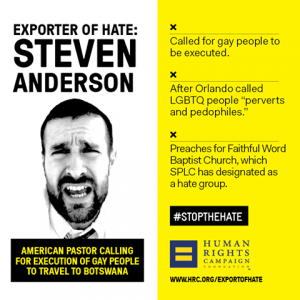 Steven Anderson went ahead with his plan to visit Botswana on a ‘Soul Winning’ trip and the main thing that happened is that he physically assaulted a Botswanian man by the name of Tony Benn, all the while ranting and accusing him of being ‘gay’, which he was not. Anderson apparently kept shouting that the man had an ‘AIDS filled mouth’.

A warrant was issued for his arrest and he was picked up by police according to Reuters:

Khama told Reuters he had ordered Anderson’s immediate arrest and deportation after the pastor said in an interview with a local radio station in the capital Gabarone on Tuesday morning that gays and lesbians should be killed.

“He was picked up at the radio station. I said they should pick him up and show him out of the country,” Khama said in an interview. “We don’t want hate speech in this country. Let him do it in his own country.”

Anderson himself is claiming that he was not arrested and left under his own power, not at the government behest. Does he know that lying is a sin?

“I am not being arrested. I am leaving Botswana voluntarily,” he told witnesses at the radio station, adding in the local Setswana language that he loved Botswana very much.

As a result of his shenanigans the government of Botswana has declared him a ‘prohibited immigrant’ and they have deported him as of yesterday. Will be interesting to see how Anderson tries to spin this from the pulpit and in his blog. The older man he attacked had this to say to the media:

“People should be careful because of his temper. I think he needs mental health counseling and help,” he continued. “Perhaps it’s the stress of constant media intrusion into his life and always being on the stage.”

More as this story develops! Sadly enough the USA has to take him back.

September 21, 2016 Quoting Quiverfull: Dress Yourself Out of Depression?
Recent Comments
20 Comments | Leave a Comment
Browse Our Archives
get the latest from
No Longer Quivering
Sign up for our newsletter
POPULAR AT PATHEOS Nonreligious
1 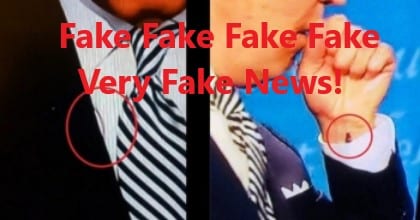