Should There Be Public Forgiveness For Josh Duggar?

Should There Be Public Forgiveness For Josh Duggar? September 28, 2016 Suzanne Titkemeyer 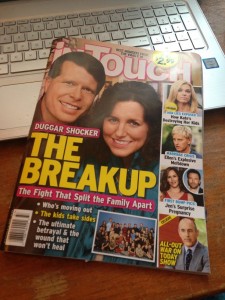 Over the past couple of weeks there’s been some happenings on Duggar social media with a slant towards redeeming the public image of Josh Duggar after last year’s revelations of his various sins. This culminated with this week’s posting on the official Duggar social media celebrating the 8th wedding anniversary of Josh and his poor beleaguered wife Anna. This is what the Duggars said about Josh and Anna:

“Throughout this ordeal, Anna remained faithful to her husband. While she publicly shared the deep grief and betrayal that she felt, she never once talked badly about Josh. She continued to trust in God and be strong for her children, and she waited patiently for her husband to complete his program and return home.”

Speculation is that Jim Bob and Michelle Duggar are attempting to rehab Josh’s public image with an eye towards allowing him back on the television show, even as TLC has publicly stated they are not open to ever allowing Josh back on the Duggar television show.

This is all coming on the heels of speculation that Anna was being abused. A few weeks ago a photo circulated around the internet of Anna Duggar out shopping with Jill Dillard and Jinger Duggar that looks like Anna is sporting a darkened eye and a split lip. The photo is here and clearly something has happened to Anna even if there’s likely to be a rational explanation for the injuries.

Life and Style magazine has an article on how most of the Duggar children are currently rebelling against continuing on their television show “Counting On” and are demanding to be allowed to leave the program. The only one said to be continuing on will be Jessa and Ben Seewald. One of the people seeking to flee the show is Anna Duggar. Here’s what they had to say:

Anna has gone into hiding, even avoiding attending church, to escape the persistent backlash.

“Josh is selling cars, but they’re not doing too well financially, ” says an insider. Emotionally, things haven’t been much better. “Anna and Josh are still in counseling together, and he seems to be the same old jerk that he’s always been.”

While all these things are going on in Tontitown there are those in the Evangelical Quiverfull world that are buying the spin and promoting the idea that Anna forgiving Josh is the only right thing to do, like Quiverfull female cultural enforcer Lori Alexander. She had this to say about Josh and Anna:

The world can’t understand this type of love and forgiveness. They consistently ridicule the Duggar family’s values and of course they do. The Duggar family lives for the Lord and His glory, not the world’s. Yes, Josh committed terrible sins against his wife but she was determined to show him the grace and forgiveness the Lord shows us.

The stakes are high, women. Eternity in hell is a long, long, time. Men who are caught in Satan’s web are blessed who have godly wives who are broken up inside from the rejection and suffering they are going through but continue to stand strong in the Lord like Anna. In the Lord’s strength, they are being Jesus to their disobedient husbands and showing love, warmth, and joy to them. It’s amazing to read their testimonies when their husbands come home and want healing for their marriage. Some begin going to church and loving the Jesus they see in their wives.

Normally you might think that none of this is anyone else business but the Duggars, that’s the rallying cry we hear here at NLQ from Duggar supporters, that it’s only the Duggars business. The problem with that is that the Duggars themselves have made it the entire world’s business by shoving it in everyone’s faces on social media and the like.

So what do you think about Jim Bob and Michelle’s latest attempt to promote public forgiveness of Josh?

September 28, 2016
Cognitive Biases: Part 1 - Falling Off the Ladder of Inference
Next Post