It’s Not That Complicated: Part 1 Chapter 11 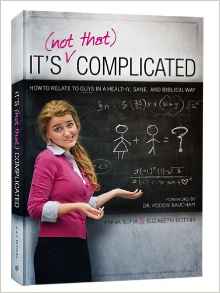 All quotes from the book are in blue.

Ahh.  Now we launch into all the fun of reading about how Anna Sofia and Elizabeth have judging all their  friends failed (or not so failed) relationships.

I’m sure I’m going to say this a lot, but I find it crass that two young women who have had a grand total of a single rumored courtship between the two of them expect us to listen to them about how to have a healthy relationship with men.

Actually, I’m being overly optimistic.  We’re going to hear about how all of their “friends” have shitty relationships.

Bluntly, I learned most of what I know about relationships from listening to adults discuss the positives and negatives of ongoing relationships going on around them.  I also watched the adults around me to see how people treated each other and which relationships I wanted to emulate some day.

“Ashley, 24, has known since she was 17 the Bradley was The One. All these years she’s clung to every possible reason to hope, cherishes every friendly gesture… and now she’s really from his announcement that he’s just become engaged to one of her friends… (pg. 191)”

Poor Ashley is still racking her brain to figure out what exactly just happened. All the evidence was pointing to Bradley’s intention to marry her: the time he walked her to her car when he saw her out shopping by herself, the time he gave her a book for her birthday, the special way he always smiled when greeting her, the fact that their families have been such close friends for so long, and the fact people often hinted what a cute couple they’d be. How could her deduction has been wrong? How had her little grey cells led her astray?” (pg. 193)

Let’s retrace this trail of purely circumstantial evidence. First of all, Bradley had a reputation for doing chivalrous thing like opening doors for every girl – the fact that he walked her to her car but nothing beyond the fact that he was a thoughtful fellow. Second, it was only natural for his family to give her a birthday present, since they were at her party – the fact he carried it into the house and put it into her hands revealed nothing beyond his habit of carrying things. Third, smiling was Bradley’s modus operandi whenever he saw another person and  meant only that he was a friendly person. Fourth, fact that the families have both known each other forever was not a sign from Heaven of a match made in, um, heaven.  Fifthly,  gossip and conjecture or more often a red herring than an indication of God’s future plans. (pg. 193)

Deanna is 20, and think that Gabe is amazing – though she knows she should control her emotions, it’s getting really hard the more she realizes he likes her. The cozy feeling of being liked is intoxicating, and so are their flirtatious repartees.  It has crossed her mind that these romantically charged interactions might be out-of-bounds, but they might also be a good way for the two to try each other out. But the thrill of being ” in a relationship”  without commitment starts to lose some of that sparkle when Deanna realizes that Gabe is sharing the exact same kind of give and take with  Esther…(pg. 191)

These are classic “It’s Complicateds”  because  they’re not defined at any point, and no one, including the involved parties, knows exactly where they’re going. Let’s use Deanna and Gabe for an example. How did Deanna get herself so entangled with Gabe?  Answer: deliberate romantic encounters and emotional fire-stoking. The reality is, our hearts crave to be in a relationship, starting long before we’re ready to get married. Deanna was enjoying her romantic fix and the warm fuzzies of the love with no strings attached. It wasn’t until she became dependent on Gabe’s interest that she realized that this kind of romantic free-for-all meant that there would be no strings attached to Gabe either. And because Gabe was only in it for a good time, he was free to move on once the relationship wasn’t meeting his needs and a better time appeared on the horizon. (pg 195)

Guess what’s next?  If you guessed “The EVILS of the INTERWEBS!”, give yourself some bonus Botkin points!

October 25, 2016 Quoting Quiverfull: Have Babies Right Away!?
Recent Comments
9 Comments | Leave a Comment
Browse Our Archives
get the latest from
Nonreligious
Sign up for our newsletter
POPULAR AT PATHEOS Nonreligious
1