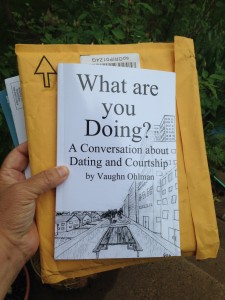 ETA: Tonight’s Facebook Live reading of Vaughn Ohlman’s “What are you Doing” and grand jazz funeral burying it is being postponed until next Sunday night at 7 pm, est. Too sick to read or drink tequila. Sorry about that!

Just like a lengthy bout of the stomach flu we’ve finally reached the nauseating end of Vaughn Ohlman’s book on betrothal, thinking about sexy times with young firm breasts and lots of bad ideas.

Never have I been so happy to finish a book since I left school many years before! Even being forced to read about Miss Haversham and Pip in ‘Great Expectations’ wasn’t this bad.

Last week we covered how the town IFB pastor George Wakefield thinks Sakal and pals are mentally deranged because of the foolish capering of Andrew Adamson and his pseudo-wife Maydyn in that silly park. George says all the things any rational human being who realizes just how sick and toxic this theology is might say.

Chapter 19 is the follow up named ‘Interlude’. Going from the scene in Perv Park to some medieval kingdom it feels like jumping from doing the Twist to the Minuet. Mental gyrations instead of physical though. Lots of poetic fantasizing about gardens, knights, castles and seeking out a wife for some young man. It’s filled with flowery language and condenses the entire crux of this book to a mere two pages. As much as it pains me to say it, if the author had stuck to this medieval courtly behavior style of writing and done the entire book as a prince seeking a bride it would have been much, MUCH better for everyone instead of his stilted script stuck on repeat. He might have sold many more copies and gained fans.

Chapter 20 is even shorter, a half page perhaps, and is a conversation between buttinski Sakal and his wife Isha. It is titled ‘A Welcome Phone Call’ Guess what they are discussing? Maydyn and Andrew’s honeymoon. You can count on Vaughn Ohlman being inappropriately sexually creepy right down to the very last page of his book.

SD: She called you, from her honeymoon?!

ID: It wasn’t a long call, just a quick thanks. She said Andrew had stepped out to get them some food and told her to rest.

Eww, just eww. The implication being that they could not stop banging long enough to sleep or rest. Also, it’s way too far-fetched to think that someone is going to call a lady they met exactly twice from their honeymoon to brag on the marathon sex.

ID: She admitted that he seemed to be enjoying their honeymoon, and that they were spending an amazingly little amount of time outside.

SD: Good! Perhaps her father will get his grandchild soon!

More squishy wrong disgusting fantasizing about teenagers having sex! Von is nothing if not consistent in his focus.

What did we learn from this adventure in bad writing and self publishing?

Join me on Facebook Live Video on Sunday night at 7 pm est. I’ll be doing an epic funeral for this book and doing live reading from the last few chapters on No Longer Quivering’s Facebook page. I will be drinking copious amounts of tequila while giving ‘What are you Doing’ a proper send off. See you then!

Next week we start reading Lori Alexander’s marriage book ‘The Transformed Wife’ One of the note-worthy and cringe-inducing themes in Lori’s book is that she spreads blame around to just about everyone in her life.

October 28, 2016
Quoting Quiverfull: Men Quit Your Job To Be Home?
Next Post