The Suspects – Is Justice Delayed Justice At All For Carol Ann Cole?

Last week we looked at the rules and reality of trouble teen home New Bethany Home for Girls in Arcadia, Louisiana. A place where Carol Ann might have been that possibly figures into her murder. Today I was going to talk about the cruelty and abuse handed down at New Bethany by IFB pastor Mack Ford. But several things have popped up on Facebook groups involving finding Carol Ann’s murderer that we must talk about.

Initially I was going to delay discussing the suspects until the very end, but I think in light of the Facebook postings we need to address the list of suspects now. 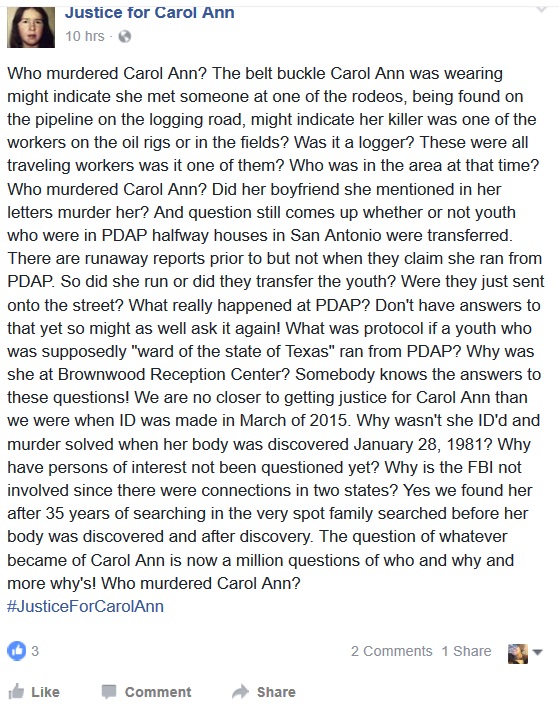 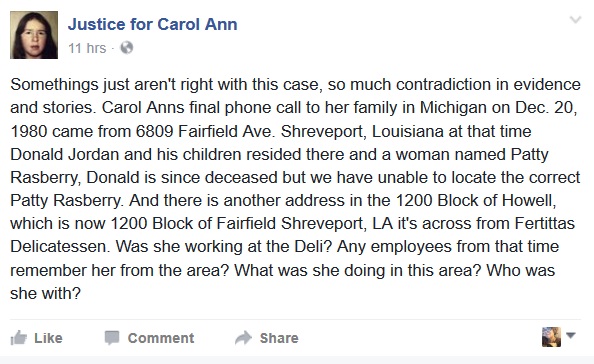 Those are all good questions, questions that someone out there might be able to answer. The truly heart breaking part of all of this is that this is her sister Jeanie Phelps asking the right questions. It is not law enforcement that is asking and seeking answers. They have been largely silent on the status of the case beyond naming John Chesson as a person of interest. Jeanie needs closure.

So who all is on the possible suspect list or have been investigated as a suspect?

This is a long list of possibilities and the reality is that after 35 years, many dead or unknown possible killers and no concrete leads it’s unlikely to ever be solved unless someone who knows something comes forward now. I leave you with a plea from the Facebook page by Carol Ann’s sister Jeanie Phelps. 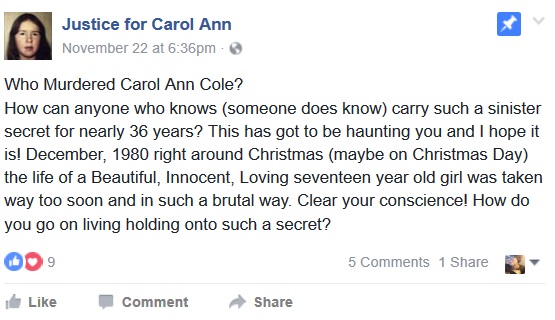 Not going to post a topic for next week because the moment I do that something else that needs to be examined pops up on my radar. But I will try to get to an examination of Mack Ford and the photographs that seem to indicate that Carol Ann was a resident of New Bethany Home for Girls, even if just briefly.

November 29, 2016
Quoting Quiverfull: If He Cheats Immediately Forgive?
Next Post