Breaking Up With God

Today’s guest post comes from Wendi Wheeler, a Creative Associate at Augsburg College, where I went for my undergraduate degree. Wendi and I met last winter when she contacted me to do a story on my work for the Augsburg Now magazine. We’ve since stayed in touch, and the other day she sent me this blog post, written for her personal blog. I’m flattered by her kind words, but the real reason I’m sharing this here (with her permission) is because I think she’s got some very valuable insights on living a meaningful life without religion, and what the transition from religious to nonreligious is like for some. I’m extremely grateful for her honesty, openness, and bravery to share this with the world.

Years ago I went out with a guy who identified as an atheist. He was a student at Concordia College in Moorhead, a Lutheran school for crying out loud, and he didn’t believe in God. I think he was a philosophy major. Go figure. When he told me he was an atheist, I expected him to also say he worshipped Satan and ate babies and stole communion wafers so that he could defile them.

I remember asking him how he knew the difference between right and wrong if he had no moral compass in the form of a God–and that God’s laws and teachings–to guide him. I remember him standing in front of the mirror, jumping up and down in order to get his tucked-into-khakis pink button down shirt to hang right, saying he used his own beliefs and ideas. I thought that was bullshit. How could that possibly work? If left to our own devices, I believed, we would all be horrible, nasty, sinful people.

We didn’t date very long. He was incredibly vain, and he would only let me have ONE Tic-Tac. Who gives a person only one Tic-Tac? The answer, I thought for a long time, is atheists. Atheists were mean in my book.

Then this winter I got connected to the work of Chris Stedman, a graduate of my school who studied religion as an undergrad, got his master’s degree in religion, and now is a big voice in the interfaith movement. Chris identifies as a secular humanist, and for the record, he doesn’t believe in God. What he does believe is that we, as people with common needs and desires and struggles and triumphs, need to work together to make our world a better place. I’m paraphrasing. You can read more about him on his website, or you can Google him. You’ll find lots of interesting stuff.

I met Chris and interviewed him for a story I wrote, and I’ve sort of fallen in love with him since then. Not in a weird “I want to date him” kind of way, but in an “I want to know more about this stuff” kind of way. I was so impressed by him and intrigued by what he writes and the people he knows and reads.

I think I am breaking up with God, and I feel like a pariah.

I am going to read Sarah Sentilles’ book, Breaking Up with God: A Love Story, soon. My friend, who is studying to be a Lutheran pastor, is loaning it to me. Sentilles wrote that breaking up with God “…was like a divorce when all the friends you had as a couple are forced to choose sides and end up not choosing yours.”

Word, Sarah. I feel you.

This is what she wrote for the Huffington Post in June of this year:

“When you break up with someone, it doesn’t mean that person ceases to exist. You bump into each other around town. You see your love with other people, and it makes you jealous, makes you consider getting back together, makes you wonder if you made a mistake when you called it quits. That’s what makes breaking up so hard. The version of God I used to love is still out there in the world, hanging around in churches, showing up in people’s prayers and hearts and imaginations, playing important roles in the stories we like to tell, saving some and condemning others. But I know he’s not the right God for me. I try to remember that.”

I will still be compassionate toward others and help those in need and listen when someone needs to talk and give money to beggars on the street and volunteer with local organizations and bring homemade cake to work. I am pretty sure I don’t believe in God anymore, but I do still believe in good. 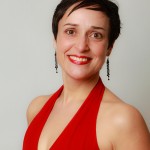 Wendi Wheeler is a writer, a runner, and a creator of pretty dresses for girls of all ages. She is the “Creative Associate – Editorial” (a 12-syllable way to say “I write”) in the marketing department of a Minneapolis college. She also keeps a blog, Living in Love, which started out as a way to share her ridiculous dating escapades and morphed into stories about being in love with herself, with others, and with the world. She completed her first marathon a week before she turned 40 and currently is training for her second while also coaching runners. And when she is not writing or running, she spends time in her studio crafting beautiful clothes and chasing her cat, Melvin, off the sewing table.