HUNGERally: From Rooibos to Reality

Today’s guest post comes from Abigail Clauhs, a sophomore at Boston University who is studying religion and who runs the Boston University Interfaith Council. Below, she shares her experiences working to plan HUNGERally (more info here, here and here).

There is something nerve-wracking about meeting someone for the first time in a coffee shop. You get there first, five minutes before the agreed-upon time by virtue of your unbreakable habit of punctuality. You stand by the door, pull out your phone to look busy. Eyeing the menu, you wonder if you should go ahead and order the rooibos latte or if it would be rude to already get a drink. With every person that walks in, you wonder if it is the one you’ve only spoken to on the phone or via email. There is the awkward eye contact dance where you look to see if that person is looking for someone, too, and if you both are–relieved smiles and, finally, introductions.

I did that a lot last semester. Networking meetings, not blind dates. Just beginning my work with the Boston University Interfaith Council, I wanted to meet the leaders of interfaith programs at other colleges in Boston. And so, through a series of emails and calls, I got to know the interiors of a myriad of Boston coffee shops and people from MIT, Suffolk, and other universities.

The first time I met Chris Stedman was in a Starbucks in November of 2011. Chris, the Interfaith and Community Service Fellow for the Humanist Chaplaincy at Harvard University, was a major interfaith activist, and I was a little starstruck. However, we found ourselves soon fervently talking about interfaith work and the importance of service. That, in a way, was where the idea of HUNGERally was born. Of course, we has many meetings after that–and even more conference calls–but the event that happened on February 11, 2012, began right there.

Matthew Martin from Kids Care/Outreach Inc. affected many students with the staggering numbers of hunger and the news that every dollar you spend is enough to feed four hungry children or adults with a meal from his organization. We also heard about the many types of people who go hungry–from the homeless to the elderly to college students–from Michael Banciewicz, of Church on the Hill Community Initiatives; he was followed by a moving poem about homelessness from Jayne Eisan, whose performance left the audience in moved silence before impassioned applause.

We were also lucky enough to hear presentations from students of several religious and non-religious backgrounds, including Humanist, Buddhist, Muslim, and Christian, about how their traditions address the issue of hunger. HUNGERally attendees heard students share passages from the Qur’an, a story about a Christian saint, and a Walt Whitman poem, along with various other presentations.

At the end, we had attendees break into groups for interfaith dialogue, answering questions about their religious/non-religious traditions and the importance of service and fighting hunger. The students were so eager to discuss that, even before we finished asking them to divide up into groups, they had already jumped into dialoguing. It was incredible to see students from all different backgrounds and all different campuses coming together and discussing how they want to fight hunger in an interfaith setting.

On the commitment cards we handed out at the event–which included a space for guests to write down a concrete commitment to fighting hunger–we also encouraged people to post about HUNGERally online. Quotes from people talking about HUNGERally on social media included such inspiring things as, “We’re all human beings, so let’s unite for things that matter!” and, “[W]e are more alike than we are unalike.”

All in all, this event was a beautiful beginning to the vision Chris and I had formulated on that first Starbucks meeting, a vision to have interfaith groups from all the Boston-area colleges work together in a city-wide community. Hopefully there will be many more lattes, meetings, and intercollegiate interfaith events to come. 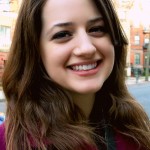 Abigail Clauhs is a sophomore at Boston University, studying religion while minoring in English and anthropology. She was raised in a variety of churches, including Catholic, Presbyterian (baptized by a sprinkling of water as a baby), and Southern Baptist (dunked underwater in the baptistry pool), but now considers herself a Unitarian Universalist. Abigail runs the Boston University Interfaith Council and works at BU’s Marsh Chapel. She is passionate about getting students from the many different colleges in the Boston area (and the world at large) to work together in interfaith service. Also, she likes cooking weird food, drinking chai, and writing tolerable (maybe) poetry. You can follow her on Twitter (@jigsawfaith) or on her blog (jigsawfaith.wordpress.com).

March 29, 2012 Good > Without God
Recent Comments
92 Comments | Leave a Comment
Browse Our Archives
get the latest from
Nonreligious
Sign up for our newsletter
POPULAR AT PATHEOS Nonreligious
1