After Ferguson, toward a better humanism

After Ferguson, toward a better humanism September 2, 2014 Sarah Jones

Nearly a month after Michael Brown’s death, protests still fill the streets of Ferguson, Missouri. The grief playing out on the pavement is focusing long-overdue national attention on racial injustice and the reality of white supremacy. For many, it’s also translated to activism. From rallies to marches to teach-ins, communities are organizing themselves to effectively fight for change.

For most people involved, this activism is simply an extension of work that’s been going on for centuries. The communities leading this charge for justice are black communities, who have always labored for justice, often without recognition or meaningful assistance.

Atheist communities tend to be absent.

Instead, as the University of Pennsylvania’s Anthea Butler notes, people of faith primarily led the charge. While there are certainly examples of police abusing religion throughout the protests, there are even more examples of clergy marching with the people of Ferguson to demand justice for Michael Brown. That’s part of a historical pattern: Among America’s most marginalized groups, religion has often acted as a beneficial organizing force.

There are, of course, some factors to consider, here. Atheists are still a demographic minority, which means they’re bound to be present in fewer numbers, and they’ve never been absent from social justice struggles. In fact, they’ve often played prominent roles, particularly in the fight for racial equality. A. Phillip Randolph, James Baldwin, Lorraine Hansberry, Langston Hughes…the historical roster goes on, and these luminaries do not lack for contemporary philosophical descendants.

At the same time, very few people of color are really nonbelievers. There are likely a number of reasons for this—so many, in fact, it probably isn’t possible to do them justice in a single blog post. I’ll point out briefly, though, that humanists like Sikivu Hutchinson have already argued that movement atheism is frequently silent about issues that predominately affect people of color. And last month, Rice University’s Anthony Pinn argued that the movement had largely failed to speak out about Ferguson and the issues brought to the fore by Brown’s death.

I don’t think this is necessarily an indictment of atheism itself. Atheism, narrowly, is simply a position on the existence of God. That narrow lens, however, also means there’s no room to focus on Ferguson, or other social issues that religious communities tend to excel at addressing.

Fortunately for atheists who want to dismantle white supremacy, there’s humanism. But let’s be very clear about what humanism is and what it isn’t. If we’re adhering to humanism’s historical roots, we’re interested in promoting justice as well as reason. And that means we need to take a critical look at the way we discuss religion and approach people of faith. It may also mean we need to radically adjust our perspectives on both.

An atheism structured around the belief that religion is evil, or stupid, or a mental illness stigmatizes people of faith by default. When you take aim at religion, you are not always punching up. In fact, you may contribute to the very problems you think you’re trying to fix.

And I’ll take this another step. Any perspective that promotes the idea that all people of faith are deluded at best and malicious at worst is actually incapable of accomplishing racial equality. It simply isn’t possible to fight institutionalized prejudice while repeating stereotypes that disproportionately affect members of marginalized groups.

That version of atheism is incompatible with humanism, and with social justice itself. It’s not even compatible with reality, since it erases the very existence of progressive people of faith.

The fight against white supremacy is too important to be derailed by disagreements over the existence of God. Unfortunately, derailment is all these simplistic attitudes about religion accomplish. It isn’t necessary to treat religion like an unqualified good in order to acknowledge that it’s also not universally bad.

If your goal is social justice, that’s exactly the balance you should seek to strike. If it isn’t, you’re left only with a position on God—and without much to say about Ferguson, or what comes after it.

September 1, 2014
Why I don't care about deconverting believers
Next Post 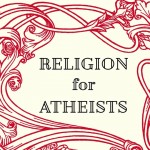 September 2, 2014 de Botton and living in the absence of God
Recent Comments
0 | Leave a Comment
Browse Our Archives
get the latest from
Nonreligious
Sign up for our newsletter
POPULAR AT PATHEOS Nonreligious
1