Who are our potential religious allies?

Who are our potential religious allies? September 5, 2014 Andreas Rekdal

In his introductory post for the relaunch of NonProphet Status, Vlad asks whether dropping our obsession the question of God’s existence might open new doors. “Can we work [with religious people] to build a better world?”

The answer, in one simple graph, is yes.

Last week, political scientist Tobin Grant (who blogs for Religion News Service) released this excellent data visualization of how religious identity correlates with political ideology. The chart is based on data from the Pew Religious Landscape Survey.

As you can see, our circle intersects with the circle representing liberal members of the Jewish faith. Moreover, while the two groups differ slightly when it comes to government services, we are more or less perfectly aligned in our vision for a more value-agnostic government.

When we study this dimension of the chart more closely, we find that quite a few other groups stick out as potential allies. Unitarians oppose government-dictated morality even more than we do, as do Agnostics.

If we’re willing to reach upwards just a little, we also find that Buddhists, nondenominational (non-evangelical) Christians, members of the United Church of Christ, Quakers (listed as Friends), and Anglicans are generally sympathetic with us.

There, then, are our allies in creating the kind of secular policies we envision.

“Nones” are not Atheists

There is a common misconception that “nones” are just atheists who avoid the label. But while the “nones” are not religiously affiliated, this does not necessarily mean that they do not hold some religious beliefs. Indeed, in 2012, Pew noted that over two thirds (68%) of “nones” do believe in God.

This chart puts further emphasis on that point. While “nones” are in the same neighborhood as Atheists when it comes to political preferences, the groups are clearly distinct. 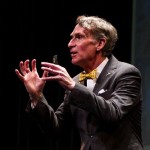 September 5, 2014
4 Things Bill Nye Should Have Said to Ken Ham
Next Post

September 5, 2014 End of summer playlist
Recent Comments
0 | Leave a Comment
Browse Our Archives
get the latest from
Nonreligious
Sign up for our newsletter
POPULAR AT PATHEOS Nonreligious
1