Early last month, friend of the blog Mike Lehmann wrote a guest post about his take on the Ken Ham vs. Bill Nye debate, “4 things Bill Nye should have said to Ken Ham.”

Several days ago, Ken Ham wrote a response to Lehmann. After responding to each of Mike’s points, he wrote:

Sadly, the blog I quoted simply highlights many of the common misconceptions that I constantly experience when I talk with Christians and church leaders who have chosen to accept man’s teaching on Earth’s history over God’s Word. We need to pray that the church will return to its foundation—the infallible Word of God—beginning in Genesis!

What sorts of misconceptions did Lehmann put forward? As an example:

Lehman [sic] then goes on to state that young-earth creation is “incredibly arbitrary.” He claims that those who interpret Genesis literally do not apply this hermeneutic throughout the rest of Scripture. He calls this “selective literalism.” But are we really just arbitrarily picking and choosing what to take literally? Not at all! Scripture is made up of different types of literature, called genres. Each of these genres has different rules of interpretation. It’s the same as the different way that you read a newspaper article and a love poem—you won’t read both the same way! Different rules of interpretation apply. It’s the same with Scripture. Historical passages are meant to be understood in a literal, straightforward way, but poetic literature (like the Psalms) uses a lot of figurative language (much like we do in English—similes, metaphors, personification, figures of speech, and so on).

That Ham even suggests that poetic parts of the Bible aren’t literally factual, then the burden gets even greater for young earth creationists—you have to counter the vast evidence and scientific consensus on common ancestry and descent with modification from a convergence of evidence from independent fields which, in John Paul II’s words, were “neither sought nor fabricated,” and even more, you also have to justify why the part of the Bible you’re basing your objections on should even be interpreted as historical. Surely Genesis could be accepted as poetry or allegory, no different from Psalms, without impacting “the authority of God’s words.”

These are just my scattered thoughts about the exchange. Mike Lehmann has a much more thorough rebuttal at his site. You can read it here.

October 28, 2014
Interview with James Croft on interfaith and FergusonOctober
Next Post 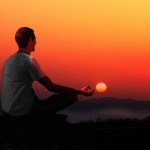 October 30, 2014 Satya Nadella's remarks were sexist, not Buddhist
Recent Comments
0 | Leave a Comment
Browse Our Archives
get the latest from
Nonreligious
Sign up for our newsletter
POPULAR AT PATHEOS Nonreligious
1