#illridewithyou: a reminder that the little things do matter

In the wake of the Boston Marathon bombing in 2013 on the comedy news quiz Wait Wait Don’t Tell Me, Moz Jobrani said:

His tone is light-hearted and he is saying it for laughs, but he is also making a serious point. In the hours and days following such violent and high-profile attacks, Muslims (and Sikhs, Hindus, and people of Middle Eastern descent generally) worry about both a compounding of anti-Muslim sentiment and the potential for retaliatory hate- and fear-fueled attacks. This isn’t without reason.

Not surprisingly, in the midst of the terrible events in Sydney this month, similar concerns arose. In response, the twitter hashtag #illridewithyou emerged. In case you haven’t heard, the history of the hashtag starts with a woman in Sydney, inspired by a private Facebook post, tweeting her route on public transit and offering to ride with anyone wearing religious attire who did not feel safe. Her intention, I imagine, was to do what she could to positively impact her community in the face of a scary situation.

Her hashtag took off like wildfire. Most of the tweets came from Sydney specifically and Australia generally, but others in the US, the UK, and around the world have used to the hashtag to similarly show their support of the Muslim community despite the deadly actions of one individual.

As many have said before me, this community wide commitment and expression of solidarity is inspiring. While not completely closing the gap that divides, it is a big step. The hashtag and its surrounding demonstration is meaningful, but not just a gesture—it  is a practical act of caring. My favorite thing about it is that the call to action is something a single person can do.

The originator of #illridewithyou could not have predicted the width and breadth of the movement she sparked. I can imagine that all she could have hoped for was helping one, or two, or even a dozen people feel safe in a highly charged, potentially dangerous situation. I know I am often overwhelmed by the magnitude of the obstacles we face, and I have found myself wallowing in the despair that one person cannot make a difference.

What #illridewithyou has reminded me is that reconciling humanity is as much about the small gestures as the big movements, perhaps even more so. When there’s thousands of people acting together, even something small, like taking the empty seat on a crowded bus next to the woman wearing a hijab can make a big difference. 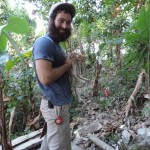