The religious right, not new atheism, is driving the secular left

Lisa Wade at PS Mag asks a question to grapple with for anyone chalking the rise of the nones to new atheist writers or atheist activism. She says:

Over the past 40 years, Americans have become increasingly likely to deny an affiliation with a religion. . . Overall, however, Americans do not report a corresponding decline in the a belief in God, life after death, or other religious ideas. What’s going on?

Wade cites a recent study by sociologists Michael Hout and Claude Fischer to help explain. According to Hout and Fischer “generational differences in belief add nothing to explaining the cohort differences in affiliation.” They go on:

Once the American public began connecting organized religion to the conservative political agenda — a connection that Republican politicians, abortion activists, and religious leaders all encouraged — many political liberals and moderates who seldom or never attended services quit expressing a religious preference when survey interviewers asked about it.

Compare first figure from Hout and Fischer’s paper, which shows the rise of the “Nones”— 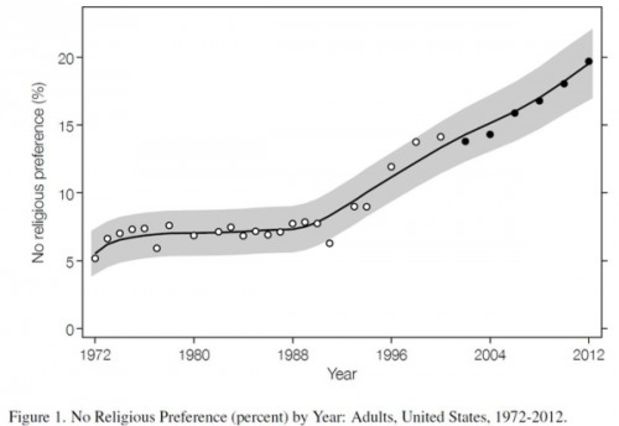 —with the fourth figure from their paper, which shows that religious belief has more or less been completely stable during the same period: 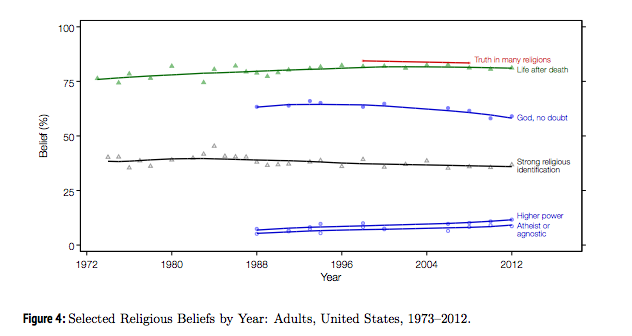 Political backlash and generational succession apply mainly to religious affiliation, in particular; they are much less relevant for religion more generally. Neither the percentage believing in God nor the percentage stating a strong religious preference have changed substantially since the late 1980s.

From there on, the stats and models get rather dense and abstract, but they conclude:*

If some churches were to diversify their message, appealing to issues beyond sexual politics, perhaps the alienated liberals might think about church again. America’s churches have long been important institutions for social connections and cultural production. Over the last twenty-five years, religiously inactive people have identified less and less with them, partly because so many churches have made conservative political statements and some have backed conservative political initiatives. Time will tell if personalized religion is sustainable or if belief fades without public profession and community practice.