Why Craig Hicks is our problem

Why Craig Hicks is our problem February 11, 2015 Sarah Jones

“When it comes to insults, your religion started this, not me,” he wrote. “If your religion kept its big mouth shut, so would I. But given that it doesn’t, and given the enormous harm that your religion has done in this world, I’d say that I have not only a right, but a duty, to insult it, as does every rational, thinking person on this planet.” His cover photo declared, “Yes, I want religion to go away.” According to a parent of two of the victims, Hicks regularly harassed them for their Muslim beliefs.

There is debate, of course, over his motive for this specific crime. Chapel Hill police have characterized the incident as the violent outcome of a long-running “parking dispute,” but they haven’t yet ruled it out as a hate crime, either. It’s entirely possible that the shooter’s unabashed hatred for religion contributed to his decision to murder three young Muslims.

I don’t think Craig Hicks set down his copy of “The God Delusion,” walked out of his house and shot three people to death because he thought that’s what Richard Dawkins would want. But I do think Craig Hicks’ hatred for Islam made his Muslim neighbors appear like a threat when they really weren’t. I think it made it easier for him to snap.

It reminds me of the murder of Jordan Davis. Davis’ killer, Michael Dunn, told police he shot the unarmed black teenager in self defense. Witnesses, however, claimed that Dunn complained about Davis’ “thug music,” and according to Think Progress, letters he sent from prison reflected strong bigotry. “The more time I am exposed to these people, the more prejudiced against them I become,” he wrote.

Michael Dunn probably didn’t wake up in the morning determined to murder a black child. He probably didn’t think I am going to shoot this child because he’s black as he pulled the trigger. But his animus toward black Americans undeniably made it easier for him to act as he did.

Religious affiliation is not the same thing as skin color, as atheism’s “Islam is not a race” contingent is so quick to remind us. Yet in this specific context, they are linked, and always have been when the subject is Islam in the West. Anti-Muslim prejudice doesn’t only affect practicing Muslims; it affects ex-Muslims, and Sikhs, and anyone else who’s brown and has a name the ignorant associate with Islam.

I’ve never been entirely certain why it’s so controversial to talk about anti-Muslim prejudice in the atheist world. It exists, and what’s more stereotypically atheist than insisting people acknowledge reality? But there has been a persistent popular refusal to accept that the problem is real, and a related inability to acknowledge its scale.

If we, as atheists, want to avoid hypocrisy, it’s time for us to admit we have a problem. It’s time to admit that the lionization of reactionary figures like Ayaan Hirsi Ali feeds hate and encourages bigotry.

And if you insist that Hicks decided to kill his neighbors because he was mentally ill, but that Islamic extremists commit violence because of religion, you are part of the problem.

I wonder what it’s going to take for people to understand that violent rhetoric begets violent action. I wonder when people will be able to accept that a passionate belief in the freedom of speech can coexist with the condemnation of hateful and ignorant anti-religious sentiment.

There is a line between the reasonable criticism of oppressive doctrine, and condemning the entire religion. By extension, this perspective inescapably labels a religion’s adherents as unfit to live in modern society. That dehumanizes people. It turns them into targets of suspicion.

To Craig Hicks, Deah, Yusor, and Razan’s religion made them targets. Among atheists, he is not alone in his opinion. It is time to clean our house.

February 11, 2015
How anti-theism can contribute to violence against muslims
Next Post 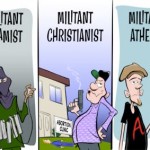 February 12, 2015 Responses to the Chapel Hill Shooting
Recent Comments
0 | Leave a Comment
Browse Our Archives
get the latest from
Nonreligious
Sign up for our newsletter
POPULAR AT PATHEOS Nonreligious
1