A Mormon activist who frequently promotes “white culture” recently posted a sexist tweet encouraging women to give up becoming scientists and stay at home to raise children instead. The response was… less than positive.

Wife With A Purpose, a blogger and Youtuber who refers to herself as a “former SJW now a follower of Christ,” said smart women can choose to be scientists or make six more scientists. “Which serves society better?” she asked.

First of all, I think anyone who understands the problems overpopulation poses would agree becoming a scientist is more helpful to society than having six kids (you have no idea if they would become scientists or not – and if they happen to be girls they shouldn’t, according to this worldview).

Secondly, why does this Christian blogger think women are incapable of multi-tasking? Isn’t it possible a woman could be a smart scientists and… *gasp* have babies?

There were a lot of responses to the sexist thread, including this one:

A smart scientist, definitely. You don’t order up children like groceries – and they may end up as unproductive tradlife bloggers, instead.

Now, it should be noted that the image from the blogger’s original tweet has been removed due to copyright violations. She later complained that this was a form of censorship.

In any case, Wife With A Purpose ultimately reposted the tweet with an image that isn’t being used without permission. This time she changed the number of children to eight, because having six kids isn’t crazy enough.

(1st Tweet was taken down, so let’s do this again)

Smart ladies, you can be a scientist or make 8 scientists, which is better for society? pic.twitter.com/1ZxtmA4F8U

Overall, I’m not surprised she wrote this sexist tweet. I wasn’t aware of her existence before today, but a quick glance at her profile tells me everything I need to know about her unhealthy message. She isn’t just sexist, though. She also champions “White Pride” and takes every chance she can to demean other races.

you can’t shame us anymore, we can be proud of who we are, same as everyone else. White pride is here to stay!

This one is also charming:

On Pinterest there are boards for Beautiful Black and Asian Babies but no boards for beautiful white babies. Why isn’t she allowed pride? pic.twitter.com/4l5iFA68et

This woman has a lot of crazy views and more than 30,000 followers on Twitter, so my only hope is that she doesn’t influence too many of them in a negative way. Given the responses she got to this post, however, my guess is many of these people aren’t “fans” in the traditional sense of the word. 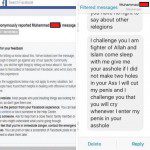 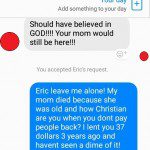