A Sheriff’s department in Oklahoma is under fire for promoting the Christian faith ahead of all other religions, in violation of this country’s Separation of Church and State, by posting Bible quotes on its public website and leading prayer services on the front steps of the county courthouse. When confronted about it, an official offered to “say a prayer.”

A fan and Tulsa Resident named Benjamin wrote to notify me that the Rogers County Sheriff’s Office advertises a quote on its website from the King James version of the Bible. The quote, from Matthew 5:9, says, “Blessed are the peacemakers: for they shall be called the children of God.”

Benjamin also voiced his concerns to the Sheriff’s department itself, using its contact form on its website. He explained that, “as a department of government,” promoting Christianity is a “violation of the Constitution’s Establishment Clause.”

“You are sworn to uphold the laws of Rogers County, not the laws of just one of the thousands of gods worshiped around the world,” Benjamin wrote to them. “Please remove this passage, which clearly suggests that one particular religion is true or relative to the duties of law enforcement.”

Jon Sappington, the Undersheriff at Rogers County Sheriff’s Office, dismissed Benjamin’s concerns and offered to “say a prayer” for him.

“We have received your emails of concern and at this time we are working to change our website. However, once changed we will leave that image as it is. I’m sorry that this image causes you so much grief to keep you up at night. I will say a prayer for you and your family.”

Condescending message aside, it seems like Mr. Sappington completely sidestepped the question at hand. Instead of addressing the potential violation of Separation of Church and State, or at least explaining why the Bible quote isn’t one, he resorted to childish remarks about how Benjamin – a resident of the community – is kept “up at night” by it. He then offered a prayer, which could complicate the question instead of resolve it.

Benjamin also pointed out that – ignoring the website – the Rogers County Sheriff’s Office has a habit of indirectly promoting Christianity, including by leading and promoting prayer services that have become synonymous with Christian prayer events. Earlier this month, the department posted about such a service on its public Facebook page.

Looking into the Sheriff’s office even further, I discovered that promoting a National Day of Prayer is probably the least of the department’s concerns when it comes to promoting Christianity and prayer. In 2016, they posted a complete endorsement of a specific church and their student ministry programs. They ended the post with a quote from the Bible.

Benjamin has also contacted a local chapter of the American Civil Liberties Union (ALCU) and the Freedom From Religion Foundation (FFRF), but neither advocacy group has responded. The sheriff’s office hasn’t responded to my requests for comment.

If you are interested in contacting the department about this issue, you can reach Undersheriff Sappington at jasappington@rcsheriff.org. 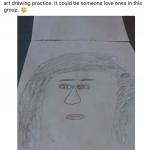 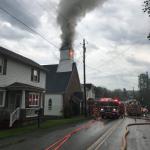 May 14, 2018 God's House Struck by Lightning, an “Act of God,” Shutting Down Services
Recent Comments
0 | Leave a Comment
"In talking about the 'secular revolution' which took place in the American academy during the ..."
Luke Breuer My Facebook Fan Page Has Been ..."
""""Cults will do everything in their power to convince you that they are not a ..."
Linda Miller Former Reality TV Star Now Leads ..."
"So, given that the vast majority of the accusations referred to in this article — ..."
Paul Co-Founder of Popular Atheist Facebook Group ..."
"which is true except when you become insane in which case a doctor should come"
samuel Sam Harris is Wrong: Religious Extremism ..."
Browse Our Archives
get the latest from
Nonreligious
Sign up for our newsletter
POPULAR AT PATHEOS Nonreligious
1