A former pastor who was convicted last month of the rape and attempted murder of his own adopted daughters is now seeking a new trial.

The Northern California pastor, Raul Diaz Moreno, faces up to 120 years in prison after being found guilty by a jury who said he raped the girls for many years before trying to kill them. He’s now trying to overturn that conviction by getting a new trial.

Moreno’s attorney, Kathy Lynn Trosclair, asked the court for more time to file for a new trial. That motion was granted by the court, according to the Merced Sun-Star’s report.

His attorney, Kathy Lynn Trosclair, asked the court for more time to file for a new trial.

Trosclair pointed to some discrepancies in how the jury filled out verdict paperwork, as well as changes she said were made to a verdict sheet by the judge. She said she was also not allowed to question one of the victims on the stand about statements she said were related to her pregnancy.

Those details are some of the at least 15 reasons Diaz Moreno could deserve a new trial, Trosclair said on Monday, including not being provided with police reports until after the trial began.

Trosclair was since relieved as the defendant’s attorney, so another attorney will be appointed to his case. That lawyer will be charged with actually filing the request for a new trial, which is why Trosclair requested more time to complete the process.

This is certainly a worrying development, but Merced County Deputy District Attorney Scott Drexel seems to think we shouldn’t be worried. He said he’s upset that the victims might have to deal with even more questions and depositions, but that the sentencing will go forward.

“I can tell you that I’m confident that sentencing will proceed,” Drexel said after the hearing. “I’m just always concerned about victims. This is so difficult for victims to come in here and talk about.”

The case is especially difficult to discuss for the victims because of the long-running abuse they endured at the hands of their own adoptive “father.” Moreno, the former head of Victory Outreach church, took the vulnerable kids and groomed them for sex through violence and manipulation over a number of years. He did that while maintaining the illusion that he was a man of God following a divine moral compass.

During the month-long trial, prosecutors described a life of abuse that victimized the young sisters from an early age. Taken in by Diaz Moreno after they essentially were abandoned by their mother early on, the sisters were sexually abused beginning as early as kindergarten, according to prosecutors.

The jurors found Diaz Moreno guilty of all 14 charges, including multiple counts of attempted murder, assault, shooting at police, aggravated sexual assault, sodomy by force, lewd acts and oral copulation with minors. He faces a minimum of 120 years to life in prison, according to prosecutors.

Let’s hope this conviction stands, and that these poor girls get the justice they deserve. 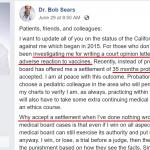 July 1, 2018
Anti-Vaxx Doctor Gets Probation for Vaccine Exemptions, Blames Medical Board
Next Post 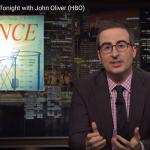 July 4, 2018 John Oliver: Science is a “Miracle” Without “2,000 Years Worshiping Scientists”
Recent Comments
0 | Leave a Comment
"In talking about the 'secular revolution' which took place in the American academy during the ..."
Luke Breuer My Facebook Fan Page Has Been ..."
""""Cults will do everything in their power to convince you that they are not a ..."
Linda Miller Former Reality TV Star Now Leads ..."
"So, given that the vast majority of the accusations referred to in this article — ..."
Paul Co-Founder of Popular Atheist Facebook Group ..."
"which is true except when you become insane in which case a doctor should come"
samuel Sam Harris is Wrong: Religious Extremism ..."
Browse Our Archives
Related posts from No Sacred Cows