Andrew Yang Says Dr. Oz Has Made “A Lot of People Smarter About Their Health”

Democratic presidential candidate and tech entrepreneur Andrew Yang promoted Dr. Oz this week, saying the former surgeon has “made a lot of people smarter about their health.” 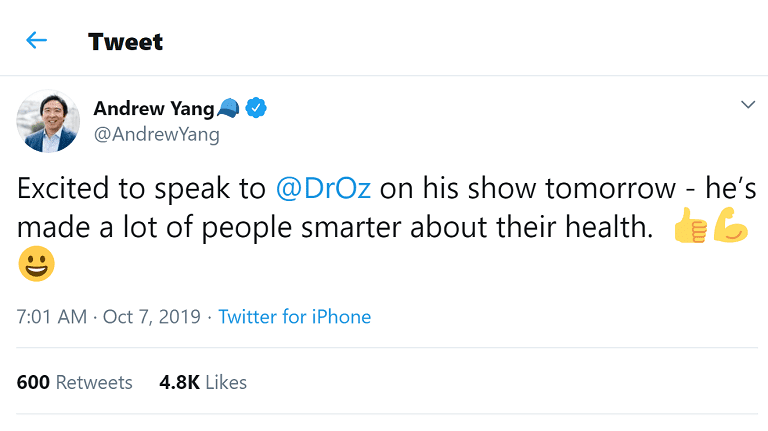 Yang, who is often hailed by groups that emphasize science and reason, sent the tweet to his 918.7K followers on Monday, Oct. 7, ahead of an appearance on Dr. Oz’s show.

Excited to speak to @DrOz on his show tomorrow – he’s made a lot of people smarter about their health. ���

Dr. Oz, who was recently appointed to a position in Trump’s Administration, has been frequently criticized for promoting unproven cures that some say are dangerous. To see Yang promote Oz was jarring for some, as evidenced by the comments from his followers and from science communicators.

Oz is a quack who sells snake oil. Going on his show and tweeting positively about it means you endorse quackery.

I understand the need to get more exposure, but please review some of the harm Dr. Oz has caused. Endorsing Dr. Oz in any way seriously clashes with an evidence-based worldview.

Dude…… Dr. Oz is NOT well respected in the medical community. Might be good for PR, but be careful with any endorsements. And PLEASE don’t advocate for giving government or businesses MORE control over our bodies than they already have.

Other people responding to Yang pointed out specific things that Dr. Oz has promoted in the past, including “psychic mediums” and so-called “miracle berries.” The TV host doctor has also come under fire for selling “magic beans” as part of a purported diet plan.

A lot of folks getting triggered by this . Do y’all expect him to slander Oz before going on his show or refuse to go on. We need exposure. We are 4 months from primaries and people don’t know who Yang is still . Chill out

With @DrOz having a primary demographic of Women ages 25-54 I’m really excited to see you help @AndrewYang spread his message and increase name recognition.

That’s a lot of future #YangGang!#HumanityFirst#YouTubeAndrewYang

Dr. Oz’s interview with Yang is scheduled to air Friday, Oct. 11, as part of the host’s candidate check-up series. The questions are about “the real future of medicine,” according to Dr. Oz’s website. 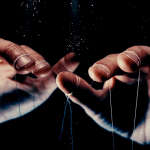 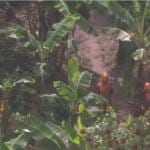