The Real Scandal in Ukraine Involves, You Guessed It, Nazis

The Real Scandal in Ukraine Involves, You Guessed It, Nazis November 1, 2019 Joe Ponzillo

As of today, President Trump is deep in a scandal that has many people calling for his impeachment. It involves allegations that he called President Zelensky in an attempt to gain compromising information on potential political rival Joe Biden, and allegedly suspended military aid to the country on that basis.

Setting aside the issue of the legality of this, and whether or not it will result in Congress impeaching the President, there exists an angle to this that has been left relatively untouched by many reporters in the American press. It goes along with a sadly shocking byline that has been consistent throughout the presidency of Donald Trump: white supremacy.

Ukraine is a complicated country. It was the last territory to leave the Soviet Union following the dissolution of the country. In the decades since, it’s seen many problems, but a major one involved its proximity to the European Union, which culminated in the Euromaidan protests from late 2013 to early 2014.  This chaos saw the overthrow of then-president Viktor Yanukovych and the placing in power of Petro Poroshenko. Some characterize this as a U.S. backed coup, others as a popular revolution.

Wherever you fall on the issue, it’s undeniable that the people leading the events in the street were groups like Right Sector and Svoboda, both of which are far-right extremist groups whose members have engaged in a variety of acts of racist terrorism.

American propaganda outlets such as Radio Free Europe have admitted that groups like Right Sector have been complicit in dozens of attacks on Roma. Groups like Svoboda were part of the Alliance of European National Movements, whose membership included the explicitly fascist British National Party (Whose youth wing spun off to the now-banned terrorist group National Action, some of those plans thankfully and alarmingly were foiled in the last year), and the explicitly fascist Social Movement Tricolour Flame. Some politicians with the party even called Mila Kunis a “dirty Jew” (The more accurate translation of the word is unsuitable for print).

Russia then used the prominence of these groups (some of whom had constituencies which had 30+% of the vote) as a justification to annex Crimea to “protect ethnic minorities.” Whether or not you buy that reasoning is up to you, but this isn’t piece isn’t about Russia; it’s about Ukraine, and the actions that set off a conflict in the area that rages to this day and has led to the rise of some of the most vile reactionaries in the modern era.

During this conflict, various groups began to emerge from the woodwork, one of which was Azov. The organization formed in May of 2014, and quickly gained notoriety for being an effective military unit in the region. However, the group was staffed by Neo-Nazis. If there’s any doubt, take a look at their flag: It has a wolfsangel symbol linked to the SS das Reich, and sonnenrad that was also misappropriated by Nazis. That symbol was also found on the manifesto of the Christchurch mosque shooter. 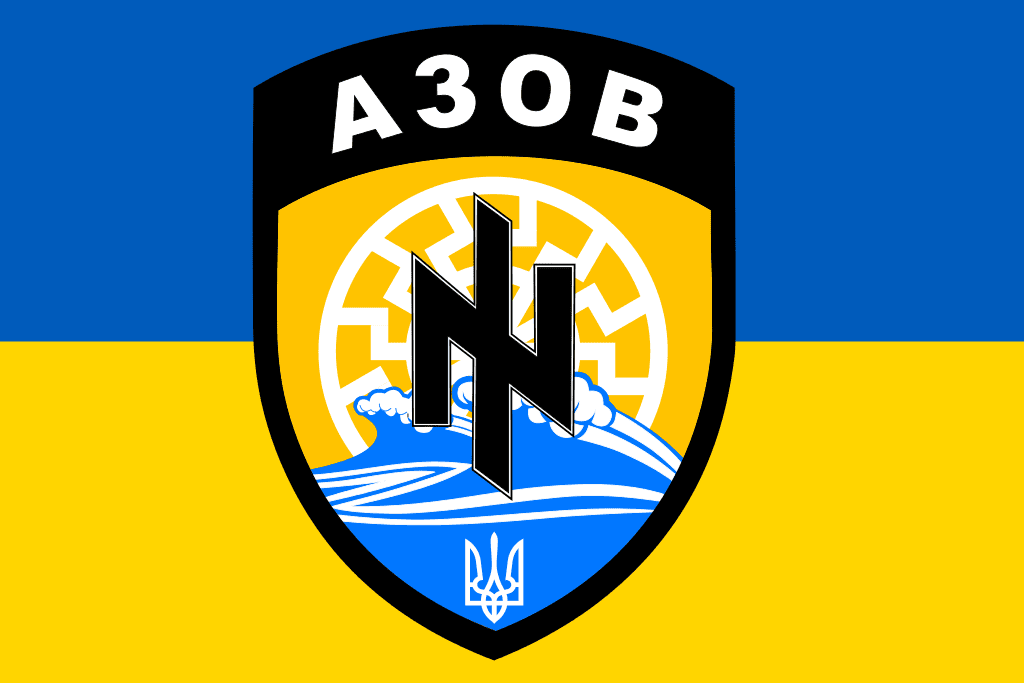 The group has had members try to deny this by claiming that the symbol stands for “Idea of Nation” (being a Latin I and an N superimposed onto each other), yet the Ukrainian alphabet’s letter corresponding to N isn’t featured in their symbol. It would be curious for self-described ultra-nationalists to explain their symbol’s meaning based on pronunciations that aren’t native to their own language.

This battalion has received weapons from multiple countries. American-made RPGs have been posted on Azov’s website, as well as Israeli rifles. The U.S. has sent Uniformed Military Advisors to train Azov Battalion members, too. In their own country, they can be seen with dozens of tanks donning the Azov Flag, as well as APC combat vehicles that were domestically manufactured. In essence, whatever munitions or weapons Ukraine is receiving are also received by Azov, and the reason is that Azov is no longer just a rogue group.

As of 2015, Azov has been incorporated into the Ukrainian National Guard. They also host military training camps for children where staff members can be seen sporting white pride tattoos and having kids chant, “Death to enemies of the Nation, Ukraine above all” in response to the phrase “Слава Україні,” which is used by the Organization of Ukranian Nationalists in the second World War, a fascist group which aided with Nazi extermination campaigns in the Ukraine. For all intents and purposes, Azov is serving as an armed wing of the Ukrainian government, which is more than happy to have fascists serving as paramilitary units in the Donbass conflict, as well as street patrols.

These problems are shockingly frequent in Ukraine. In fact, many of these Nazi groups, in addition to being armed by the U.S., are given propaganda tools and support by the U.S. as well. Neo-Nazi extremist Andriy Volodymyrovych Parubiy was given support by John McCain and Paul Ryan despite founding the precursor to Svoboda, the Ukrainian Social Nationalist Party. Additionally, the photograph the Washington post used in its obituary to McCain used a photograph taken alongside Oleh Tyahnybok, a Ukrainian politician with Svoboda who decried that Ukraine was controlled by “Judeo Bolshevism” and “Muscovite Jewish Mafia” who control the Ukraine. Meanwhile in Kiev, various nationalist organizations are given support by Radio Free Europe to pump out antisemitic propaganda glorifying the Ukrainian Insurgent Army. The results of institutional support for fascist groups has had alarming ramifications in the country.

Two weeks ago, Ukrainian Prime Minister Oleksiy Honcharuk was pictured at a Neo-Nazi rock concert organized by C-14 (a spin off of Svoboda) militants who are currently on trial for murdering a reporter. Mainstream news outlets outside of the Times of Israel had no coverage of such a shocking scandal, and unless you happened to follow the newspaper of the American Communist Party, Peoples Daily, an american audience would never have known that the country its political leaders had been fighting desperately to supply with weapons had a Prime Minister headlining at a Neo-Nazi event!

These actions have alarming real-life consequences back at home. An American soldier, Jarrett William Smith, was recently arrested after meeting with the Azov Battalion and plotting to make explosives. He was sharing information with another far-right extremist and former U.S. solider Craig Lang, who was fighting with Right Sector in Ukraine, and is wanted on murder charges. Jarrett Smith was openly sharing information on making IEDs in far-right Facebook groups, and was arrested on September 23, 2019.

U.S. soldiers plotting to go abroad and fight with foreign armies and then use their skills at home is alarming enough, but the far-right networks from other countries have also manifested here. Groups like the Rise Above Movement were trained by Azov and were part of the Charlottesville rally, the Christchurch Shooter had connections to Azov, a French Neo-Nazi  loaded with weapons was stopped from attacking a mosque by police after being trained with weapons by Azov, and a Swedish bomb attack was carried out by Azov-trained militants.

The threat posed by Ukrainian Neo-Nazism is very real, and it should be alarming that people with similar views to Richard Spencer and tastes in Tiki Torch marches have tanks, bombs, guns, and were supported by Democrats and Republicans alike for years.

Yet, depressingly, media outlets have utterly failed to mention these alarming ties and problems facing Ukraine. Reuters posted an article about “nationalists” marching against the peace process in Donbass, yet their thumbnail had the flags of Svoboda and Right Sector plastered across it, with members of Ukraine’s armed forces being alarmingly present in the march. These groups have threatened to overthrow the government if it pushes for peace in Donbass.

None of these concerns have been brought up by mainstream outlets when mentioning the most recent scandal involving Ukraine. Fascist paramilitaries have been armed by America, as it’s done all over the world. From Indonesia to Chile where protests have left thousands jailed and dozens killed in the last weeks, the U.S. has supported fascism in the name of profit, and that’s the real scandal in Ukraine. That’s the scandal that few in halls of power will admit. 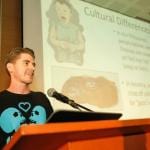 October 29, 2019
I'm Going to Riverside, California, to Talk About Beliefs, Gods, And Religions
Next Post 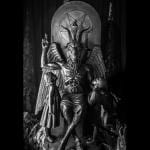 November 1, 2019 The Satanic Temple—Known for Church-State Activism—is Launching a TV Service
Recent Comments
0 | Leave a Comment
"You wrote a good article. I'm very much impressed with this article. Thank you for ..."
locks click Christian Man Found Dead After Backpacking ..."
"I haven't seen you "denying" science, so much as spouting a bunch of incoherent rubbish ..."
Raging Bee Former Reality TV Star Now Leads ..."
"I will tell you this though, we don't deny science as this article claims. That's ..."
Merrick Lorent Former Reality TV Star Now Leads ..."
"If he's such a genius, why can't you specify any achievements other than "we're harmless?""
Raging Bee Former Reality TV Star Now Leads ..."
Browse Our Archives
get the latest from
No Sacred Cows
Sign up for our newsletter
POPULAR AT PATHEOS Nonreligious
1