Language of the Unheard: Why We Riot

Language of the Unheard: Why We Riot April 29, 2015 Sincere Kirabo

By now, almost everyone is acquainted with the story of Freddie Gray’s inexcusable death, a “mysterious” occurrence that took place while Gray was in custody of Baltimore police. This tragedy—a word I’ve grown weary of reciting but is nonetheless applicable—sadly adds to the ever-burgeoning death toll of (Black) citizens murdered or brutalized by law enforcement, an agency purported to be bearers of justice and protection.

In the aftermath of Gray’s death, more protests and outrage ensued. Midst a majority who demonstrated for justice this past Saturday grew a splinter collective that responded to the state of oppressive affairs with non-peaceable protesting. The fracas spilled over to Monday, and has led to the present, widespread “rioting,” or discourteous (as opposed to civil) disobedience.

These events have prompted headlines and snide commentary that tend to conflate the entire scene of public outcry with hooliganism, and further the already common narrative of Blackness corresponding with thugism and savagery. As scant images of Blacks looting and destroying property go viral, it’s clear the media—along with many who indirectly support the normalized theme of complicity and prejudicial treatment—prefer emphasizing cherry-picked samples of lawlessness rather than aiming their journalistic expertise at the root causes.

There are those who cannot comprehend rioting. The “why” behind ransacking places of business is dismissed as altogether illogical, or inexcusable. I wager many view this behavior as the mark of those who lack decent rearing, civility or an adequate amount of intelligence. While I don’t endorse these actions, I take umbrage with narrow-minded perspectives that wholly denigrate rioting as the work of the mischievousness, or worse, imply it’s the result of some kind of “organic dysfunctionalism” unique to Blacks that implies we simply can’t help ourselves due to our nature.

The idea that unrest is the work of “misguided souls” and is dismissed as reckless behavior without factoring in the source of agitation requires an encyclopedic ignorance of U.S. history, the mechanics of human nature and psychology, and an impressive unawareness of race-based propaganda transmitted through political and cultural systems both uncritically accepted and propagated generation after generation.

For example: How many have come across the mostly unpublicized images of Blacks cleaning up or whites looting in Baltimore? These realities remain obscure precisely because the visual messages counter the already well-established beliefs trumpeted through virtually every conceivable social medium.

Who recalls the Detroit race riots of 1943, a conflict sparked by deeply rooted racial animosities. The dilemma was an offshoot of the white supremacy stranglehold, reinforced by the Ku Klux Klan’s palpable presence, which ensured numerous indignities including the squalor of segregated housing would act as a catalyst for racial tensions erupting into a 3 day riot that saw 34 dead and 433 injured.

Remember the summer of 1964? Riots were prevalent in both the north and south due to overt manifestations of inequality. That August saw three Freedom Summer activists—James Chaney, Michael Schwerner and Andrew Goodman—murdered by Klan members.

David Dennis, the head of CORE (Congress of Racial Equality) in Mississippi, was tapped to give a conciliatory eulogy for Chaney, the sole African American of the three. Though he intended to abide by the rules and toe the line of respectability politics, Dennis became flooded with outrage and delivered an impromptu, impassioned message that symbolizes the essence of what rioting is about. Regarding his speech, Dennis said,

“All the different emotions, things we’d been through leading up to this particular moment began to come out. To boil up in me. And then looking up and seeing Ben Chaney. James Chaney’s little brother. I lost it. I totally just lost it.” – David Dennis, American Experience Freedom Summer Documentary (2014)

Who can forget Watts, 1965? An arrest that goes bad involving 21-year old Marquette Frye became the flashpoint for a six day long riot. As usual, what the person being arrested and onlookers report conflict with police reports, but ultimately, 34 died, around 1,000 injured, about 4,000 arrested, and property damage valued at 40 million was the result. There were those—typically those unfamiliar with racial profiling and the exploits of racial injustice—referred to it as a mindless insurrection. Mind you, this eruption occurred after frequent displays of disproportionate treatment and excessive brutality.

For white America, unrest happens unexpectedly and the culmination of racial marginalization, inadequate housing, and economic deprivation is ignored or devalued. An accusatory finger is then extended at those with the nerve to reply to a continued lack of justice with wrath rather than turning the other cheek.

In 1965 (like today), those removed from the suffering saw only an unnecessary nuisance and an ungrateful lot of “sub-dwellers” who were beneficiaries of the Voting Rights Act Lyndon Johnson had just signed into law. They found the burden to empathize unbearable. The unrest revealed fundamental problems that surpassed rhetoric and commonly touted markers of progress. This is akin to how, for example, those within present-day LGBTQIA communities are yet stigmatized and oppressed despite the gay marriage equality being used as a yardstick for progress.

And what of 1968? A few years removed from Watts and nothing had dramatically changed. Blacks were still being routinely mistreated, imprisoned, abused, and murdered at a disproportionate rate. Unrest flared up in response. Things momentarily died down only for the cycle to recur.

Though remaining a voice of “militant nonviolence,” Dr. Martin Luther King Jr. understood the profound impatience that fueled unrest. After all, it was the same impatience that initiated the African American Civil Rights Movement to begin with. At a public appearance addressing these issues, King said the following:

“But it is not enough for me to stand before you tonight and condemn riots. It would be morally irresponsible for me to do that without, at the same time, condemning the contingent, intolerable conditions that exist in our society. These conditions are the things that cause individuals to feel that they have no other alternative than to engage in violent rebellions to get attention. And I must say tonight that a riot is the language of the unheard.

The deficiency of social justice from yesteryear echoed in the 1992 LA Riots, current Ferguson, and various other instances salted throughout time beyond practical measure. Maybe it all wouldn’t be such a big deal if the protesters were frantic over a sporting event or pumpkins instead of, you know, intensified frustration over recurrent racial disparities and Black folks being murdered.

This pattern of inequity, objection, inaction, protest, idleness and unrest has been rinsed and repeated to the point of ad infinitum. It’s rather callous to decry the exasperation of citizens fed up with systemic injustice who are reacting to yet another young, unarmed man slain by police, this time after being apprehended alive. And that’s without mentioning the unruliness of law enforcement that is conveniently being overlooked in preference for select instances of civilian response. This bias was highlighted by one perceptive Tweeter: 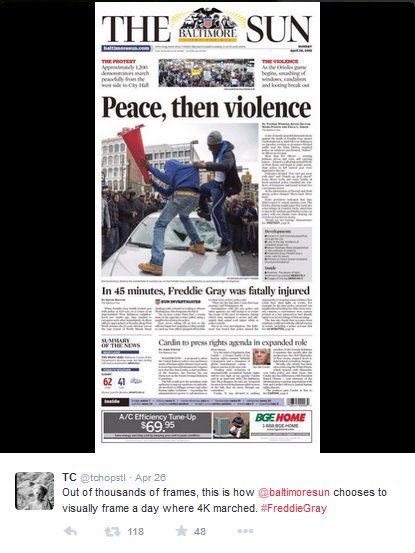 The infrastructure of honed prejudice and government legitimated terror is an overwhelming thing to consider, and even more daunting to experience, witness, and endure as routine. It’s hard to fault those who consider the institution of police to be a sordid brotherhood that, judging by an overabundance of incidents reported, witnessed, and recorded from both past and recent, could eerily be mistaken for klaverns of state-funded gangsters.

To whites who belittle rioting under these circumstances, please: Check your privilege. Think more carefully about what you’re saying, and what you’re ignoring. To Blacks who also choose to vilify these individuals engaged in rebellion against a system that structurally disadvantages them: Check your internalized racism and possible allegiance to respectability politics.

I, too, once held that desire to not rock the boat, to acquiesce and placate the hand that marginalizes me. However, somewhere along the way I had a rude-awakening akin to what James Baldwin felt a long time ago. Baldwin once articulated this feeling:

Those who disparage rioting, we get it: You think riots are counterproductive. Duly noted. However, it’s important to comprehend where these acts prompted by persistent institutional injustice stem from. The term “sick and tired of being sick and tired” is applicable and articulates the mental state of desperation, escalated anxiety, and vexation.

What manner of Stockholm syndrome has been ingrained into a culture that produces scores of otherwise rational beings that spout clichés like, “Violence only breeds more violence” without contemplating the chronic prick of violence that actually bred the violent reaction?

Even Tupac Shakur “got it”: People riot because they are weary and their pleas aren’t being appreciated. Eventually, after being repeatedly served with an absence of justice, asking wears to begging, begging to aggressive engagement, and aggressive engagement to uprising. This cycle flows from cause to effect, not the other way around.

Perhaps “non-violence” is the more preferable path, but let that path be a two-way street etched in an equal reciprocation of respect. This whole one-way compliance of the oppressed to non-violence doesn’t seem to be working out so well, and hasn’t since…well, ever. 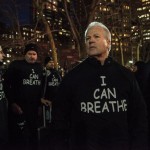 April 22, 2015
When the Unenlightened Delight In Tragedy
Next Post 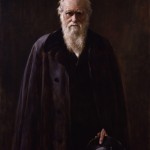 May 1, 2015 The Darwinian Golden Rule: How to Better Avoid "Forgetting" Facts That Contradict Your Worldview
Recent Comments
0 | Leave a Comment
Browse Our Archives
get the latest from
Nonreligious
Sign up for our newsletter
POPULAR AT PATHEOS Nonreligious
1 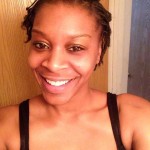 Nonreligious
Why #SayHerName Matters If #BlackLivesMatter
Notes From An Apostate 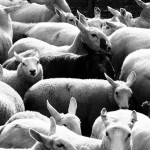 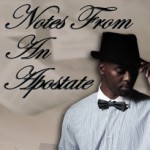 Nonreligious
How Humanists Can Be #BlackLivesMatter Allies
Notes From An Apostate

Nonreligious
What Sam Harris Gets Wrong About Racism And...
Notes From An Apostate
TRENDING AT PATHEOS Nonreligious