Black America, Wake Up – White Jesus Won’t Save You

Alton Sterling. Philando Castile. Alva Braziel. Three Black lives recently obliterated over the span of a mere five days by those sworn to aid citizens, not assassinate them.

Sadly, if history is any predictor, countless more members of Black America will unjustly end up a trending hashtag on social media. I don’t want to spend too much time indicting the system that produces, allows, and then excuses police malfeasance that disproportionately affects people of color. We already know the very foundation of law enforcement was enmeshed with slavery and that the institution has always been an outlet to “protect and serve” the interests of whites while brutalizing and coercing communities of color.

I also refuse to derail this particular discussion with unpacking the false comparisons between this country’s longstanding tradition of anti-black policing tactics and conduct with the shooting of police in Dallas and Baton Rouge. The two recent shootings of police do not magically erase the pervasive and well-documented fundamental flaw in law enforcement practices that results in the disproportionate treatment of non-whites. The horrifying actions of both shooters were not motivated within a vacuum sans context or provocation. Instead, they are exasperated responses to a systemic issue many still choose to ignore.

I’ll save those discussions for another day.

Today, I want to speak directly to all my Black Christian kinfolk: As we continue this carousel of mourning and fatigue of more Black life unduly lost, can we as a collective please consider having a true come-to-Jesus moment and confront our ineffectual dependence on religious faith?

Since these more recent strings of tragedies, I’ve observed the typical social patterns within the Black community in personal spaces and social media as a reply to the regularity of tragedy: an uptick in calls for prayer and stronger commitments to God.

Why? At what point will the majority of the Black population comprehend that the road to social liberation is paved by self-determination and not through the subtext of deities and pie in the sky stories?

A smoldering fury of rage and vexation hackles across my body when I see Black people retreat into the absent arms of white Jesus in the face of hardship. To observe this futile fetishizing of Iron Age lore concerns me not only because these god beliefs are monumentally insubstantial, but because devotion to forever delayed salvation engenders acquiescence, respectability conciliation, and patently false hope.

Anti-black systems of oppression are ever-present in this nation—idol worship won’t get us free.

It’s unfortunate how easily we are able to romanticize the past. We don’t truly appreciate the fibers of history—all the countless hours, days, months, years, and decades of Black America’s tears and blood. The echo of our ancestor’s dehumanized torment. The animus and degradation transmitted from shackle to Black Codes to Jim Crow to mass incarceration and “post-racial” racism.

Where is this God so many continue to speak so highly of?

You keep talking about the goodness of Jesus, but the invisible too closely resembles the non-existent.

Why continue pretending piety and longsuffering are effective tools to treat racial oppression and injustice? For generations, we have prayed, fasted, sung, turned the other cheek, forgiven our oppressors while they spit in our face, and waited patiently for heavenly deliverance. When will we be able to fracture this willful self-deception and recognize the god hypothesis is a failed cruel hoax that’s about as useful as a screen door on a submarine?

I once had all the faith. I come from a Pentecostal background and was once a self-described “Jesus Freak” who scrutinized three versions of the Bible front to back, pages filled with notes, highlights, and bookmarks. I’m an atheist precisely because I know what the Bible says – that’s what compelled me to study church history, and then world religions (both major and obscure), various forms of mythology and world history, ancient rituals and culture, philosophy and science, anthropology of religion, cognitive science of religion…and more.

We must face facts: Many of the existing god beliefs and associated religious traditions are recycled or repurposed ideas, derivatives of fantastical tales either assimilated or amended through conflict, acculturation, or political committee.

Meanwhile, religious devotees are able to reimagine the grotesque into the palatable and reconcile faith in an imagined higher power that has never manifested in any explicit way to save us (or anyone) from a lethal legacy of racialized disenfranchisement. It truly takes Herculean feats of religious unreason to consider centuries of incalculable emotional, mental, and physical torment and indignities and yet fix your mouth to say “God is good!”

God beliefs are a symptom of illusory pattern perception rather than anything quantifiable in the real world. If Black America is to overcome, it must be done by our own might. Substantive change requires tangible action—get off your knees.

While I understand why Black Christianity remains so prevalent, that doesn’t mean it’s impossible for us to evolve our thinking and realize church funds, sharp Sunday threads, and altar calls have done exactly zilch to redress anti-black marginalization in this nation.

There’s a social activist movement underway continuing the unfinished business of the Civil Rights Movement era. Want to make a difference? What we need is grit and involvement in the struggle, not a tribe satisfied with the empty promises of scriptural white noise.

Please, for the sake and love of our own futures: Abandon your fabled white messiah. Wake up. We are our own salvation.

June 28, 2016
Busting Through The Overton Window -- An Interview with David Silverman
Next Post

July 22, 2016 The Term "White Jesus" Explained
Recent Comments
0 | Leave a Comment
Browse Our Archives
get the latest from
Nonreligious
Sign up for our newsletter
POPULAR AT PATHEOS Nonreligious
1

'Satanic' school head, pictured with a...
The Freethinker
Related posts from Notes From An Apostate 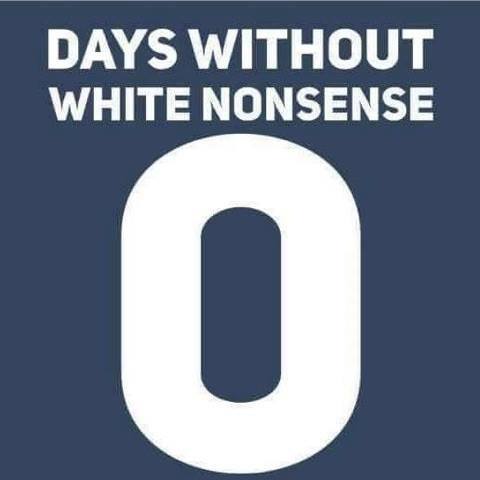