“Why Don’t We Follow All of the Old Testament Laws”
“Do you eat shellfish?” How often have we heard this retort to appeals to ethical demands of the Old Testament? J.D. Greear wrestles with this question and offers a helpful answer. “So the next time someone starts saying that you’re arbitrarily picking and choosing from the Bible, arm yourself with the civil/ceremonial/moral. You aren’t being arbitrary. You’re being faithful. You’re reading the Old Testament how the New Testament teaches you to. So eat your shrimp without guilt, and don’t throw away your 10 Commandments just yet.”

“How Should Christians Use God’s Law?”
While we are on the subject of the law, I am enjoying Ryan Reeves blog on historical theology at the Gospel Coalition. In this post he discusses the three uses of God’s law. It’s helpful for those of us who follow Jesus to understand these distinctions. “For me, the question must start with defining what the Law is for Christians. How is it used? If we are no longer ‘under Law’, yet not free to live as Corinthians, how do we apply the Law to our lives? Does any attempt to obey the Law make us legalists?”

“The Lost Art of Disagreement”
We often think we live in the most divided culture in American history, but there have been times when the tide of division was higher. I do think we have reached a crescendo though in our inability to disagree with people and remain friends. Because of our digital age, it’s more possible than ever to build an echo chamber where everyone agrees with you. Samuel James writes about the relationship between John Adams and Thomas Jefferson, showing how their friendship in spite of their disagreements provides a model for us. “Honest, empathetic disagreement may not make for exciting talk radio or high cable ratings, but it is essential both for civic liberty and Christian mission. Persuasion is, after all, harder and less titillating than bombast, but without it, our heralding of both spiritual and political truth is undermined. We must not stray irretrievably far from the spirit of Adams and Jefferson. To do so would be to lose much more than an election.”

“15 Pieces of Writing Advice from C.S. Lewis”
I enjoy C.S. Lewis’ writing immensely, both his fiction and non-fiction. Justin Taylor shares some great writing advice from a master craftsman. “Take great pains to be clear. Remember that though you start by knowing what you mean, the reader doesn’t, and a single ill-chosen word may lead him to a total misunderstanding. In a story it is terribly easy just to forget that you have not told the reader something that he needs to know—the whole picture is so clear in your own mind that you forget that it isn’t the same in his.”

A Peculiar Glory
Christians in the 21st century need to gain a fresh understanding of both the complete truthfulness and sufficiency of God’s word to meet the challenges we face. John Piper’s new work on the Bible will be a great help to us on this journey. “God’s peculiar glory shines through his Word. The Spirit of God enlightens the eyes of our hearts. And in one self-authenticating sight, our minds are sure and our hearts are satisfied. Justified certainty and solid joy meet in the peculiar glory of God.” 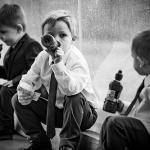 March 29, 2016
The Joy and Pain of Consistent Parenting
Next Post

April 14, 2016 A Few Good Reads
Recent Comments
0 | Leave a Comment
Browse Our Archives
get the latest updates from
One Degree to Another
and the Patheos
Evangelical
Channel
POPULAR AT PATHEOS Evangelical
1

Luther on Advent
Cranach
Related posts from One Degree to Another