The Best Quotes from Hidden Christmas

Every year the Christmas season provides a great opportunity for believers to reflect on Jesus’ incarnation and how its message should change us. All too often, we don’t begin to think through how we can put these truths before our own hearts and our family until the season is upon us. This year Tim Keller gave us a great gift by releasing his new book, Hidden Christmas, four weeks before the beginning of the Advent season.

I started reading through Hidden Christmas this morning and found myself unable to put it down. Keller works through the narratives of Jesus’ birth from Matthew and Luke as well as the opening paragraph of 1 John. In doing so, he reminds us of our great need for a Savior and the overwhelming grace of God in sending his Son. Hidden Christmas shows how the message of Christmas undermines our pride and self-sufficiency while giving us hope, peace, and security in the process.

As I read I found myself highlighting on almost every page and nearly went through a whole canister of book darts. These are my favorite quotes from Hidden Christmas.

“The emphasis on light in darkness comes from the Christian belief that the world’s hope comes from outside of it… Jesus comes as the Light because we are too spiritually blind to find our own way. Jesus became mortal and died because we are too morally ruined to be pardoned any other way. Jesus gave himself to us, and so we must give ourselves wholly to him.” (2)

“In the Bible the people who actually saw and heard Jesus never reacted indifferently or even mildly. Once they realized what he was claiming about himself, either they were scared of him or furious with him or they knelt down before him and worshipped him. But nobody simply like him. Nobody said, ‘He is so inspiring. He makes me want to live a better life.’ If the baby boy at Christmas is the Mighty God, then you must serve him completely.” (13)

“Christmas means that we are so lost, so unable to save ourselves, that nothing less than the death of the Son of God himself could save us. That means you are not somebody who can pull yourself together and live a moral and good life.” (17)

“Matthew does not begin his story of Jesus’ birth by saying, ‘Once upon a time…’ He says, ‘This is the genealogy of Jesus Christ.’ That means he is grounding what Jesus Christ is and does in history. Jesus is not a metaphor. He is real. This all happened.” (21)

“These Gospel narratives are telling you not what you should do but what God has done. The birth of the Son of God into the world is a gospel, good news, an announcement. You don’t save yourself. God has come to save you.” (22-23)

“Christmas means, then, that for you and me there is all the hope in the world.” (47)

“The fact that God became human and emptied himself of his glory means that you should not want to hang out only with the people with power and glitz, who are networked and can open doors for you. You need to be willing to go to the people without power, without beauty, without money. That is the Christmas spirit, because God became one of us.” (50)

“Christianity says God has been all of the places you have been; he has been in the darkness you are in now, and more. And, therefore, you can trust him; you can rely on him, because he knows and has the power to comfort, strengthen, and bring you through.” (52)

“Only Jesus says, ‘I have come for the weak. I have come for those who admit they are weak. I will save them not by what they do but through what I do.’ Throughout Jesus’ life, the apostles and the disciples keep saying to him, “Jesus, when are you going to take power and save the world?’ Jesus keeps saying, “You don’t understand. I’m going to lose all my power and die- to save the world.’” (77)

“We should be just a shocked that God would give us- with all our smallness and flaws- such a mighty gift. And so no Christian should ever be far from this astonishment that, ‘I of all people, should be loved and embraced by his grace!’” (89)

“If in order to be at peace we need to be in control, beholden to no one, then we will constantly be afraid, because we learn as life goes on that we are at the mercy of people and forces we can neither predict nor manage.” (113)

“And what about the greatest fear we have- of surrendering control? How can we trust him with our lives? The answer is that the little baby in the manger is the mighty Christ the Lord. So think, perceive, ponder. If the omnipotent Son of God would radically lose control- all for you- then you can trust him. And that should undermine your fear.” (114)

“There is an offensiveness to Jesus himself, and in every time and place it will find expression, and anyone who identifies with him will be seen as offensive too.” (122)

“For one thing, God’s peace comes after the inner conflict of repentance. Repentance is like antiseptic. You pour antiseptic onto a wound and it stings, but it heals. That’s how repentance works. It creates terrible inner turmoil, because you have to admit things you don’t want to admit. You have to acknowledge weakness that you don’t want to acknowledge. However, that’s the only way to the new peace of forgiveness, reconciliation, and forgiveness. And it undermines your pride and self-righteousness, a terrible burden for you to bear, as well as those around you. There’s no way to get into the new peace that repentance brings without going through that pain.” (125)

“When you say, ‘Doctrine doesn’t matter; what matters is that you live a good life,’ that is a doctrine. It is called the doctrine of salvation by your works rather than by grace. It assumes that you are not so bad that you need a Savior, that you are not so weak that you can’t pull yourself together and live as you should. You are actually espousing a whole set of doctrines about the nature of God, humanity, and sin. And the message of Christmas is that they are all wrong.” (131)

“Christmas and the incarnation mean that God went to infinite lengths to make himself one whom we can know personally.” (135)

“The Christ life begins not with high deeds and achievements, but with the most simple and ordinary act of humble asking. Then the life of hope and joy grow in us over the years through commonplace, almost boring practices. Daily obedience, reading and prayer, worship attendance, serving our brothers and sisters in Christ as well as our neighbors, depending on Jesus during times of suffering. And bit by bit our faith will grow, and the foundation of our lives will come closer to that deep river of joy.” (140-141)

Related Posts:
“The Best Quotes from The Meaning of Marriage“ 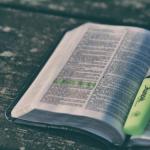 November 10, 2016 How to Read the Bible Every Day
Recent Comments
4 Comments | Leave a Comment
""Jesus did not come to explain away suffering or to remove it. He came to ..."
Christiane Smith The Lord is Near in Our ..."
"OOMMGG!! I never could figure it out until you said the reasons you liked a ..."
Jaime Lopez Ortega Why I Switched from a Digital ..."
"God also blesses us when we take measures to extricate ourselves from trouble."
Karen Silver How Do I Know that God ..."
"I never heard any of these sermons but I am sure they were shallow and ..."
Kostya2 How to Prepare a Sermon When ..."
Browse Our Archives
get the latest updates from
One Degree to Another
and the Patheos
Evangelical
Channel
POPULAR AT PATHEOS Evangelical
1

Do "Rights" Limit or Empower the...
Cranach
Related posts from One Degree to Another