The Best Quotes from The God Who is There

The Best Quotes from The God Who is There January 25, 2018 Scott Slayton 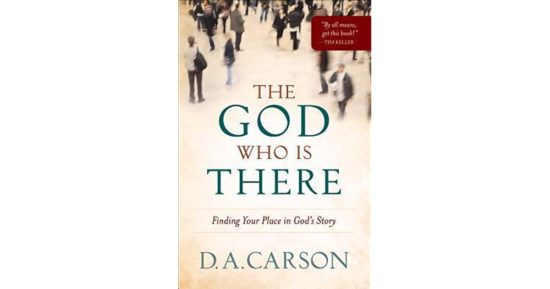 I am quite embarrassed at how long it took me to get around to reading D.A. Carson’s The God Who is There. This book has been out for several years and is an outstanding overview of the storyline of the entire Bible. Carson walks through the high points of the biblical story, showing how God reveals himself each step along the way and how this story all hangs together on the life, death, burial, and resurrection of Jesus. If you are looking for an introduction to the Bible’s message, there would be no better place to start.

Here were my favorite quotes from The God Who is There.

“The person who does not want more than a bumper sticker introduction to Christianity may find this book a bit much.” (9)

“My existence is dependent, finally, on him; his existence is self-existence. God has no cause; he just is. He always has been. By contrast, everything else in the universe began somewhere, whether in a big bang or in human conception–somewhere. God made it all. That means that everything in the universe apart from God is finally dependent upon God.” (19)

“Christians should never descend to the place where working on a manufacturing floor or working as a secretary or working driving a bus or doing research chemistry is “secular,” somehow divorced from God.” (22)

“We shall discover that God as he is described in the Bible is incalculably loving yet simultaneously utterly holy, such that when he confronts rebellion, sin, and all that is tawdry and evil, he is–there is no other word for it–angry.” (44)

“Using the name of God or of Jesus when you ‘mean nothing’ by it is not profane because you have spoken a magic word that you are not supposed to use, as if only priests have the right to say abracadabra. The usage is profane because it is common, cheap. We are dealing with God, and we must say and do nothing that diminishes him or cheapens him. It is at best disrespectful, ungrateful, and demeaning; at worst it de-gods him and thus sinks to the level of idolatry.” (61)

“Sin is never merely individualistic. You cannot commit any sin, no matter how private, without it having repercussions not only in your own life, but also in the community where you live.” (68)

“Fifty billion years from now, if I may dare speak of eternity in the categories of time, no one will be talking about the significance of Pol Pot, but every cup of cold water given in the name of Jesus will still be remembered and celebrated, because the Lord watches over the way of the righteous; the way of the wicked will perish.” (90)

“We human beings are not always going to get explanations, but God is bigger than we are and sometimes we just have to trust him.” (99)

“The closest any human beings get to ‘seeing’ God in this broken world is the Word-made flesh, the Lord Jesus himself.” (110)

“Biblical Christianity is so much more than simply making a decision for Jesus so that we can live happy lives.” (123)

“Sadly, precisely because our culture finds it relatively easy to believe that God is a God of love, we have developed notions of God’s love that are disturbingly spongy and sentimental and almost always alienated from the full range of attributes that make God, God.” (136)

“The word ‘world’ in John’s Gospel typically refers not to a big place with lots of people in it but to a bad place with a lot of bad people in it. The word ‘world’ in John’s Gospel is this human-centered, created order that God has made and that has rebelled against him in hatefulness and idolatry, resulting in broken relationships, infidelity, and wickedness.” (140)

“He does not classify himself as a martyr but as a sacrifice. He is not simply a sad victim of a vicious conspiracy or a nasty historical mistake. He is a willing sacrifice.” (153)

“He cannot save himself if he is to save others because the very purpose of his hanging on that tree is to bear my sin in his own body on the tree. If he does save himself, I am damned. It is only by not saving himself that he saves me.” (159)

“You can trust a God who not only is sovereign, but bleeds for you. Sometimes when there are no other answers for your guilt or your fears or your uncertainty or your anguish, there is one immovable place on which to stand. It is the ground right in front of the cross.” (162)

“Idolatry is anything and everything that displaces God, that makes me try to find my identity and place in the universe by appealing to something or someone other than God.” (195)

“Where no transformation at all is evident, there is scant reason for thinking a person is a Christian.” (198)

“If we have come to experience the forgiveness of sins and reconciliation with the living God, it is only because of the grace of the gospel. We are never more than poor beggars telling others where there is bread; we are never more than condemned prisoners who have found pardon and who want others to do the same.” (210)

“Finding all of our joy and contentment in the God is who there, this God who discloses himself forever and perfectly, inexhaustively, before his own blood-bought people, means that all of the culture of the new heaven and the new earth will be suffused with shalom, with the well-being, the flourishing, the social peace whose measureless source is the one who sits on the throne, and the Lamb.” (221-222)

Related Posts:
“The Best Quotes from The Meaning of Marriage“

“The Best Quotes from 12 Ways Your Phone is Changing You“

January 21, 2018
Why Time Away from Your Phone Would be Good for Your Soul
Next Post

January 31, 2018 Why You Should Read Outside of Your Comfort Zone
Recent Comments
1 Comment | Leave a Comment
Browse Our Archives
get the latest updates from
One Degree to Another
and the Patheos
Evangelical
Channel
POPULAR AT PATHEOS Evangelical
1

Answering a Question about the Trinity:...
Roger E. Olson
Related posts from One Degree to Another