History writing and historiography (mentioned in podcast, but not discussed. Skip down to continue with podcast notes)-

“What were the ancient conventions for writing history? What did it mean to record history? What can be called good or accurate history writing by standards that were in existence when the Bible was written?” -Peter Enns, Inspiration and Incarnation: Evangelicals and the Problem of the Old Testament (highly recommended).

“What the Bible offers us is an uneven continuum and a constant interweaving of factual
historical detail (especially, but by no means exclusively, for the later periods) with purely legendary ‘history’; occasional enigmatic vestiges of mythological lore; etiological stories; archetypal fictions of the founding fathers of the nation; folktales of heroes and wonder-working men of God; verisimilar inventions of wholly fictional personages attached to the progress of national history; and fictionalized versions of known historical figures. All of these narratives are presented as history, that is, as things that really happened and that have some significant consequence for human or Israelite destiny. The only evident exceptions to this rule are Job, which in its very stylization seems manifestly a philosophic fable (hence the rabbinic dictum ‘There was no such creature as Job; he is a parable’) and Jonah, which, with its satiric and fantastic exaggerations, looks like a parabolic illustration of the prophetic calling and God’s universality.”

“Nevertheless, these stories are not, strictly speaking, historiography, but rather the imaginative reenactment of history by a gifted writer who organizes his materials along certain thematic biases and according to his own remarkable intuition of the psychology of the characters. He feels entirely free, one should remember, to invent interior monologue for his characters; to ascribe feeling, intention, or motive to them when he chooses; to supply verbatim dialogue (and he is one of literature’s masters of dialogue) for occasions when no one but the actors themselves could have had knowledge of exactly what was said. The author of the David stories stands in basically the same relation to Israelite history as Shakespeare stands to English history in his history plays. Shakespeare was obviously not free to have Henry V lose the battle of Agincourt, or to allow someone else to lead the English forces there, but, working from the hints of historical tradition, he could invent a kind of Bildungsroman for the young Prince Hal; surround him with invented characters that would serve as foils, mirrors, obstacles, aids in his development; create a language and a psychology for the king which are the writer’s own achievement, making out of the stuff of history a powerful projection of human possibility. That is essentially what the author of the David cycle does for David, Saul, Abner, Joab, Jonathon, Absalom, Michal, Abigail, and a host of other
characters.”

number parallelism
Proverbs 6:16- “There are six things that the Lord hates, seven that are an abomination to him.” How many items in the that following list of things the Lord hates? Seven.

On the Joseph Smith Translation (JST)

What can the JST represent?

[“The translation was not a simple, mechanical recording of divine dictum, but rather a study-and-thought process accompanied and prompted by revelation from the Lord.”- Matthews, Matthews, A Plainer Translation, 39. See also Jackson and Peter Jasinski, “The Process of Inspired Translation- Two Passages Translated Twice in the Joseph Smith Translation of the Bible” BYU Studies.

Ein Gedi where David hides in a cave 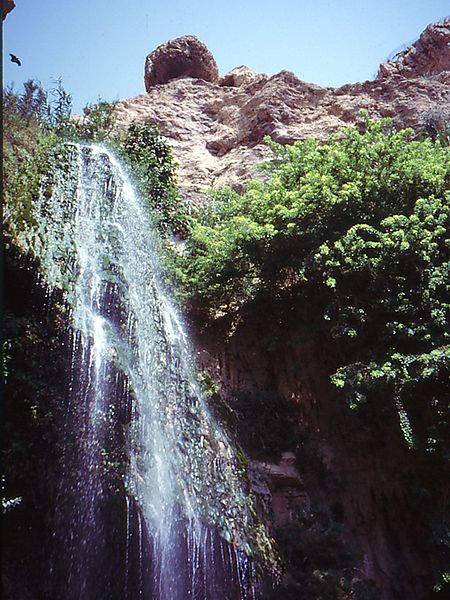 and Saul comes in to “cover his feet.

“David cut the hem of Saul’s cloak to prove that he could easily have killed Saul if he had wanted to, but that he would not harm the Lord’s anointed. The passage has a deeper significance, however—in some ways the opposite significance. The hem that David cut off was an extension of Saul’s person and authority. David did in fact harm the Lord’s anointed; that is why David immediately felt remorse for what he had done: “Afterward David reproached himself for having cut off the hem of Saul’s cloak” (1 Samuel 24:6). According to the New English Bible translation, David’s “conscience smote him” (1 Samuel 24:7). Although protesting that he had not lifted a finger or a hand against the Lord’s anointed (1 Samuel 24:10), David had in fact committed a symbolic act—cutting off Saul’s hem—of enormous significance. This significance was not lost on King Saul; he understood full well: “Now I know that you will become king”- Jacob Milgrom “Of Hem’s and Tassels” Biblical Archaeology Review 09:03 (May/June 1983)

[Who produced the chapter headings? “I think it would be no breach of etiquette or of confidentiality if I were to say with pleasure that Elder Bruce R. McConkie produced those headings. Now I don’t know anybody else who could do it so well.” Robert Matthews, text of a roundtable discussion printed in Monte S. Nyman and Robert L. Millet, The Joseph Smith Translation, p.300]

Speaking of “the Joseph Smith Translation items, the chapter headings, Topical Guide, Bible Dictionary, footnotes, the Gazeteer, and the maps,” said, “None of these are perfect; they do not of themselves determine doctrine; there have been and undoubtedly now are mistakes in them. Cross-references, for instance, do not establish and never were intended to prove that parallel passages so much as pertain to the same subject. They are aids and helps only.” -“The Bible, a Sealed Book” in Sermons and Writings of Bruce R. McConkie, 290.

What about the Bible Dictionary? From the intro– The Bible Dictionary “is not intended as an official or revealed endorsement by the Church of the doctrinal, historical, cultural, and other matters set forth. Many of the items have been drawn from the best available scholarship of the world and are subject to reevaluation based on new research and discoveries or on new revelation. The topics have been carefully selected and are treated briefly. If an elaborate discussion is desired, the student should consult a more exhaustive dictionary.”

Next week, David, Bathsheba, and Psalm 51.