Having babies eleven years apart does present unique challenges, particularly when your religion has dramatically transformed during that time. My youngest was born last November and my eldest will be twelve in September. The first time around, I considered myself a Wiccan who worshipped the Greek gods and I now self-identify as a Hellenic Polytheist. The difference between those two designations is not a subtle one and I’m still figuring out some of the finer points of a Hellenic practice. I’m not a reconstructionist, which means that I believe what the ancients did as their practice is important to know, but often not relevant to a modern practice. This generally means that I have to put a lot of thought into what sorts of rituals I do, how to do them, and why. “Because that’s how the ancients did it” isn’t really a good enough reason for me. There’s a lot of time, space, and cultural context between here and now and there and then. Having recently had a baby, I’ve been thinking about what sorts of rituals around baby-having are appropriate for a family such as mine and how to be a modern Hellenic Polytheist mom. More often than not, particularly where birth and motherhood are concerned, ancient Greece is not a good example of culturally (and medically) appropriate behavior. 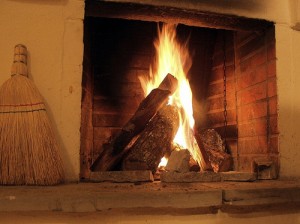 We know that back then you weren’t supposed to give birth in a temple, which is good to know if you’re very pregnant and visiting Nashville. Fortunately, here’s a hospital a stone’s throw away from our Parthenon, so there’s not much danger of that happening. We also know that infanticide was common for deformed or otherwise unwanted children. That’s not really useful, either, though this is what you find the majority of information on when you google “infant” and “ancient Greece.” One useful bit we do know is that on the fifth or tenth day of life, a baby was taken around the hearth, introduced to the gods and the family, and named. There were purification rituals, particularly for those who participated in the birth, prior to the event and presents and nosh after. This is called the Amphidromia, and unlike most ancient Hellenic rituals, this one is simple enough to adapt to modern life and isn’t that far off from the sort of ritual I like to do anyway.

With my first one, I had either just completed a Wiccan first degree or was about to and I had decided then that a “Wiccaning” wasn’t going to be the right ritual for us. The ritual as written in the Farrars’ A Witches’ Bible, centers around Cernunnos and Aradia and involves giving the baby a “hidden name.” Even if I had substituted Greek gods, it still wouldn’t have been the right ritual. I wanted the focus to be more on blessing the baby and, like in the Amphidromia, formally introducing her to the gods and the community. Those things are in a Wiccaning, but are not the focus of it, as such. I’d had the idea of something from a fairy tale where all the good fairies gave magical gifts to the baby and adding the blessings of the gods to that. I didn’t know about the Amphidromia then, but that was more or less what we did. There were still Wiccan undertones, such as choosing one god and one goddess to call and introducing her to the four quarters, but I’d already begun to deviate from the Wiccan model of worship.

That sort of ritual still appeals to me, though it will be far less Wiccan-flavored now than it had been even then, mostly because I don’t feel obligated toward that ritual structure anymore. Finding that there is a Greek name for what I was already going to do is convenient, but I don’t feel any more obligated to the ancient ritual than I do to the Wiccan one. The most important thing is that the little one has been blessed and recognized as part of the community. She’ll officially be one of us and she’ll be protected by the gods and the community, but free to choose her own path as she grows.

In addition to her personal and group practice as a priestess of Apollo, Sunweaver works as interfaith clergy with a diversity of religious groups in the Middle Tennessee area. She is a founding member of the Rutherford County Women of Faith and has worked with the area interfaith center, Wisdom House, to help bring positive awareness to the non-Abrahamic religions. She is a fiber arts enthusiast as well as a mother and a Master’s student in biology. 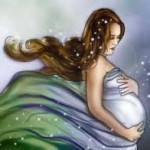