Hold to the vision…

“To dance is to reach for a world that doesn’t exist,
To sing the heartsong of a thousand generations,
To feel the meaning of a moment in time.”

“I am only one, but I am one.  I cannot do everything, but I can do something.  And I will not let what I cannot do interfere with what I can do.”  ~Edward Everett Hale

After writing about human trafficking for the Patheos book club and then reading a truly horrifying article about incredible, unimaginable violence and brutality against women in Paupa New Guinea who are accused of being witches, I’ve been feeling pretty depressed and discouraged lately. I also finished listening to David Hillman on Voices of the Sacred Feminine, in which he issued a strong call to action to the pagan community and to “witches” in the U.S. to do something about this violence, essentially stating that it is “your fault” that we’re not protecting the children, and that rather than spending energy on having rituals to improve one’s love life (for example), modern witches should be taking to the streets and bringing abusers to justice. And, he asserts, the fact that they don’t, shows that they don’t really “believe”—believe in their own powers or in their own Goddess(es). I also listened to a subsequent show on pagan political activism that featured some great content along similar lines from Patrick McCollum. The basic message is action. Do something. As I do when I have questions or when I just need to listen, I went down to the woods* behind my house:

Goddess, what do I do when it all feels hopeless? 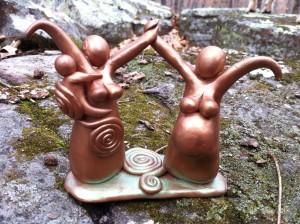 when the world feels forsaken
when everything feels at risk
when an avalanche of hatred and violence
threatens to sweep over me
and everything I hold dear?

Protect the earth
love the babies
hold the men
gather the women
give what you have.

When I came back inside from this woods visit, I added another Kiva loan to the three I already have going (two of which represents pooled monies from my women’s circle members). I chose a women’s cooperative in Pakistan with a craft business. I paid for the loan using my profits from selling my own goddess art. I also signed up to sponsor a woman in the Congo via Woman to Woman International. I also decided to make a donation to Patrick McCollum’s foundation. Maybe this isn’t “enough,” but it is something. I work hard to support women in my own community in a variety of ways and I have for many years.  And, I write all over the place…maybe that isn’t “real” help, or maybe it is, but I can’t stop doing it.

*I write a lot more about woodswisdom in my ongoing series of “Woodspriestess” daily posts.

*with thanks to the classic Dorothy Allison quote: “change, when it comes, cracks everything open.”

I also expanded on my thoughts about whether or not women’s circles actually matter in my post for the Feminism and Religion blog this month. 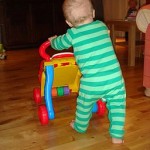 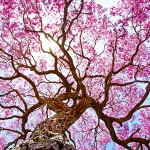