I really wish I’d had a book on what it means to become a woman when I was 12. The only text I had was Judy Blume’s generation defining book, Are You There God? It’s Me, Margaret. I wish that some one would have told me that my cycles would be erratic for a couple of years, not just in spacing, but in flow. Finding that out at a slumber party in the 8th grade was a deeply embarrassing experience (imagine having to knock on your friend’s parents’ bedroom door in the middle of the night, because your period started all of a sudden and has soaked through everything you’re wearing, and is running down your legs. Yikes.) I wish I had known at 15 what I know now about cramps – that certain foods can exacerbate them, that giving yourself some down time, instead of just ‘pushing through’, can help minimize them. I wish I had had the confidence then in my body that I do now. I felt shame when my cramps immobilized me. I just told people I was sick when I was found crawling on hands and knees to the nurse’s office through my high school halls because I was unable to stand up.

Because of my personal menstruation history I was looking forward to reviewing Jane Harwicke Collings’ book, Becoming a Woman, a book designed for girls on the cusp of menstruating and for the women who love them. The feminist in me loves that Hardwicke Collings does not talk down to her readers. She uses science to explain the biological process of menstruation. No fluffy language used here to talk about cervices, blood, and mucus! I like that females are encouraged to get intimately acquainted with their cycles, and not just in a calendrical sense; girls are encouraged to feel their way through their cycles and see how their bodies and emotions respond to different parts of the hormonal cycle. Women are encouraged to take days of rest. This is powerful, and empowering, stuff. 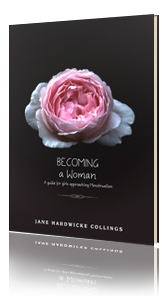 But surrounding all of that is terrible scholarship and a style of language that screams gender essentialism (women across space and time are like This because they are Female, men across space and time are like That because they are Male). I don’t know how to avoid some of the latter in a book written specifically about a female biological process. The long opening story is illustrative of the tone. In the story, a young girl is met by the Moon Goddess as she becomes a woman, and the girl meets the moon goddess every month for the rest of her life. It’s a beautiful relationship, but the Goddess tells her, “boys never get to meet me.” The Moon Goddess is for girls only.

There are issues with historical scholarship here, too. I cannot find any footnotes to back up her broad generalizations. Hardwicke Collings makes statements about “traditional cultures,” referring to red tents and moon lodges. What does she mean by “traditional cultures”? Which cultures had which? Not all “traditional cultures” had such things, and it was not usually a woman-centered joyful celebration, but rather a forced isolation to avoid communal contamination.

Another example: “Many matriarchal cultures conducted agricultural fertility rites in spring time with menstrual blood to ensure bountiful crops.” Oh yeah? Which ones? Hardwicke Collings also claims that the red bindi Hindu women wear used to be made with menstrual blood. As far as I know from my own religious studies (and a cursory glance around the internet suggests nothing different) this would violate every purity law that orthodox Hindus hold dear, even far back in the Vedic era.

There is an entire chapter on Herstory. While I am an ardent supporter of history from the feminist perspective, I can’t encourage a book that is so riddled with bad ‘feminist’ writing. I think it does feminism a disservice when scholarship is manipulated to suit one’s agenda, even though I ultimately support her overarching goals. There is plenty of legitimate history and anthropology out there to support a book like this.

I think girls (and boys, too) need coming of age rituals, and menstruation is an obvious choice for girls. Menstruation is a taboo topic in Western society. We’re encouraged to pretend it’s never happening, to push through any discomfort we might feel, to line the pockets of pharmaceutical companies with monthly purchases of pads and tampons, and to always smell like candy-coated roses. I completely support the aims of this book and Hardwicke Collings’ efforts to support women, but I would not give this book to any of my loved ones. I hope some one can take the best of this book (science, love of the female body, ritual ideas, and sacredness) and combine it with the best of feminism, not the worst. That’s the book I’d buy.

You can buy the ebook here for 10 Australian dollars. 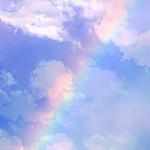 May 14, 2013
Four Simple Ways to Honor Spirit in Baby's First Year
Next Post