At this time of year, we celebrate the Winter Solstice, also known as Yule.  On the winter solstice, we may light candles and decorate our homes with suns to keep the light alive through the longest night of the year.  As the sun rises the next morning, we mark the turning point when the dark time is beginning to pass and the days will soon begin to get longer.

This is a wonderful holiday to celebrate with children, but can easily get muddled up with all of the attention placed on Christmas (and to a lesser extent, Hanukkah and Kwanzaa).  Below I share some of my favorite books which really speak to the Solstice itself.  It was hard to choose among the many great Solstice-themed books out there, so read through to the end for an additional list with a few more choices.  You might also look for books with some of these themes:

The Shortest Day: Celebrating the Winter Solstice, by Wendy Pfeffer 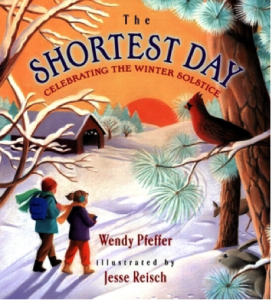 Wendy Pfeffer has written a series of nonfiction picture books about the Solstices and Equinoxes.  This one talks about what the Winter Solstice means from a scientific perspective, and describes the ways different cultures have celebrated the Solstice throughout history.  At the end there are a few crafts and science experiments (making bird feeders; observing the movement of shadows) that provide some seasonal activities.  The book is fairly text-heavy for a picture book and the vocabulary is advanced, so you may want to condense some parts if you read it with children younger than six.

Pagan Notes: It’s great to have a book that focuses on this holiday and shares the astronomical significance of the Solstice.  I like that it doesn’t cover Christmas or Hanukkah, just focuses on cultures who celebrated the Solstice itself.  One thing I didn’t like so much: the suggestion that ancient cultures were irrational and superstitious because they didn’t have modern scientific knowledge.  (“Some believed that evil spirits made the sun go away. People feared that the sun wouldn’t shine on them anymore.”) Did the Romans or the Incas or even prehistoric humans really think the sun wouldn’t come back every year if they didn’t perform their rituals?  These cultures most likely had a spiritual understanding of why their ritual practices were important, just as we do today.  That quibble aside, this is a useful and worthwhile Solstice read. 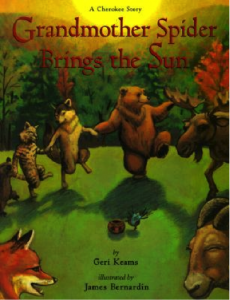 This Cherokee story begins a long time ago when one side of the world had sun while the other side was dark and “all the animals were always bumping into each other and getting lost.”  The animals on the dark side get together and scheme to steal a piece of the sun from the other side of the earth, but it’s not an easy task. Good thing they have wise Grandmother Spider to help them!  The book jacket notes that Navajo storyteller Geri Keams told this story to audiences of children for many years, developing her version based on their reactions, and the result is a wonderful book for reading aloud.  It smoothly blends foolishness and wisdom, humor and spirituality, and traditional and contemporary language.  The illustrations also bring humor to the telling, with slightly cartoonish animals, terrifyingly bright sun guardians, and a beautiful sun emerging out of Grandmother Spider’s clay pot. Recommended for older preschoolers and up due to length.

Pagan Notes: This would make a wonderful story to read on Winter Solstice night, as it conveys the experience of being stuck in the dark and longing for the brightness of the sun.  I love the moment when the sun spills out of Grandmother Spider’s bowl – this reminded me of watching the Solstice morning sunrise.  As a cultural note, when you read traditional Native American myths to your child, you may want to introduce some picture books featuring contemporary Native Americans as well, in order to teach your child about modern Native life and to counter stereotypes about Native Americans as a vanished mystical race.  You’ll find some great suggestions on the website of author Cynthia Leitich Smith (who wrote one of my family’s favorites, “Jingle Dancer”) and in more extensive detail at American Indians in Children’s Literature.

Lucia and the Light, by Phyllis Root 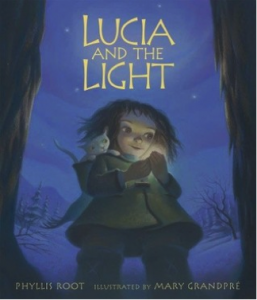 Lucia lives in “the far North” with her mother and baby brother.  One winter, the sun stops rising and the world stays dark.  Lucia goes out to find the sun and discovers that trolls have hidden it.  Through bravery, cleverness, and the help of her cat, she manages to defeat the trolls and bring the sun back.  This is a wonderful adventure tale with a great heroine. But be warned that the trolls are pretty scary – they look very menacing and they threaten to eat Lucia.

Pagan Notes: The story seems based in Nordic folklore (certainly the scenery and the trolls evoke a Norse setting).  This is a wonderful winter solstice book as, like the Grandmother Spider story above, it captures the feeling of being in the dark and cold and wondering if the sun will ever come back.

The pictures here really convey the mood of the story – the darkness and gloom when the sun is gone, as well as the dazzling light and warmth of the sun when it returns.  (As a side note, if the illustration style looks familiar, it’s because Mary Grandpre illustrated the Harry Potter books! ) 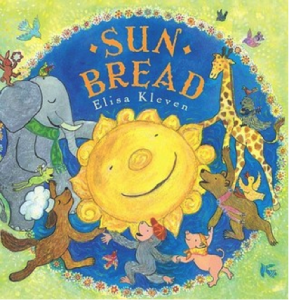 In this energetic rhyming story, the weather has been snowy and rainy for too long, and a town full of colorful animals is missing the sun.  A baker (who is a dog) decides to “make my own small sun inside” and bakes a loaf of beautiful golden sun bread.  This special bread brings together all the animals in the town and it makes them feel so good their singing wakes up the sun (who naturally wants to taste some of the bread).  A cheerful ode to the sun, good bread, and communities coming together.  There is a recipe for sun bread on the back of the book, which seems like a great Solstice eve baking project – I look forward to trying it out.  Appropriate for toddlers and up (young toddlers may not understand exactly what’s happening, but will enjoy the rhyming and the bright, busy pictures).

Pagan Notes: Another wonderful illustration of some Winter Solstice themes: community togetherness and finding the sun “inside” during the time of darkness.  Although it includes some mention of snow, this book might especially resonate for you if you live in a place where winter is more rainy and cloudy than snowy. 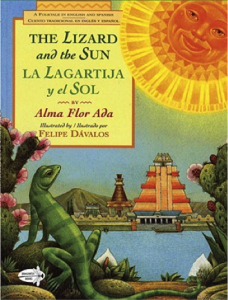 In this bilingual (English/Spanish) picture book, set in ancient Mexico, the sun disappears and everything has been dark for several days.  All the animals look for the sun for a while, but eventually they give up… except for one persistent little lizard who eventually discovers a rock which is glowing strangely.  She brings the (human) emperor and a woodpecker with her to see the rock, and together the three of them find a way to wake up the sleeping sun.  The illustrations bring to life the animals, the sun, and the Aztec setting (it seems like the city might be Tenochtitlan – there are floating barges carrying fruits and flowers) and I especially like the way the illustrator drew the kind-looking face of the emperor.  Appropriate for older preschoolers and up (the descriptions might be too long for younger listeners).

Pagan Notes: The author comments in her note at the end, “The indigenous people of America recognized the sun as the source of energy, warmth, and life.”  This story fits right in with our Solstice theme of finding the sun amid darkness.  The sleepy sun who doesn’t want to wake up reminds me of the way I feel on cold winter mornings when it is still dark out.  Also, this might be a nice one for those of you who live in warmer climates, as there is no snow! 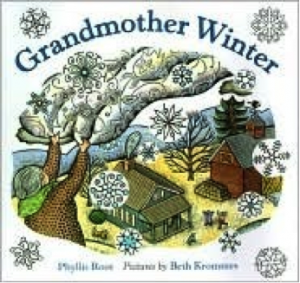 This book, by the same author as “Lucia and the Light,” describes Grandmother Winter gathering feathers from her geese during the spring and summer, then filling her down quilt with them.  As she shakes out her feather quilt, it makes snow fall in the world.  All the animals and people are settling in for the winter (“When Grandmother shakes her feather quilt, earthworms tunnel deep in the dirt.  Brown bats hang head-down, bundled in blankets of wings.”)  I love the scratchboard illustrations whose muted colors and cross-hatching give a strong sense of the textures of winter.  Appropriate for toddlers and up.

Pagan Notes: This book is based on the German legend of Mother Holly, which was collected by the Brothers Grimm (a great winter story which you can find in a picture book listed below, or in <i>Circle Round</i> by Starhawk, Anne Hill, and Diane Baker).  It really evokes the hard work that goes into preparing for winter, and then the wonderful rest that comes in the cold dark time.  The pictures of little animals sleeping all curled up in burrows, logs, etc., are enough to make you want to curl up under your own feather quilt and sleep the winter away!

Here are a few more books that you may appreciate for your Winter Solstice celebrations:

The Winter Solstice, by Ellen Jackson (about how different cultures have celebrated the solstice)

Sun, Moon, and Stars, by Mary Hoffman (illustrated collection of myths and legends about the sun, moon, and stars, from a variety of cultures)

The Everything Seed, by Carole Martignacco (creation story from the Unitarian Universalists, re-envisioning the “Big Bang” as the universe growing from a seed)

On the Day You Were Born, by Debra Frasier (shows the sun, moon, stars, tides, and animals moving through their rhythms with joy at a new baby being born)

…and because for me this time of year is not complete without holiday music, allow me to recommend sharing these beautiful Winter Solstice albums with your family:

“This Winter’s Night: A Celebration of the Winter Solstice,” by MotherTongue

Meg Yardley is a Pagan and a parent of two young children, living in the San Francisco Bay Area.  She sings with the Turning Earth Singers, a Pagan music ensemble which recently led a “Pagan Kids’ Song and Story Time” workshop. She appreciates pictures books as a wonderful spiritual practice parents and young children can share. 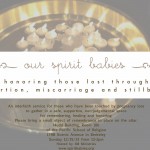