Like many Pagan parents, I do not live in a solely Pagan household. When you factor in extended families, it becomes incredibly rare for a child’s entire family to be Pagan. This can definitely create some issues, especially for those with families who don’t accept Paganism as a legitimate and positive religion. I’d like to take some time to talk about my own experiences in an interfaith household, and one way to navigate the sometimes thorny issue of children growing up around multiple religions.

Starting with just our immediate family, my husband is an Atheist and I am a hard polytheist Pagan. Thankfully, my husband is very supportive of my personal beliefs and rarely if ever makes a negative comment about them. One place where we run into trouble, though, is my explanation of the world vs. his. As an Atheist, he’s all about science – which is awesome, I love science too. But because science tells us that trees have no consciousness and there’s no such thing as a ‘spirit’, he has raised objections to me teaching our children these things. As an animist, believing that all things have inherent life or spirit, this is something that I can’t experience or talk about the natural world without mentioning. Saying “the grass wants some water,” is perfectly natural to me, but conflicts with my husband’s completely rational view of the world. 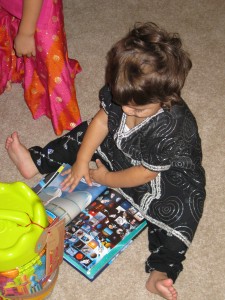 To get around this, we’ve agreed that scientific facts I talk about with the children will be prefaced with “science teaches us..” and anything more mystical I mention should be prefaced with “I believe..”. “I believe” has become sort of a magical phrase in our household, signaling to my daughter that anything afterwards is not necessarily true for everyone, and it is completely okay to disagree if that’s how she feels. I’ve met many parents who object to teaching children about religion at a young age, because they assume children can’t understand the difference between something that’s objectively true and something that’s spiritually true. In my experience, kids are perfectly able to understand the difference – they just have to be taught first. When I talk about my beliefs with my oldest daughter, who is six now, she occasionally disagrees with me, and enjoys stating her case and describing what she believes.
This magical phrase, “I believe..” also comes in as a big help with the children’s grandparents. My husband’s parents are devout Muslims, who read the Quran and do their prayers every day. My mother and step-father are staunch Evangelicals, who attend church twice a week and read devotionals every night before dinner. It’s an interesting mix. Both sets of grandparents feel a religious compulsion to share their religion with their grandchildren, because both are conversion religions. My in-laws have the added concern of passing down and preserving their heritage in the face of an American culture that encourages complete assimilation. So when my mother reads the Bible to my daughter, or my mother-in-law teaches her how to pray on the prayer rug, and both mention what they do is right, it can get confusing for a child. Early on, we taught our oldest daughter that everyone has their own religious truths: it is okay for them to believe they are right, and it is also okay for her to believe something different.

I also emphasize to my children that they don’t have to choose what spiritual actions to do in their lives. They can leave offerings to the house spirits with me, pray to Jesus with one Grandma and to Allah with the other, and that’s okay for them to do. They are children, and any deity worth the title won’t hold children responsible or become angry at them for following the traditions of their family.