Of Children, Paint, and Unplanned Sabbats 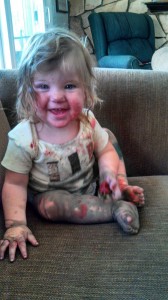 When Beltane came, we’d planned to dance a May Pole at my older daughter’s preschool.  Not exactly pagan, but I don’t know many pagan families locally, and the school May Pole was as close to traditional as we were going to get.  Well, my daughter lost all interest in it at the last minute.  Maybe it was because she’d gotten frustrated making her May crown.  Or maybe it was just too hot.

Beltane where I live starts summer.   The green spring grass gives way to gold, roses bloom and wildflowers spread their seeds.  It’s messy and hot, like the whole world’s gone sexy.  My Beltane rituals typically play with the themes of creative interchange and community, and the way I imagine them is full of the feeling of sweat.

We decided to skip the May Pole and headed to our friends’ house instead.  I taught them how to make sidewalk paints–1/2 cup cornstarch, 2 T flour, 2/3 cup water (or less, if you prefer it gloppy), and food coloring–and then the six of us looked for somewhere shady to paint.  Somewhere turned out to be across the street, on the sidewalk heading down to the beach.  The kids started mixing colors more and more intensely, painting the sidewalk and their bodies as I dabbled with paint and joked around with passersby.

My friend started to paint her face and suggested I paint mine, too.  That’s when I realized I’d slipped into magical time.  I was wearing the same shirt I’d worn to my first group Beltane ritual, eight years ago, when I painted my face a little too enthusiastically and it looked like a berry-stained mess next to everyone else’s polite swirls.  Now I started to say that I didn’t want to paint my face again, but interrupted myself midway–“Why not?”  It was foolish to let that experience make decisions for me.  Even so, my tentative paint marks worried for a mirror, until I offered to let my firstborn paint me with her hands.  Right away my face was wet with the color of blood.  She knew just what she was doing, and rubbed paints everywhere, until I was smiling out of the face from eight years ago.  When the kids were done, we poured a libation with the last of the sidewalk paint.  Colorful, creative, sensual, messy, communal–it was all the elements of Beltane.

This time I didn’t wash the paint off my face before I left.  I picked up our farm share on the way home and told everyone that we’d just been to an impromptu Beltane.  My baby painted her face with ripe strawberries until the lower half of it matched mine.  And we all proudly left our faces messy until bedtime.

Every Sabbat, I read other people’s plans and suggestions for celebrating with children, think about the season, and come up with beautiful ideas for what we’ll do.  Then we end up doing something entirely different.  It’s happened often enough for me to see a pattern here, and so even though Beltane is passed, I’d like to offer our experience as a different model for approaching ritual with babies and small children.  Rather than planning a particular activity that I need to wrangle the kids into–even fun, age-appropriate activities seem to take so much managing–I’ve started looking for the places in our lives where the Sabbat’s themes are already present, and finding ways to ritualize them on the spot.

As inspired by Catherine Bell’s work, “ritualizing” means putting a spin on an everyday activity that makes it seem special.  Ritualizing an activity lifts it out of the everyday and so helps us really see (or re-imagine) what we’re doing.  For example, sidewalk paint is a staple of our lives, but painting in public and pouring paint libations was new.  Not washing it off was new, too.  Those changes ritualized our sidewalk art at Beltane.  Here’s another example: I nurse my children all the time, but around Lammas, we nursed sitting in a mountain lake, with little fish nibbling our toes.  We left in renewed appreciation of our bounty.

Ritualizing illuminates where the sacred is immanent in our everyday lives, rather than presenting it as something we need to go out and find by doing something else.  I want show my kids–and myself– that the sacred is right here, right now.  Our spirits already flow with the Turning Wheel.  Our connections to it are waiting to be unfolded and drawn out, and they don’t need me trying to take charge of them.

As a pithy three step process, ritualizing Sabbats with my kids looks like this: Pick a day-to-day activity that resonates with the holiday’s spiritual themes.  Then change the activity’s time, place, participants, or materials to turn it into a special, better version of itself–also to accentuate the relevant themes. (What counts as “better” reflects your values, of course, and the contrast between familiar and ritualized versions of an activity will illuminate those values for your kids.)  Tell stories, say prayers, or make offerings to celebrate the holy as you find it there.

The place where this pithy description fails is that it makes it sound like ritualizing might be one more thing to plan, whereas I use the concept mainly as a framework for seizing the moment.  Being spontaneous about ritualization helps us stay porous to the tides and spirits of the world around us.  I hadn’t planned to paint ourselves out near the beach on Beltane, but the heat nudged us in that direction, and the heat made paint feel especially good.  The kids–being kids–responded readily to those pulls, and vetoed things they weren’t in the mood for.

Since having kids, I’ve found more spiritual relevance in the activities that unfold by their own logic than in the activities I’ve tried to orchestrate.  Even so, sometimes I feel like I should be creating a series of holiday traditions, something solid and rhythmic.  Then life shows up: the planner in me doesn’t connect readily to the sacred, and my four year old is exceptionally particular about what she wants to do.  She isn’t inclined to try an activity just because someone else would like her to, and she’s not fooled by being offered a list of choices, pick one. Maybe it’s a family trait.  Wanting to create my own rituals without anyone else in charge is how I ended up as a witch.  Why not pass on that creative tradition to my daughters?

Holding space for my children’s creativity opens a space for the unexpected, for bigger-than-me and magic, and that’s what happened at Beltane.  The gods and spirits of the place sometimes also manifest themselves in our sudden inspirations.  Beyond that, taking my four year old seriously as a real, creative ritual participant is a way of putting my money where my feminist mouth is: she’s a child, but she’s not an adjunct or an audience, and not someone the ritual is done “for,” ala mainstream consumer holidays or big events.  She’s someone who’s doing it.  (The baby, by contrast, is still totally an adjunct.)

Back before I had children, this isn’t what I wanted my ritual life to look like.  Then I remind myself, working within the real conditions of my life here and now might just be the most effective way to find the sacred.

C. B. Cabeen is a pagan who identifies loosely with Reclaiming.  Her spiritual work focuses on storytelling and parenting her four year old and one year old, but occasionally she finds enough time away from them to tweet for Pagan Families. 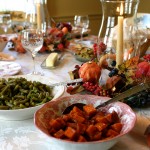 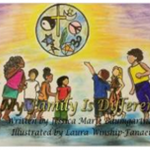 Hoodoo How We Do: Underwear Spells
Voodoo Universe
Related posts from Pagan Families