I’m not sure how I feel today. It’s impossible not to think about the tragedy of ten years ago, but I refuse to let anyone else tell me how I feel about it, or to shape those feelings. I paused early this morning to think about the attacks of September 11th. I live between two major airports and an Air Force Base, every time a plane has flown over the house I’ve been forced to reflect. At one point we heard a fighter jet pass over head, and I even became frightened for a moment, wondering if something terrible was happening.

What I refuse to do is what so many people want me to do, I refuse to relive the events of September 11th. I do not need to see those damned planes hit the Towers again. I do not need to re-watch the deaths of innocents. Those images are burned forever in my mind, like they are in yours, I will not forget, but I don’t understand the value in watching a snuff film over and over.

Nearly every network has some sort of 9/11 Rehash planned for this evening, but for what? Have we forgotten the heroism we all witnessed on that day? No. Have we forgotten the feelings of helplessness? No. Have we forgotten the uplifting moments that gave us hope in a time of unbearable grief? Absolutely not, and we never will. I don’t want to live in a world where the tragedy of September 11th is put on display once a year so people can feel good about themselves. We shouldn’t wear a ribbon one day of the year to commemorate those who lost their lives that day, we should keep those people in our hearts, prayers, and minds everyday.

I don’t like the false sense of unity that’s being sold today. Our country is more divided than ever, and the sense of unity we all felt after 9/11 eroded years ago. I was reading the Sunday Funnies today* and nothing there was funny. Every strip was a somber reflection of 9/11, playing up images of unity and patriotism that feel contrived. Is today the only day I’m supposed to love my neighbor? Are we expected to be patriots only in the face of death and loss? My flag is not a photo-op, it’s a symbol of the eternal American Dream, a dream that often feels more out of reach now than ever, yet still fills me with pride and love of country.

I don’t know why I’m so bothered today, but I am. The “remembrances” I’ve seen in the media have all felt phony, more like photo-ops than genuine reflections of grief.** I was proud to see the flags rolled out at the NFL Games today, but it felt expected, like an obligation. A real “9/11 Moment” is when we get to stand and applaud the first responders who were at Ground Zero or the families of Flight 93, and those moments should not be reserved for one day of the year. 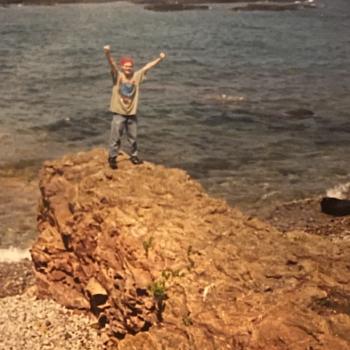 Pagan
No Man Is an Island: Remembering Dwayne Sortor
Raise the Horns
TRENDING AT PATHEOS Pagan