Antinous is the Reason for the Season

Today, Saturday November 27, is for most people in the U.S. the “day after Black Friday,” a non-descript day at one side of the “biggest shopping day of the year” in the lead-up to Christmas.  That happens to be the case this year, 2010; depending on when November 27 falls, it can be Thanksgiving itself, or one of the days before or after it.  Even to the majority of Pagans, it’s just another day. 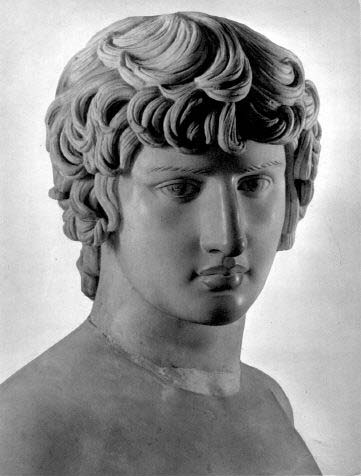 For myself, it’s a far more important day, and it happens every year whether or not the 27th falls on the day of, before, or after Thanksgiving.  It is the Natalis Antinoi, the birthdate of Antinous, and one of a very small number of festivals which have come down to us with certainty from the late antique cultus of the god Antinous.

Antinous (his name has four syllables in both the Latin form and the Greek form, Antinoös) was a young ethnic Greek man of Arcadian ancestry who was born in the Roman province of Bithynia, became attached to the entourage of the Emperor Hadrian, and was the Emperor’s youthful lover until his death in late October of 130 CE, when he drowned in the Nile.  Because of the customs of the day, drowning in the Nile conferred deification on whoever it happened to automatically, and so an immediate cultus of Osiris-Antinous came about; but because the Emperor’s grief at his loss was excessive, and the Emperor was the important person he was, the cultus ended up spreading all over the empire, where it persisted in some cases long past the “triumph” of Christianity in the late fourth century.

The Natalis Antinoi (“birthday of Antinous”) was celebrated by a collegium dedicated to Antinous and Diana at a temple in Lanuvium (near Rome) as one of their major feasts, and we also have record of it from an Egyptian cult calendar found on a papyrus fragment in Oxyrhynchus, held on the same day, November 27th.  It seems likely that other locations would have observed it as well.  The Lanuvium cultists celebrated it with a feast that was required to have four amphorae of good wine, bread, sardines, and warm water, and with oil provided by the quinquennalis of the society at the public baths beforehand.  The Egyptian text mentions that “horse rites” were a part of the festivities; in both Egypt and Greece, horse-racing courses were often located adjacent to temples of Antinous, and thus it was probably some sort of equestrian or charioteering competition celebrated in the god’s honor that was involved.

But, this year is also highly significant for another reason:  of the years that it is possible that Antinous was born, c. 110-112 CE, 110 is the most compelling to me for a variety of reasons.  Thus, this year marks the 1900th birthday of Antinous.  It is a rare occurrence to be able to celebrate the nineteen-century anniversary of a natal day, and particularly one which is connected to an historical cultus of which we know so many precise details of time and place of origin.

When Antinous died in late October of 130 CE, he would have been nearly twenty years old had he lived another month.  So, here it is, a hundred times his age at death later, and where is his status among the gods now?  Nowhere near what it could be, certainly, and yet I take hope in this situation all the same.  Some groups in Asia Minor were beginning their devotions to Antinous the God by the end of the year 130, less than two months after his death, and by the end of the next decade in 140, there were a number of temples and groups celebrating him.  If we think of this 1900th anniversary of his birth as a new beginning of his cultus, then I’m very hopeful that by the time of the 1900th anniversary of his death in 2030, he will be fairly well known again amongst modern Pagans.

Antinous has never been forgotten over the ages; his story has been misrepresented, censored, critiqued, and even lambasted, but never entirely forgotten.  His imagery appeared in the medieval period decorating the seal of a Christian bishop, and his distinctive and unmistakable face came to light again in the late Renaissance with Raphael and Lorenzetto’s Jonah from the early sixteenth century.  Archaeological finds and rediscoveries of his images since that time have been continuous, and his images were highly prized by collectors and art historians—in fact, the father of the discipline of art history, Johann Joachim Winckelmann, was highly influenced and inspired in his work by a few sculptures of Antinous in the collection of his patron, Cardinal Alessandro Albani, in the eighteenth century.

Antinous was a fascinating deity from a number of perspectives in his own time, particularly because of the promiscuous syncretism which was the hallmark of his cultus in many locations.  He was linked to deities and local heroes particular to every location in which his worship was found, from Hermes to Dionysos to Apollon to Silvanus, Vertumnus to Herakles and Osiris to Apis, Endymion to Eunostos to Androklos, and many more.  This process did not end with the “official” cessation of his cultus due to Christianity, though.  It continued in later centuries when his face was put into a statuary ensemble that became one of the most famous and frequently copied depictions of the Dioskouroi/Gemini twins, Kastor and Polydeukes/Castor and Pollux, now known as the “Ildefonso Group,” the original of which is in Madrid.  And it has still not ended…

Indeed, syncretism is a sign of a healthy polytheistic environment.  We live in a society now which is unparalleled in its access to information, to varying cultural streams, languages, and religious traditions.  This is similar to the late antique period in which Antinous’ cultus first came into being and thrived, only on a much grander scale.  Though dominant religions have changed, the ability of those of us in minority religions to localize our practices and customize them to our own needs and interests provides a very fertile ground in which Antinous can syncretize to a variety of contexts, and in which the forms he might take in the future can only be guessed at.  Just as localization in one’s own ecological environment and obtaining of food and other resources is becoming of paramount concern to many Pagans and polytheists who honor the earth and the elements, so too should deities honored be adapted to and draw from local traditions and environments, rather than proliferating from a central source and requiring a cohesive, institutional theological mandate or prescribed forms of worship.  Antinous as a hero or god can provide a link to the past, as well as a connection to the present and to one’s own environment.

It is at the threshold of such possibilities that I believe we are standing at present.  So, the best gift that I can give Antinous for his 1900th birthday this year is to leave it to him, the eternal nineteen-year-old, to determine what he wants to do with his (after)life as a hero and deity, in this new world and new age of syncretism and polytheism that is modern Paganism.

I hope that those of you who read this, if you have a moment, might do something today in honor of this occasion, even if you’ve never heard of Antinous before, or do not plan to have any sort of ongoing devotional relationship with him.  Ride a horse, go watch a horse race, or even ride on a carousel (no matter how old you are!).  Have a nice relaxing bath, or invite your friends over to your hot tub (if you have one) for a relaxing soak.  Eat a wonderful meal and raise a glass of your favorite wine to Antinous on this day, and sing the song—you know the tune, even if you don’t recognize the words—:

Sing for a polytheism and a world of possibilities reborn, not only for Antinous, but for all of the gods around the world; sing for traditions never forgotten, and traditions newly remembered and rediscovered; sing for new ways of approaching divine realities that are coming to being uniquely in our own times; and, most of all, sing for the truth that every one of us has the potential of becoming divine and the work of realizing our own divinity ourselves (drowning in the Nile entirely optional!).  As Antinous turns 1900, may we all remember in this season of the overculture’s religions’ holy-days of commercialism and excess that there are hundreds of reasons to be thankful and to have a holy season ourselves, within our own religion’s holy traditions.

November 28, 2010 Sometimes you just need to dance....
Recent Comments
6 Comments | Leave a Comment
Browse Our Archives
get the latest from
Pagan
Sign up for our newsletter
POPULAR AT PATHEOS Pagan
1

Ritual Of Hekate During COVID-19 For...
Keeping Her Keys
Related posts from PANTHEON