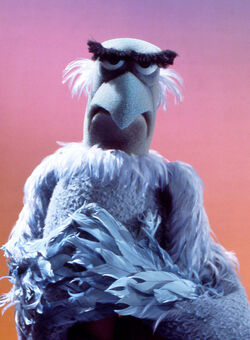 Note:  This is a piece by my good friend and colleague, Samus Aquilus.

A recent statement by the Sesame Workshop, regarding my fellow countrymen, Bert and Ernie of Sesame Street, runs as follows:

Bert and Ernie are best friends.  They were created to teach preschoolers that people can be good friends with those who are very different from themselves.

Even though they are identified as male characters and possess many human traits and characteristics (as most Sesame Street Muppets™ do), they remain puppets, and do not have a sexual orientation.

This statement was made in relation to the recent suggestion that because New York state law has now allowed recognition of same-sex marriages, that the two longtime residents of that particular neighborhood thoroughfare so beloved of children (which is in New York city) should get married in a show of support for such a legal affirmation of human diversity.

While I agree that Bert and Ernie, like myself, are Muppets and therefore are not human, I completely dispute the statement that we do not have sexual orientations.  My esteemed but often misguided colleagues Kermit the Frog and Miss Piggy are a case in point.  An even more disturbing case in point is Gonzo and his long-term relationship to Camilla.  It is truly sad that an eligible and admirable female avian has been enticed into the heights of vice with such a disreputable figure as Gonzo, and yet it is her right and her liberty to be in such a relationship.  I may not approve of it, but my disapproval does not mean that it does not exist, or cannot exist, and thus I must conclude that the weirdest excesses of sexual orientation do in fact exist amongst my fellow Muppets.

Further, I must ask the necessary rhetorical question and demand that if Muppets do not have sexual orientations, then from whence do Muppet Babies come?

If Bert and Ernie are not in fact a homosexual couple, then I must seriously question the following documented occurrence of their long cohabitating life:

Even the most obsessive-compulsive roommate rarely shares concerns about what one does in one’s own bed, and how what one does effects the sheets and subsequently the pyjamas and then body of that bed’s occupant as Bert does here.  His concern for his “best friend”’s bodily well-being goes far beyond that of mere friendship, or even “best” friendship.  Indeed, Ernie’s easy answer for the situation suggests far more that the nature of their relationship ought to be more obvious and accepted on the part of their ostensible managers, even if Bert still seems to object to it when the cameras are rolling.

Furthermore, I suspect there are many more couples with some sort of homoerotic connection amongst my fellow countryman than at first imagined.  Consider Doctor Bunsen Honeydew and his assistant Beaker, for example.  The Doctor, like so many in the elite liberal academic establishment, evinces a certain effeminacy, and his assistant does this to an even more excessive degree.

How convenient for the good Doctor as well that his assistant cannot speak properly to tell the authorities of all the non-consensual fetishistic and sadistic excesses on the part of the Doctor, though the fact that Beaker has not left the situation leads me to believe he has at least some consent in the matter.

One could speculate much more extensively on other members of my community, but I will leave it at this for the present, and rely upon the depraved imaginations of you who might be reading this to fill in the necessary details on the debaucheries of Oscar the Grouch’s subterranean dwelling, or the terrors of the thunder-and-counting-echoed halls of a certain self-amused undead Count.

Though I loathe doing so, I must conclude at the end of the day that even I, like all of those in my community of Muppets, share the characteristic of having sexual orientations, as well as being by human standards “queer,” since there is not one among us who is able to speak and to become truly him-, her-, or itself without the intervention of a human limb within a certain orifice which propriety prevents me from mentioning by name in a public forum.

August 17, 2011 13 Things I Like About Islam Revisited
Recent Comments
18 Comments | Leave a Comment
Browse Our Archives
get the latest from
Pagan
Sign up for our newsletter
POPULAR AT PATHEOS Pagan
1

Ritual Of Hekate During COVID-19 For...
Keeping Her Keys
Related posts from PANTHEON