The First Converts to Paganism

Most Pagans living today in the West are converts. We were either raised without religion, or we are apostate Christians, Jews or Muslims. We tend to view the conversion to Paganism as a modern thing, but this is not so. There are two famous converts to Paganism in antiquity.

Julian the Philosopher, known to Christians as Julian the Apostate, was raised Christian but abandoned it as young man in favor of Hellenic worship. A half-nephew of the famous Constantine (whose own devotion to Christianity has been questioned by scholars), he became the last Pagan emperor of Rome.

As a relation of the emperor, Julian was given the finest Christian education available. The finest minds in the Church were available to him. He was a learned man, and by careful study and consideration he came to the conclusion that the natural religion of Rome was the correct one. It was Julian who restored Pagan temples, who began work to restore the Jewish Temple in Jerusalem, and who outlawed the hypocrisy of teachers praising Pagan philosophers contributions to Christianity with one hand while condemning them as ignorant and vile for their Hellenic religion with the other.

Julian stood on the knife’s edge of history, and had he lived Christianity may have been no more than a curio among the world’s religions. Yet even the wisest of rulers make stupid mistakes, and his was in thinking he could conquer Persia after countless Romans had failed at that over the years. Had he remained content to stay at home and govern rather than brave the battlefield, the entire history of the world would have been very different. For more information on Julian check out The Julian Society. 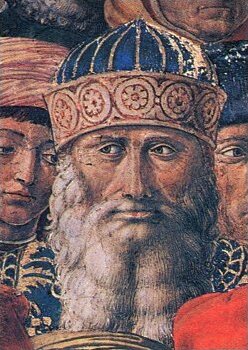 One of the shining intellects of Byzantium, Plethon was raised in a world that was thoroughly Christianized. Yet his love of the Greek philosophers and dedication to their teachings led him to adopt and teach Hellenic polytheism. Despite having rejected Christianity, Plethon was often asked to advise on church matters due to his reputation as a wise and moral man.

Plethon taught, and engaged in a series of opposing lectures with, the Patriarch of Constinople. While the Patriarch, like many church leaders, preferred Aristotle, Plethon was a champion of Plato, opening Platonic schools and advising Platonic ideas to reform the economy, legal system and government. Towards the end of his life he founded a mystery school that taught polytheism. When he died his body was stolen by his Italian students and laid to rest in a temple built by one of his students. Full of geometric and zodiacal figures, the Tempio Malatestiano was declared by Pope Pius II to be “full of pagan gods and profane things.” You can find more on Plethon at Apuleius Platonicus’ Egregores blog.

Julian and Plethon are only the two most famous examples of converts to Paganism in antiquity. Both had their students and admirers. We know of both of them simply because they were too famous to be swept under the rug. Some days when I find it difficult to be a convert, to come to grips with embracing Paganism in an overwhelmingly Christian society, I look back to Julian and Plethon. Both went through the same process every modern Pagan has gone through. Both had to research and reclaim their birthright. Both had to defend it articulately. Both had to find a way to communicate it to an audience predisposed to misunderstand and revile their religion. Both went through the process of self-discovery and anger that conversion entails.

It is true that our movement is but a few generations old, but we are not alone. A path has been blazed for us if we will take the time to look. We are not the first converts to Paganism, nor will we be the last.

August 13, 2011 13 Songs for the Full Moon
Recent Comments
21 Comments | Leave a Comment
"I"m an ASPIE and fall dead center in the "Geek Triad" as mentioned but with ..."
networkadmin The Spiritual Component of Autism
"If you have not already discovered this, if you want a Pagan temple, go to ..."
Aidan Kelly My Hopes For The Future of ..."
"I will miss you and your posts SO MUCH, Star. You are amazing."
Simon Jadis So Long, And Thanks For All ..."
"One of the festivals I've attended a few times was just that - Paganstock in ..."
Lori Dake My Hopes For The Future of ..."
Browse Our Archives
Related posts from PANTHEON